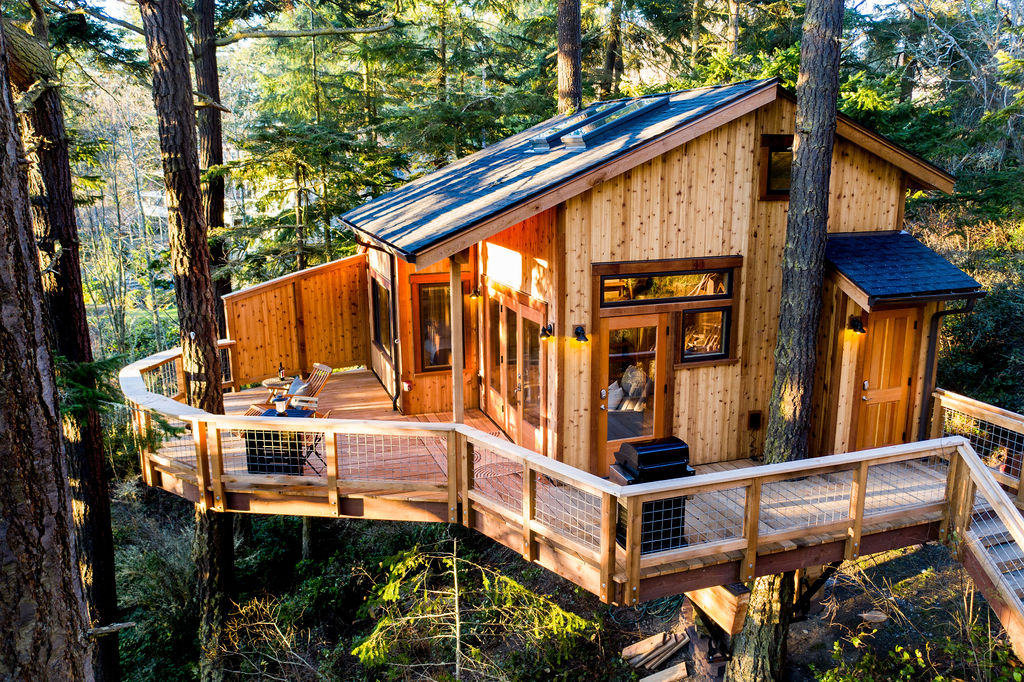 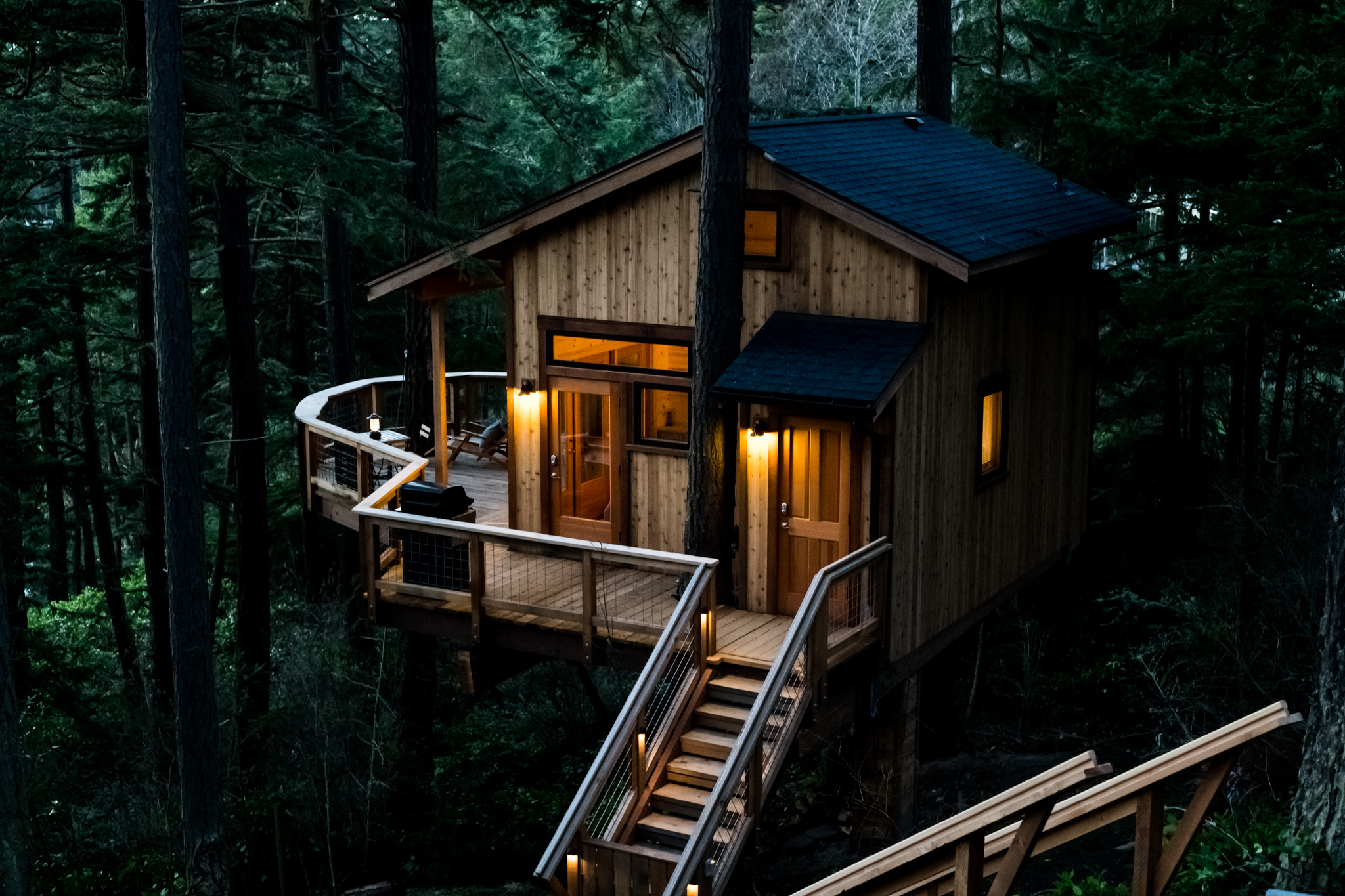 It’s May here on Whidbey Island and light drips through the moss like honey. Ferns grow large here, taller than the Subarus and not so far off in the distance an ocean is crashing like a noise maker, only better because this one is real. A lake glitters as the sun presses upon it. Out here it’s hard to imagine anything more magical than the PNW in the springtime. A chorus of bald eagles float in the ocean breeze as if suspended by a puppeteer. And just when you thought it couldn’t get any better, it hits you like a southwest swell: a Nelson Treehouse nestled high, hugged by Cedars and Coastal Douglas Firs.

Life is beautifully slow here, making it the perfect pinch-me spot to rest one’s city bones or sit and drink a glass of wine while reading a book of poetry. Then again, you kind of become poetry when you’re hanging out underneath a canopy of ever-greens breathing this salty mountain air. 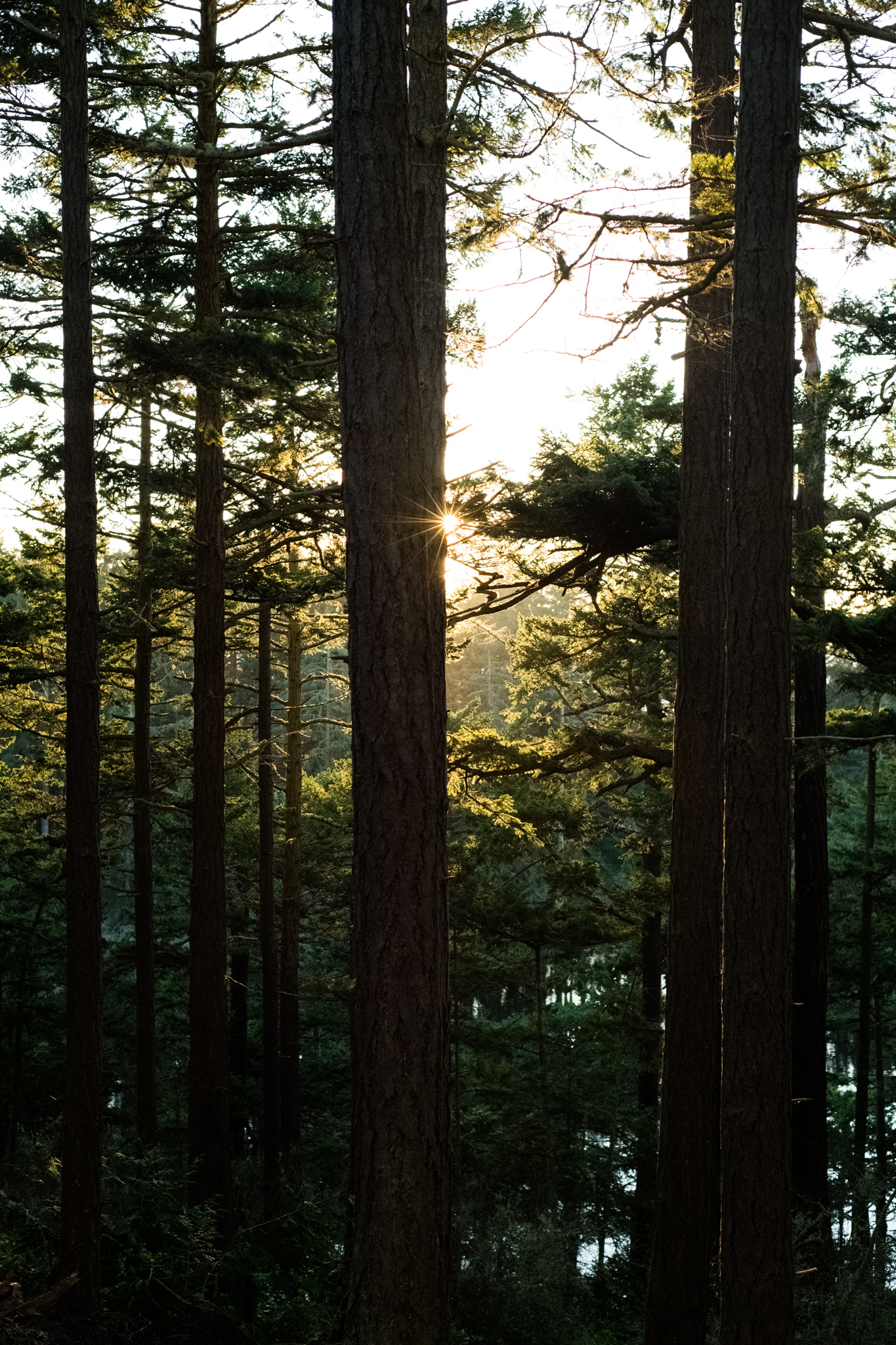 I got to sit down with Toby Maloy, one of Nelson’s project manager’s on this beautiful treehouse to talk about design, materials, hardware and the nitty gritty details we’re all dying to know. 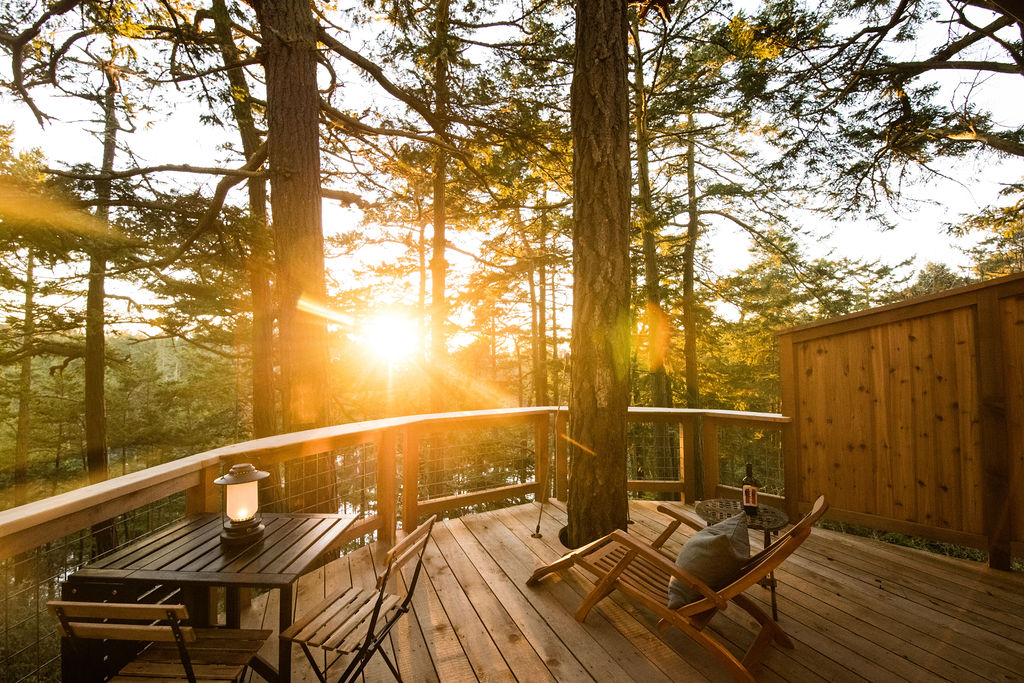 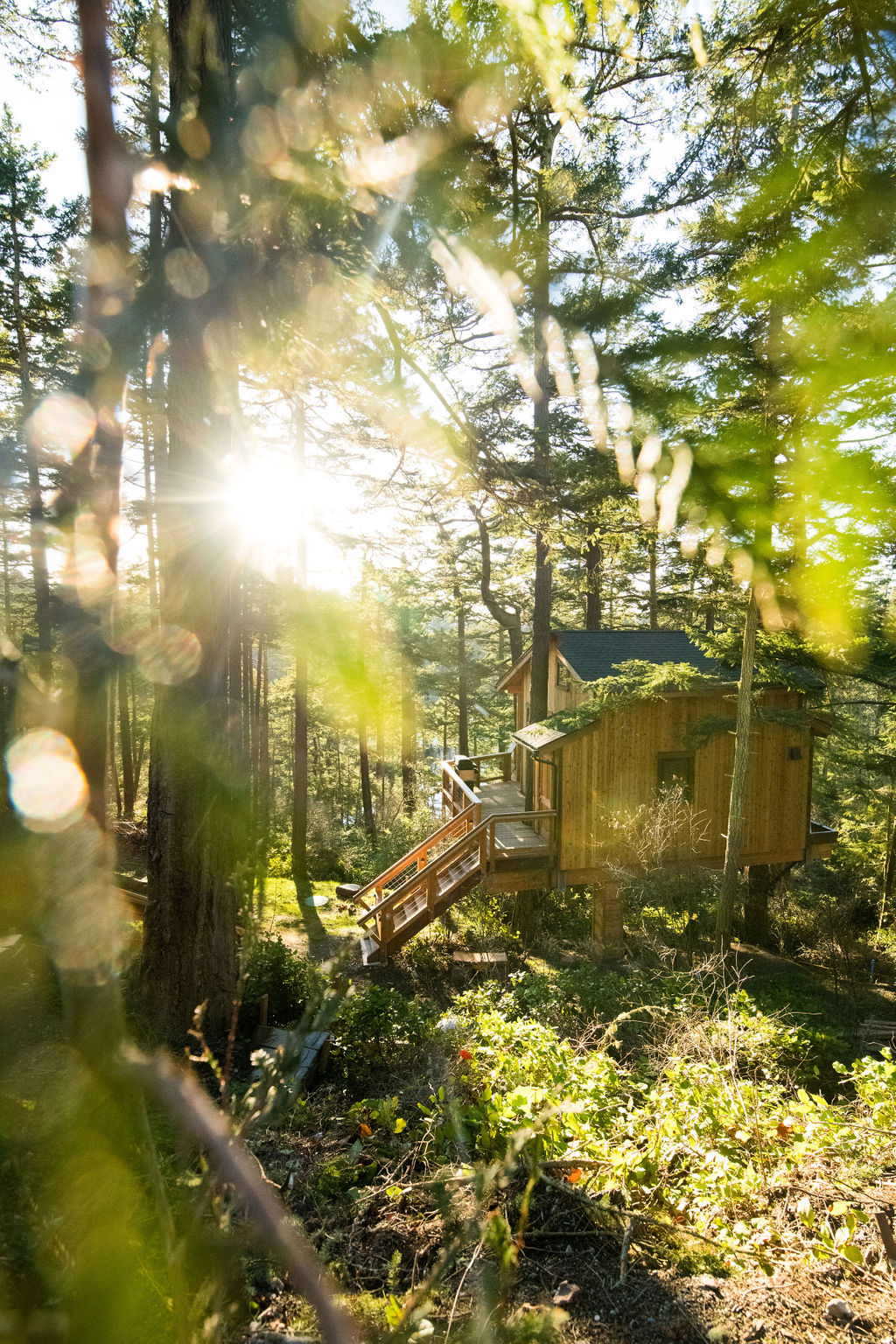 “The treehouse is a Pete Nelson design. The platform area is about 635 sq ft in 3 coastal Douglas Firs estimated to be about 120 yrs old. The treehouse itself has 555 sq ft of floor area. The treehouse, per usual, is wood outside and wood inside.” 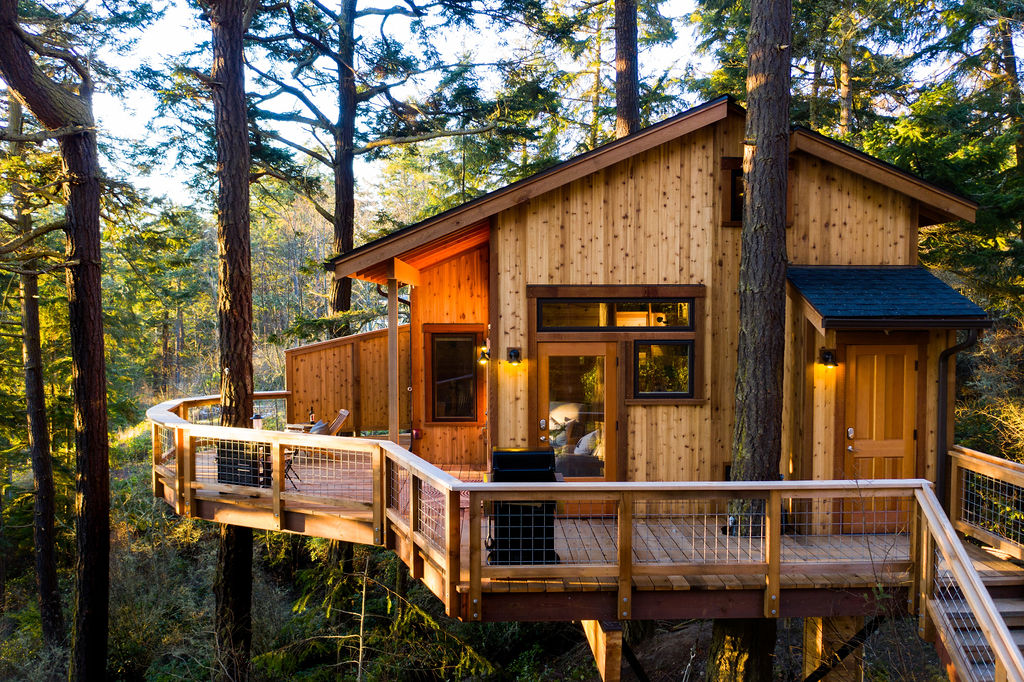 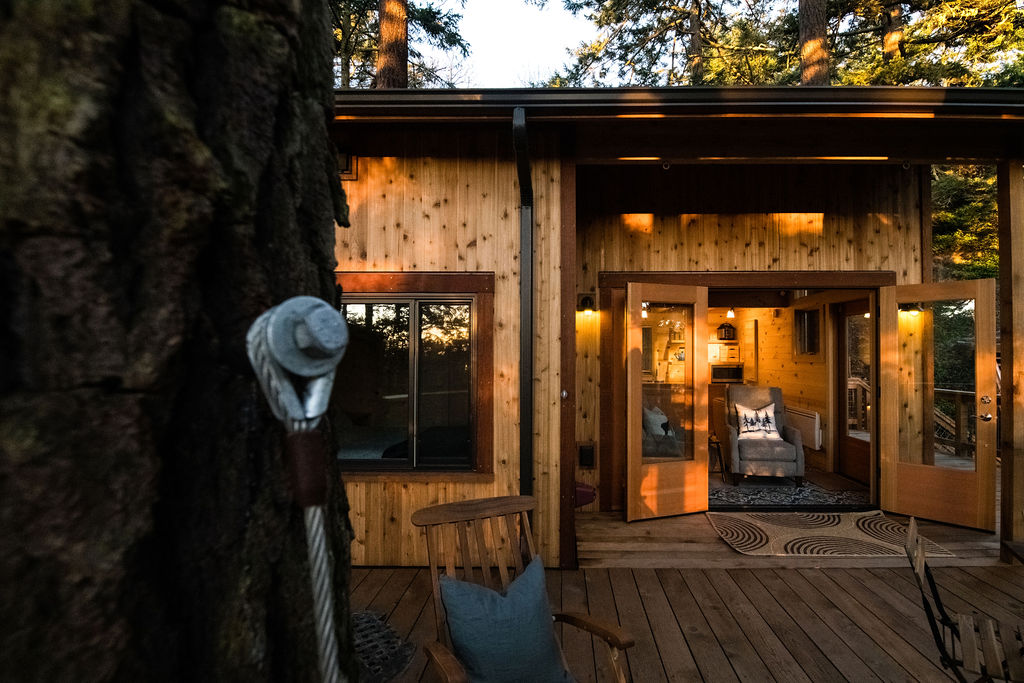 Nelson Treehouse always seems to use wood with a good story, I’d expect this treehouse has some tales to tell.

“The exterior of the treehouse is good ole tight knot western red cedar but the exterior decking is cut from old growth float logs pulled up from Lake Union in Seattle.” 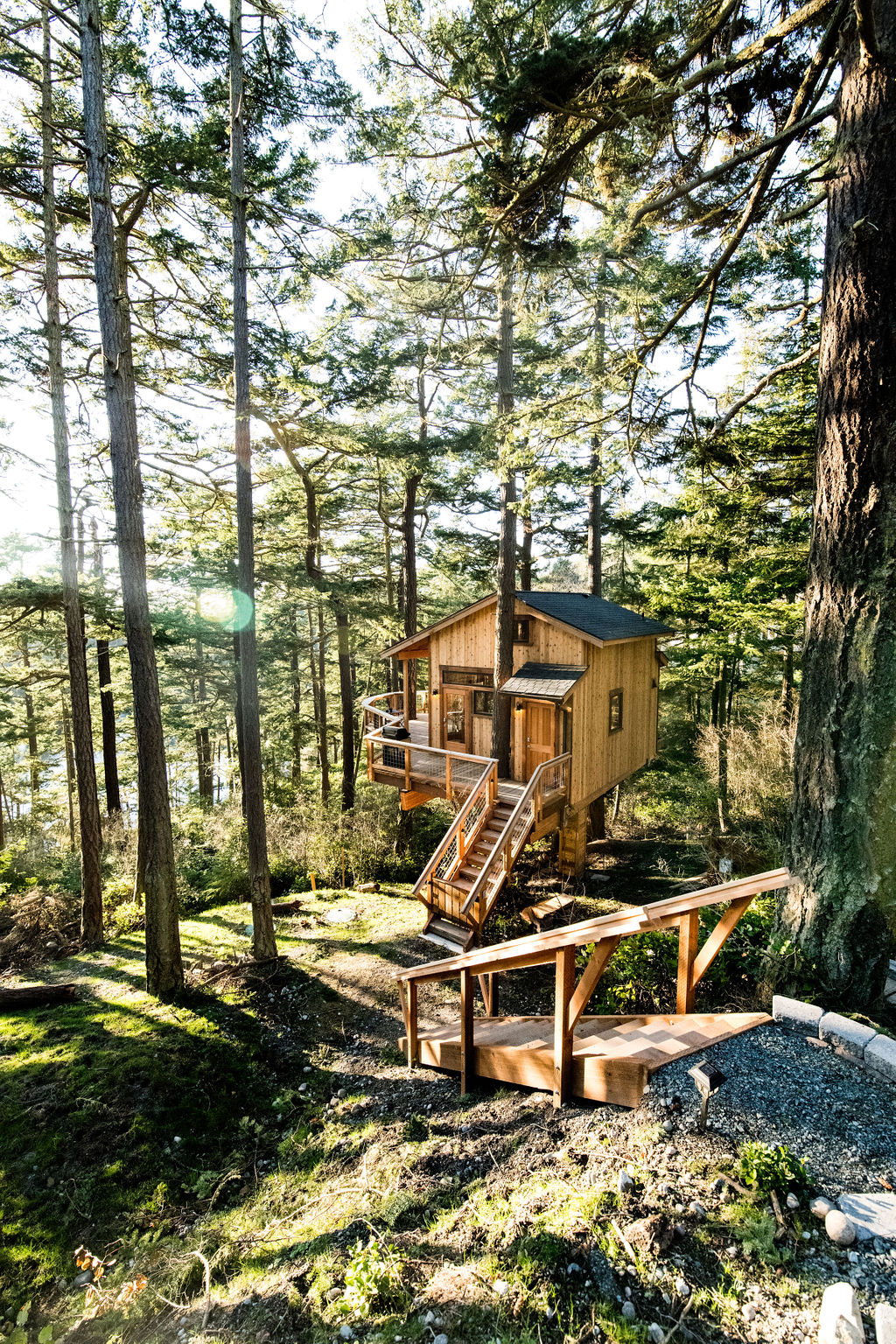 What about that beautiful interior paneling? It seems to have a uniquely blue hue to it.

“So the interior is Pine. The ceiling and some wall areas are Beetle Kill Pine from Oregon. Often referred to as Blue Stain Pine. The Mountain Pine Beetle is killing vast areas of pine forest in eastern Oregon and the wood is harvested after the trees die. The blue staining is caused by a symbiotic fungus introduced by the beetles.” 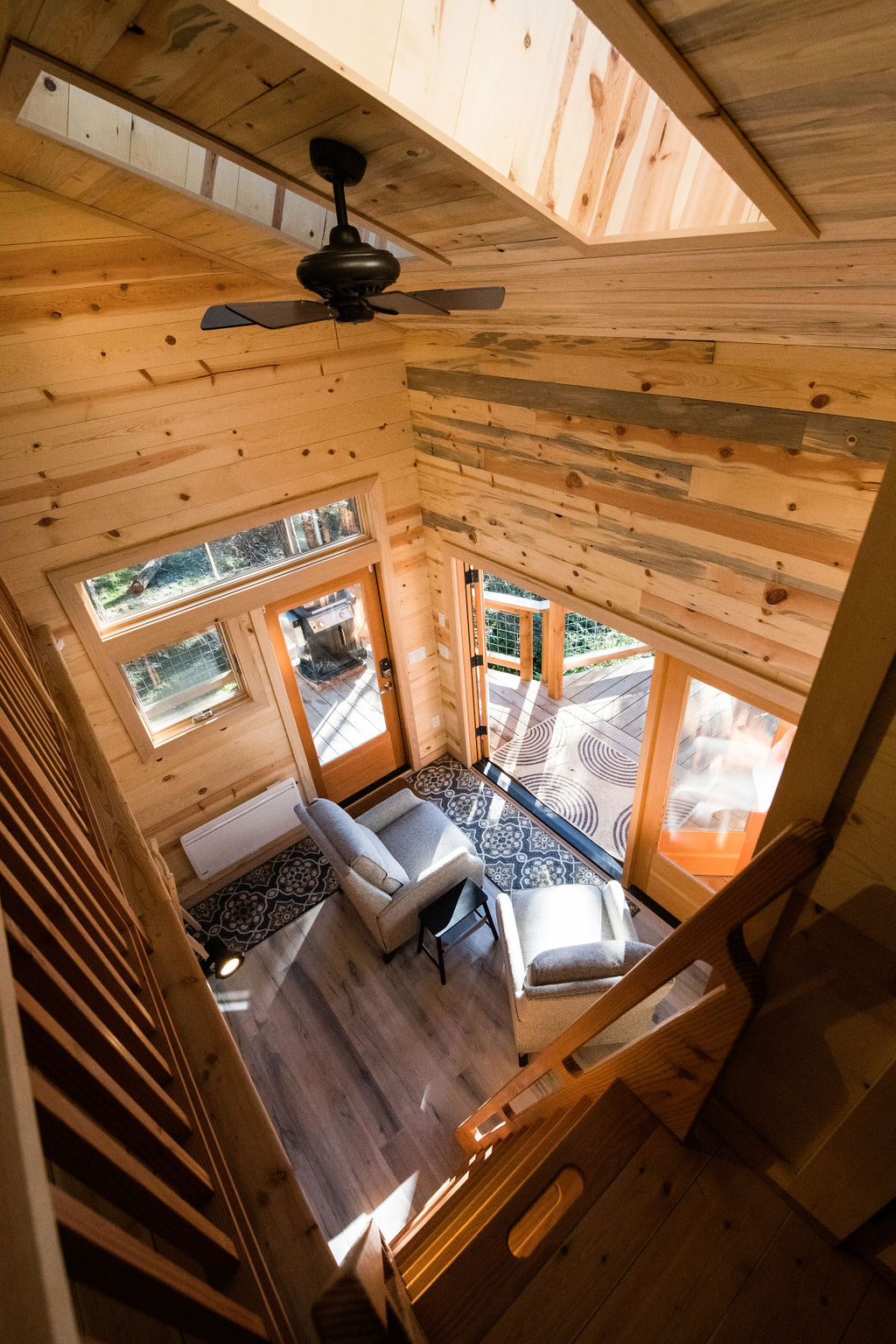 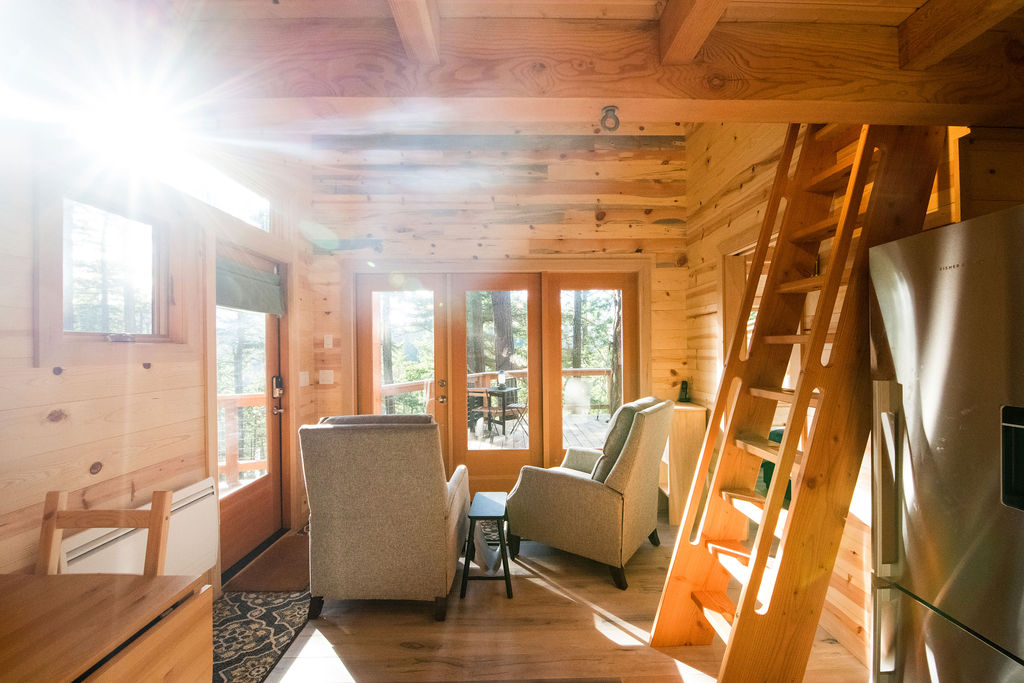 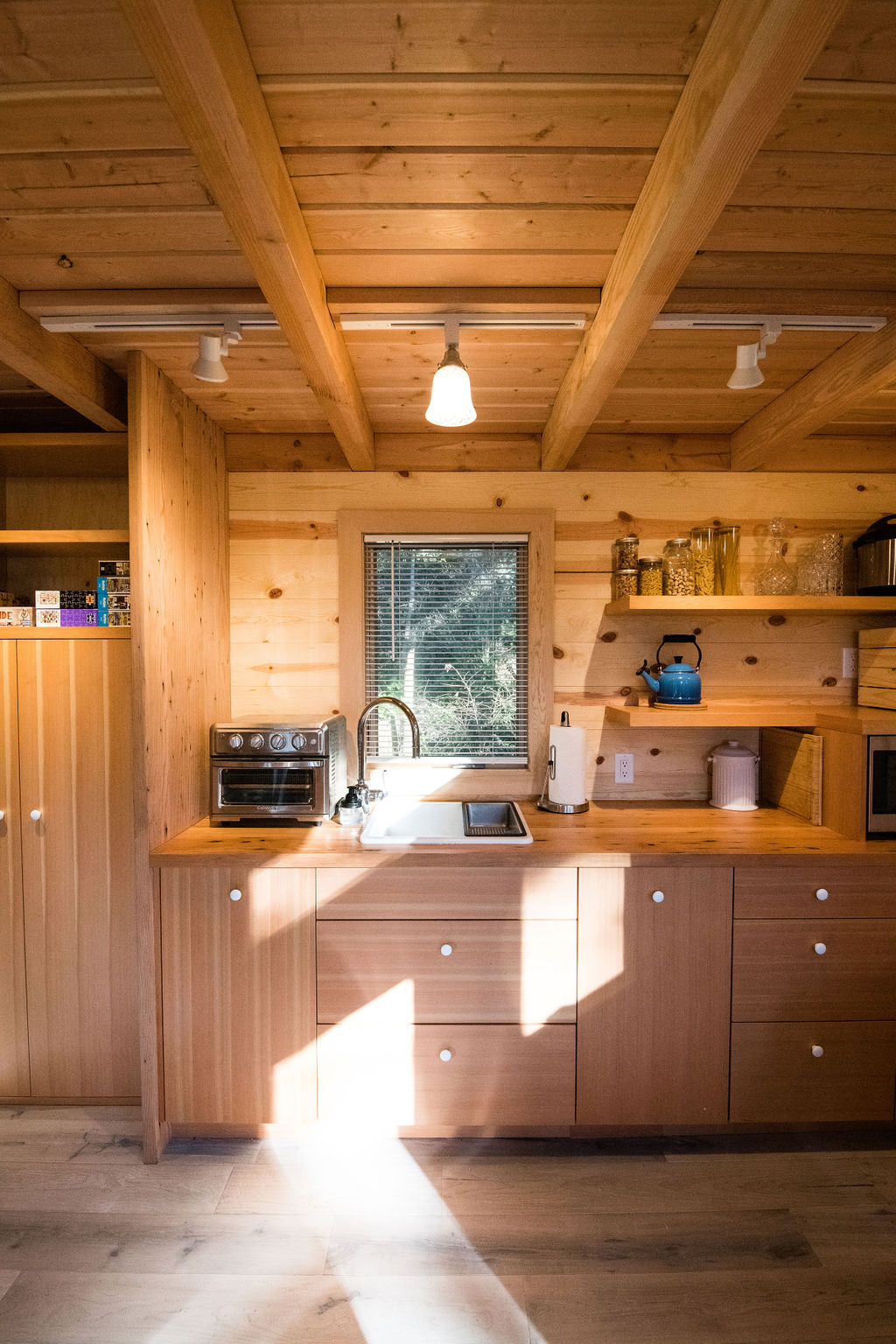 I’d tell you the joke about the beetle Toby, but insect puns really bug me. Earlier you mentioned this treehouse was built using 3 coastal Douglas Firs, can we chat a little about the engineering of this particular treehouse?

“The treehouse’s main support system centers around a pair of what we call Diamond Frames, in the two trees that the treehouse sits between. A pair of Diamond Frames allow for two beams to be placed out further from either side of two trees to create a large building area. Diamond frames can be built to take substantial weight as long as the trees will allow for it.” 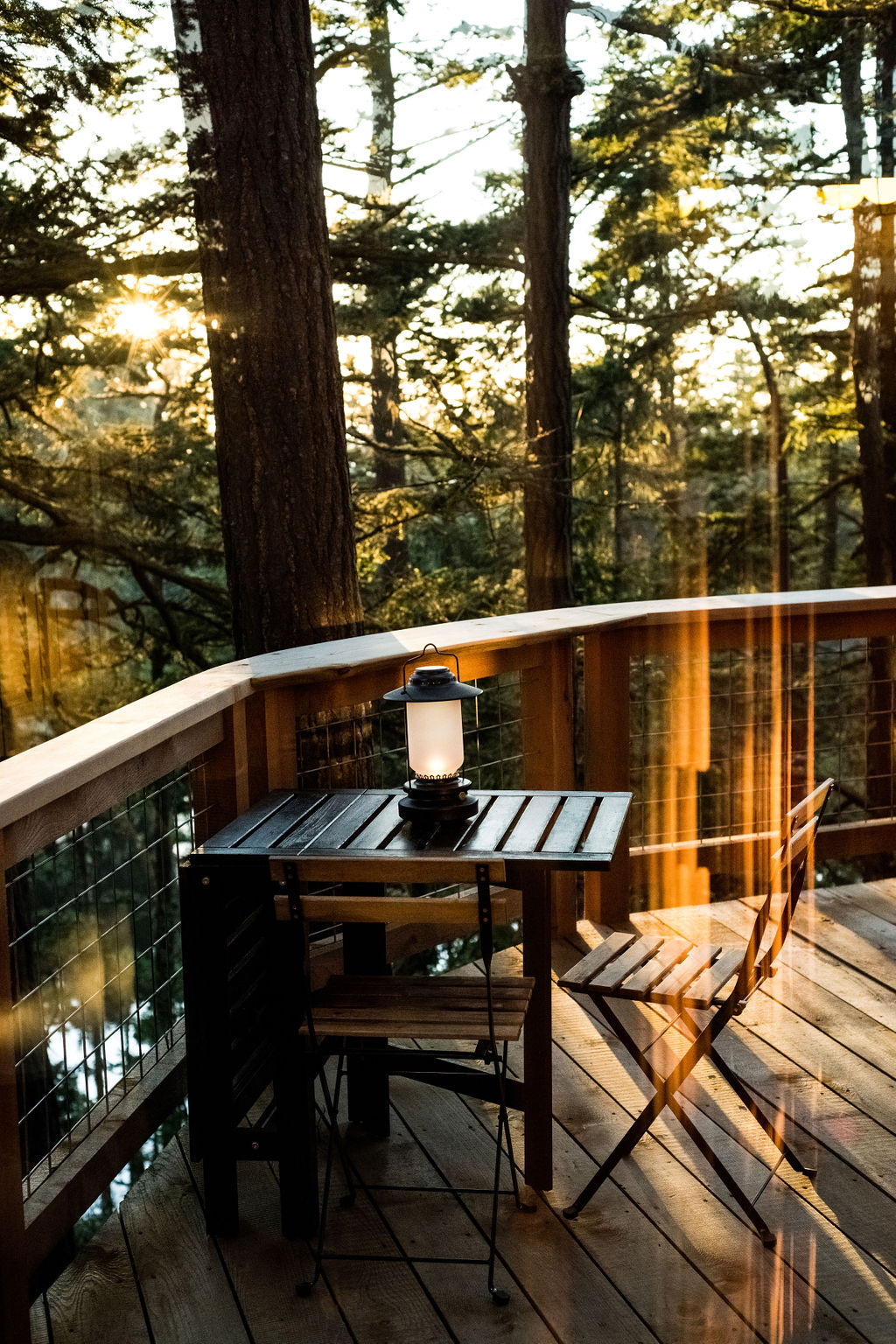 Speaking of weight, is there any way to estimate the weight these trees are holding?

“Can’t speak to the actual dry weight of the treehouse itself… more to the engineering design values and the associated loads at each tree connection based on those values. In other words, given the weight of the treehouse materials, if you threw a packed house party while there was two feet of snow on the roof during a windstorm, how much would the platform, therefore the trees and tree connections, need to withstand? The hardware in Tree #1 is engineered to a load value of 36,700 lbs, Tree #2 – 38,200 lbs, and Tree #3 – 14,200 lbs. The treehouse sits primarily between trees 1 and 2. Tree 3 supports mainly deck space.” 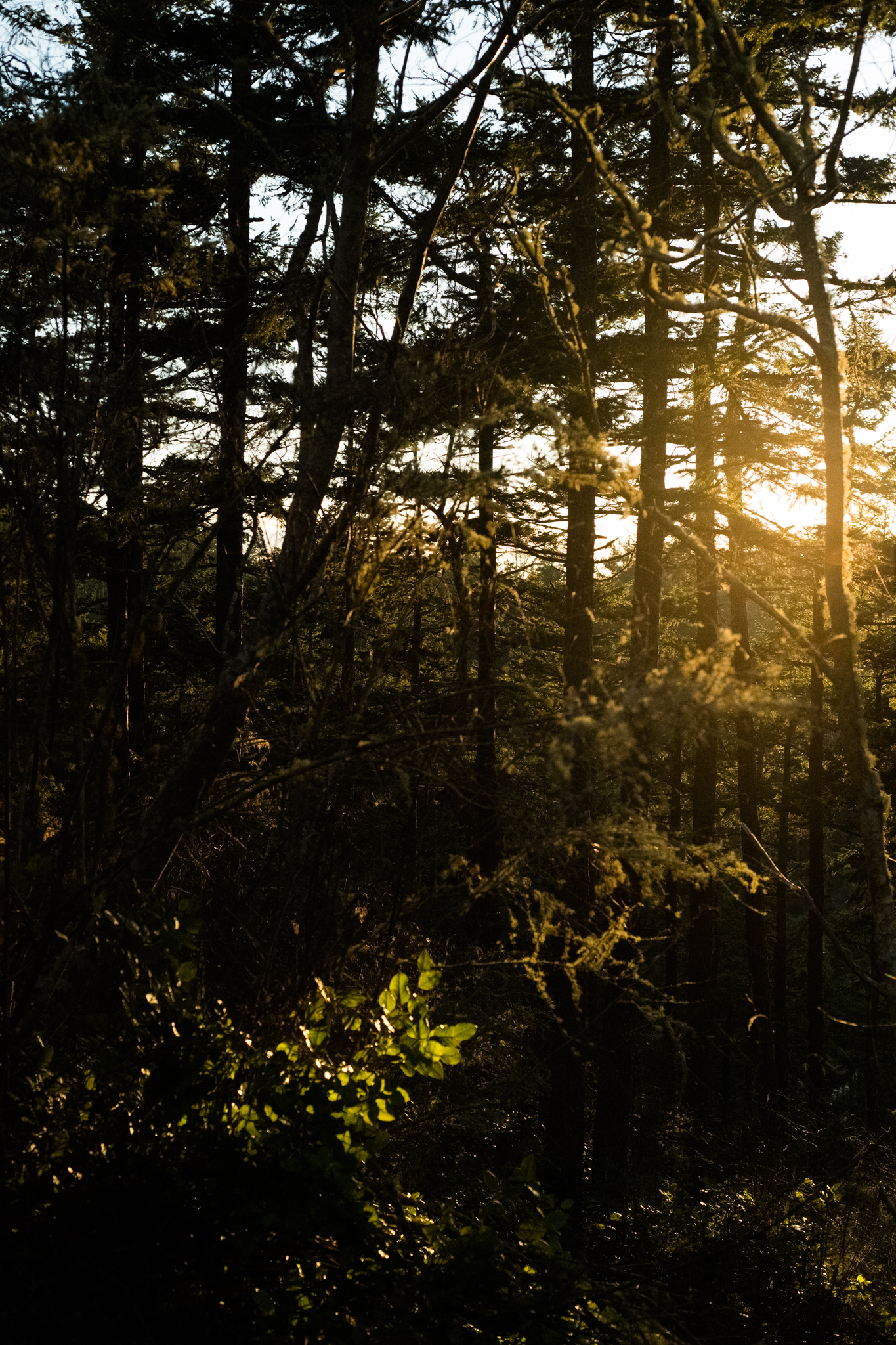 Toby, over your years with Nelson Treehouse,  you’ve helped build so many different kinds of treehouses. What did you love about this one?

“Love this treehouse for its outstanding location. It’s at the end of a dead end private driveway and bordered to the south and west by Fort Ebey State Park. The driveway is literally a trail head into the park. Miles of hiking and biking straight from the treehouse, 1/4 mile walk to the beach, old growth forest and Great Horned owls, saw a pair last week when I was up there.” 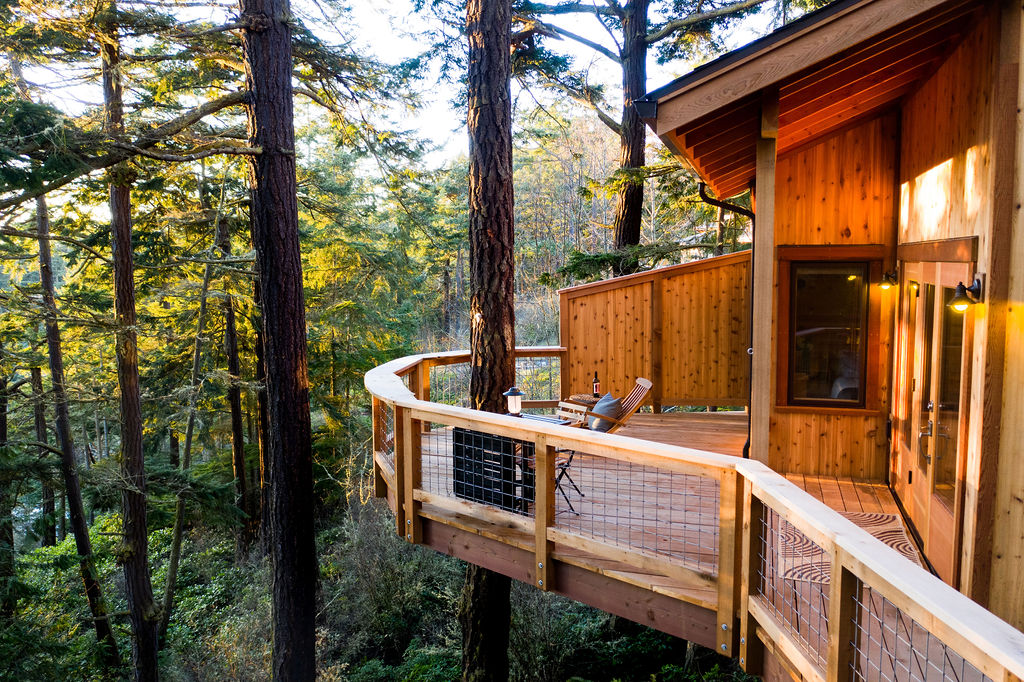 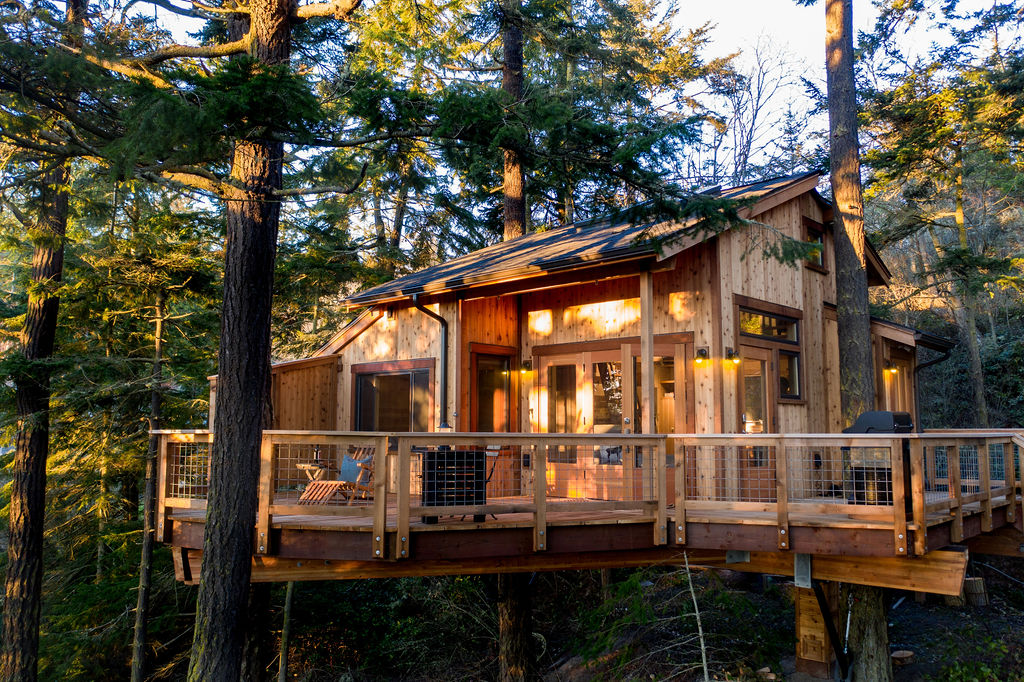 I was lucky enough to go out and photograph this treehouse and see it in person. I got to sit on the high deck and watch the sun go down, truly time did move slower up there so close to the canopy. While I was there I met the owners Jeremy and Kelley. We got to talking about how this treehouse came to life.

Jeremy explained, “since our property is on a really steep slope, traditional building would [have] present[ed] a challenge, requiring [us] to level the landscape and gut the natural beauty and charm.We wanted to preserve as much of the natural landscape as possible so we decided to use the trees to our advantage and build a treehouse!” 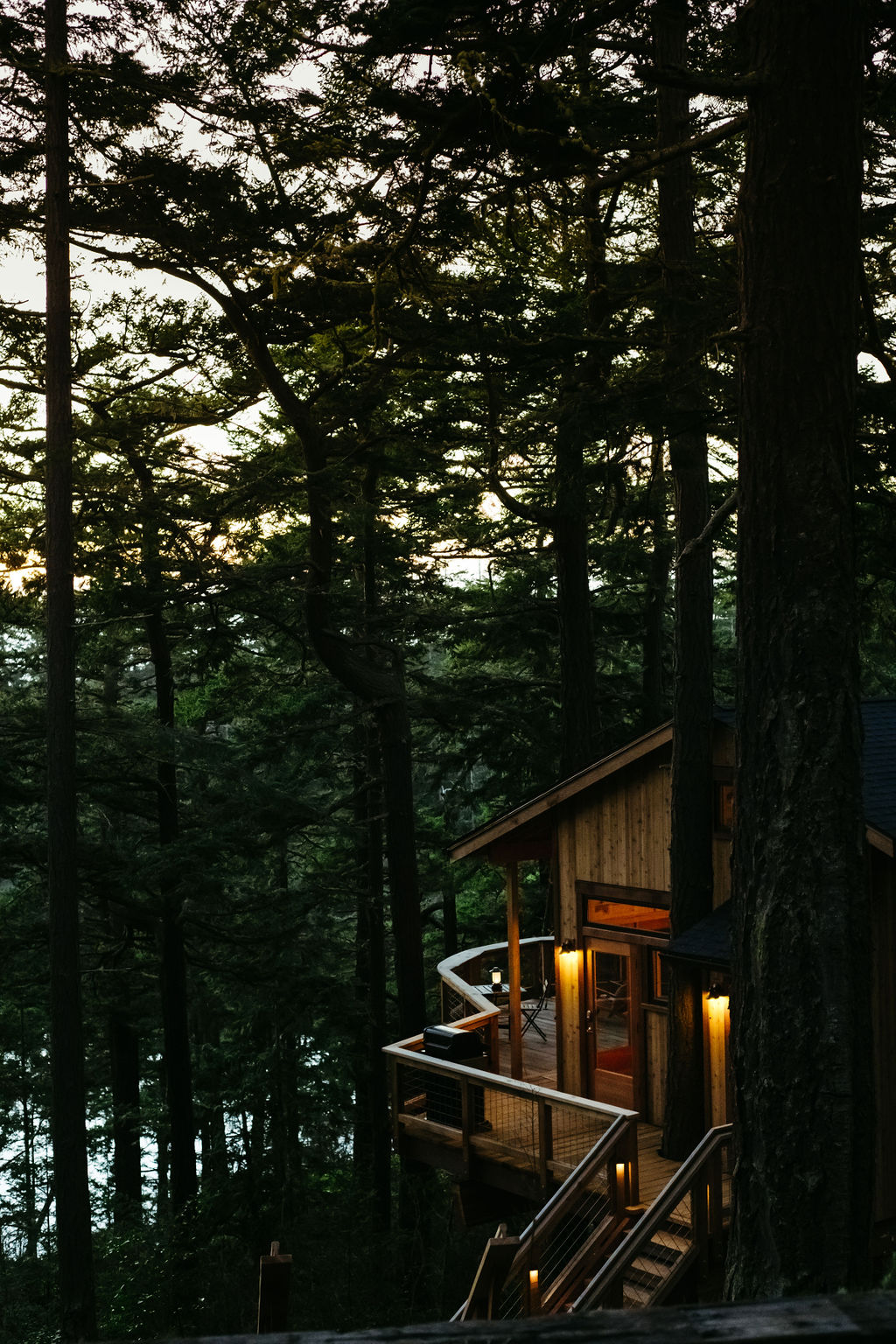 Well, I certainly think they made the right choice. After all, what’s more magical than a treehouse glowing under a sea of moss and cedars in the springtime? 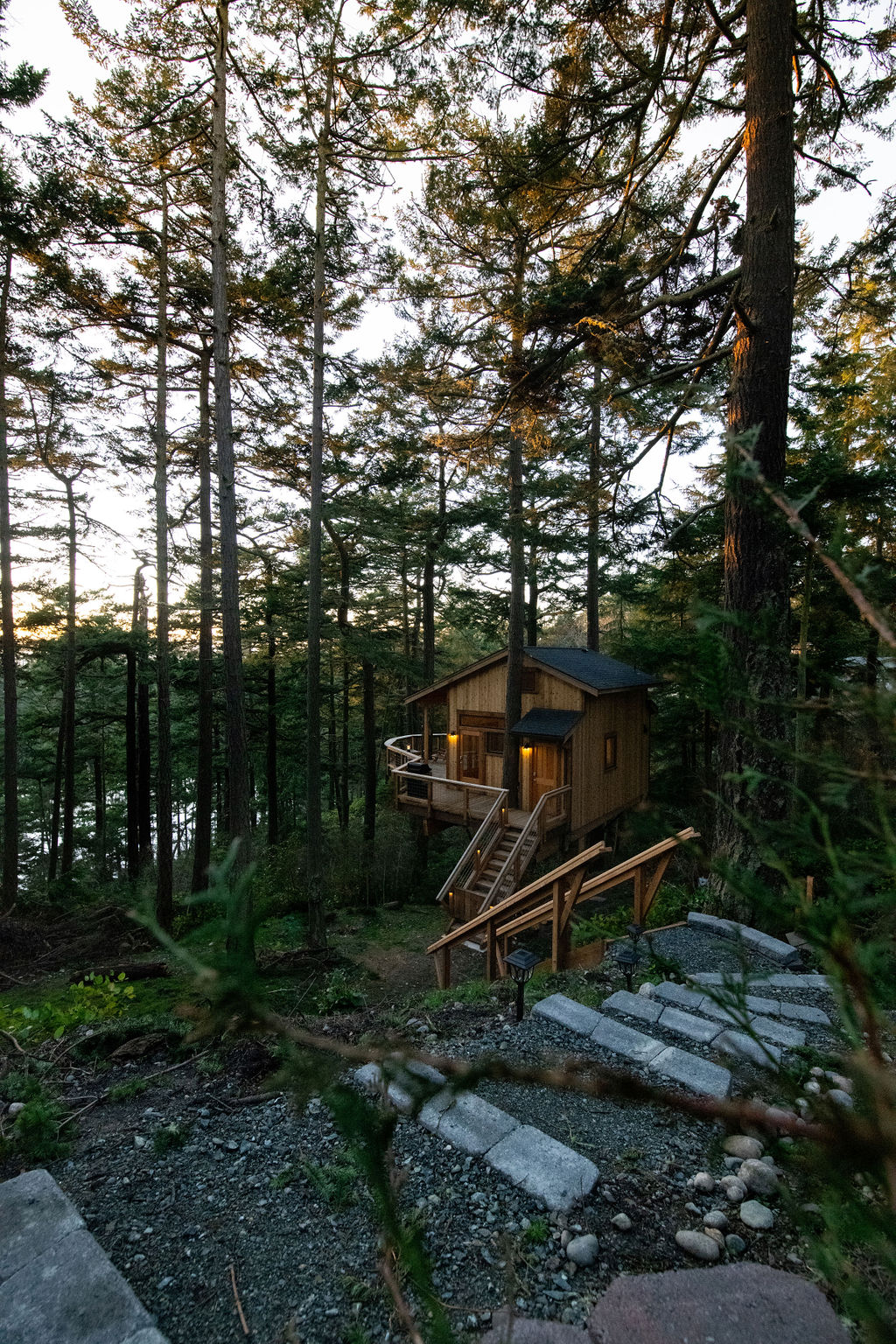 Nestled 15 feet up in a grove of burly cedars and

A little backyard oasis in Washington State. We bu

The Woods Maine Treehouse is now open for 2022 Spr

The snow is sticking around in Washington and we d