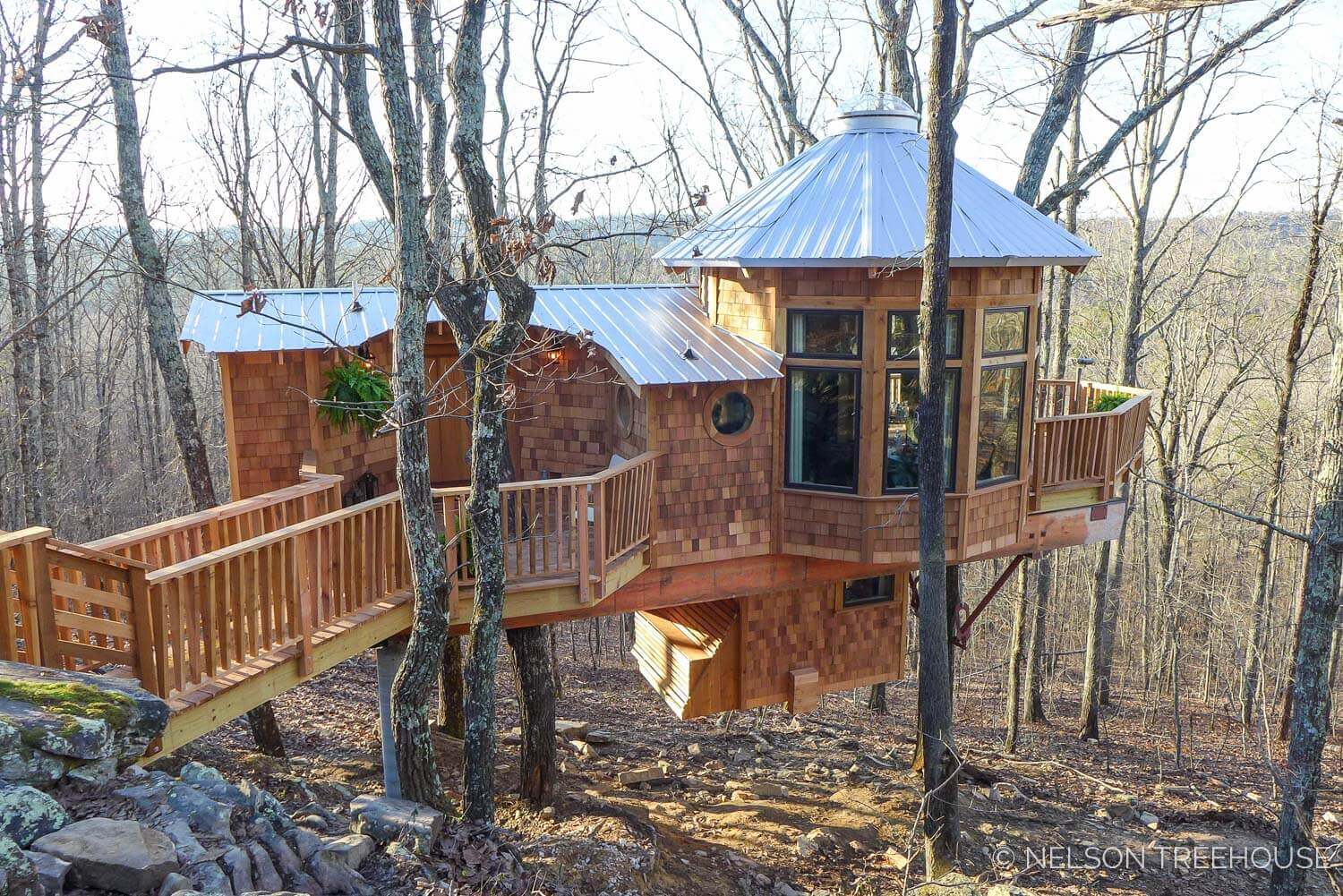 This luxe, British-themed lair would befit the likes of James Bond. Inside, its wet bar and posh living room are capped with an artful reciprocal roof. For another 007-worthy touch, a built-in bookcase hides a secret door to the sub-platform bedroom. 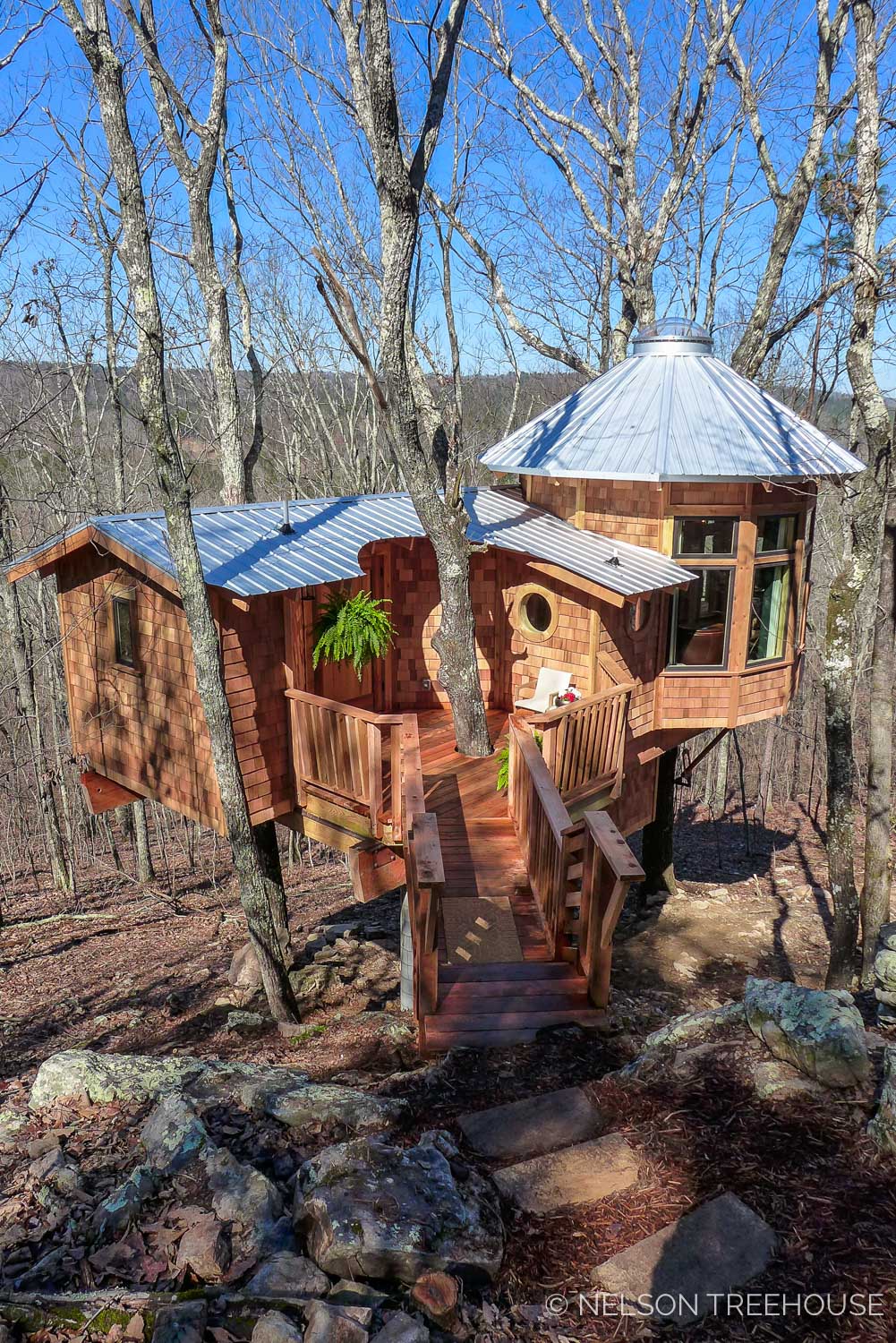 A bridge leads down to the treehouse, which is perched in a grove of chestnut oaks. 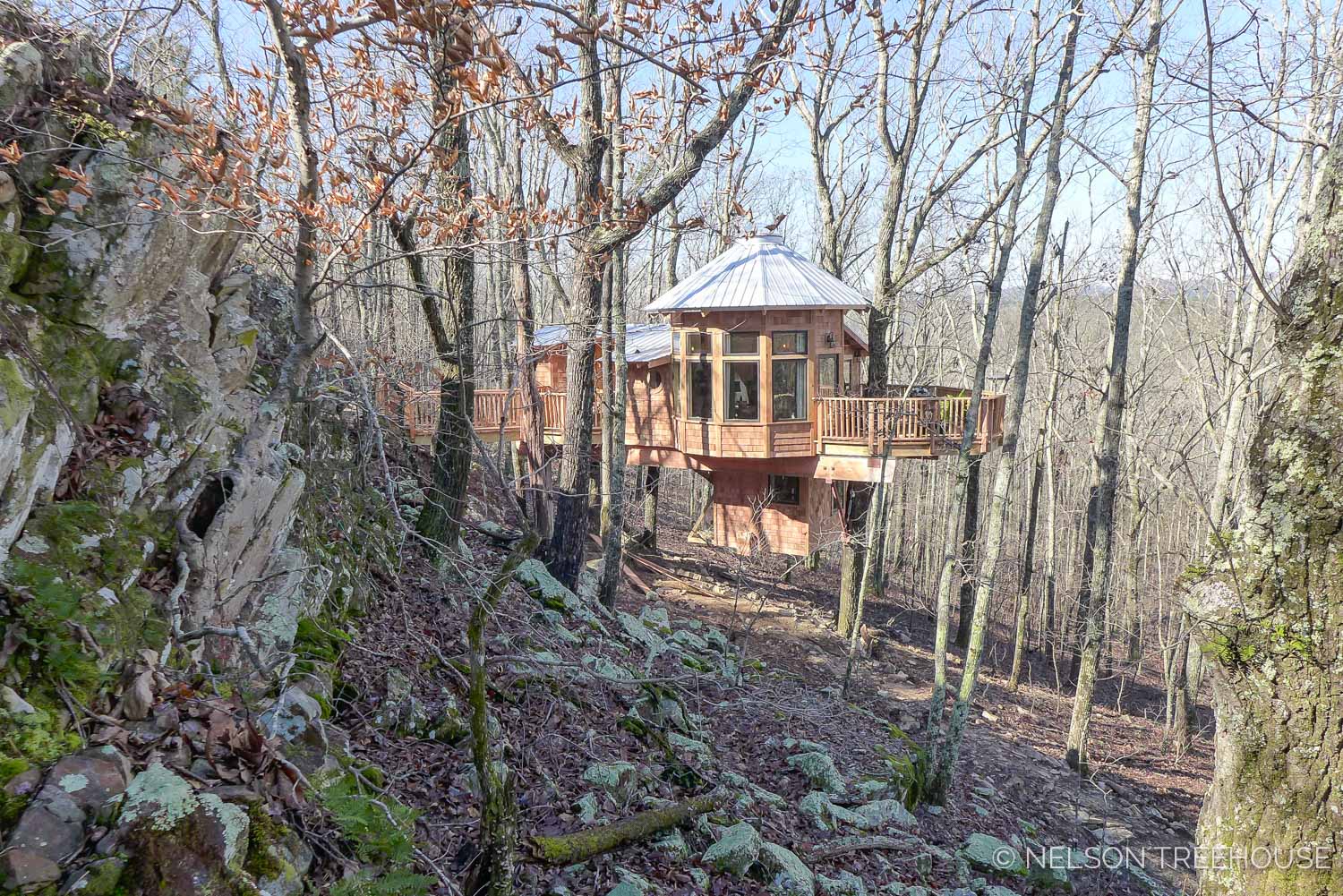 This secret lair is hidden by the adjacent rock ridge. 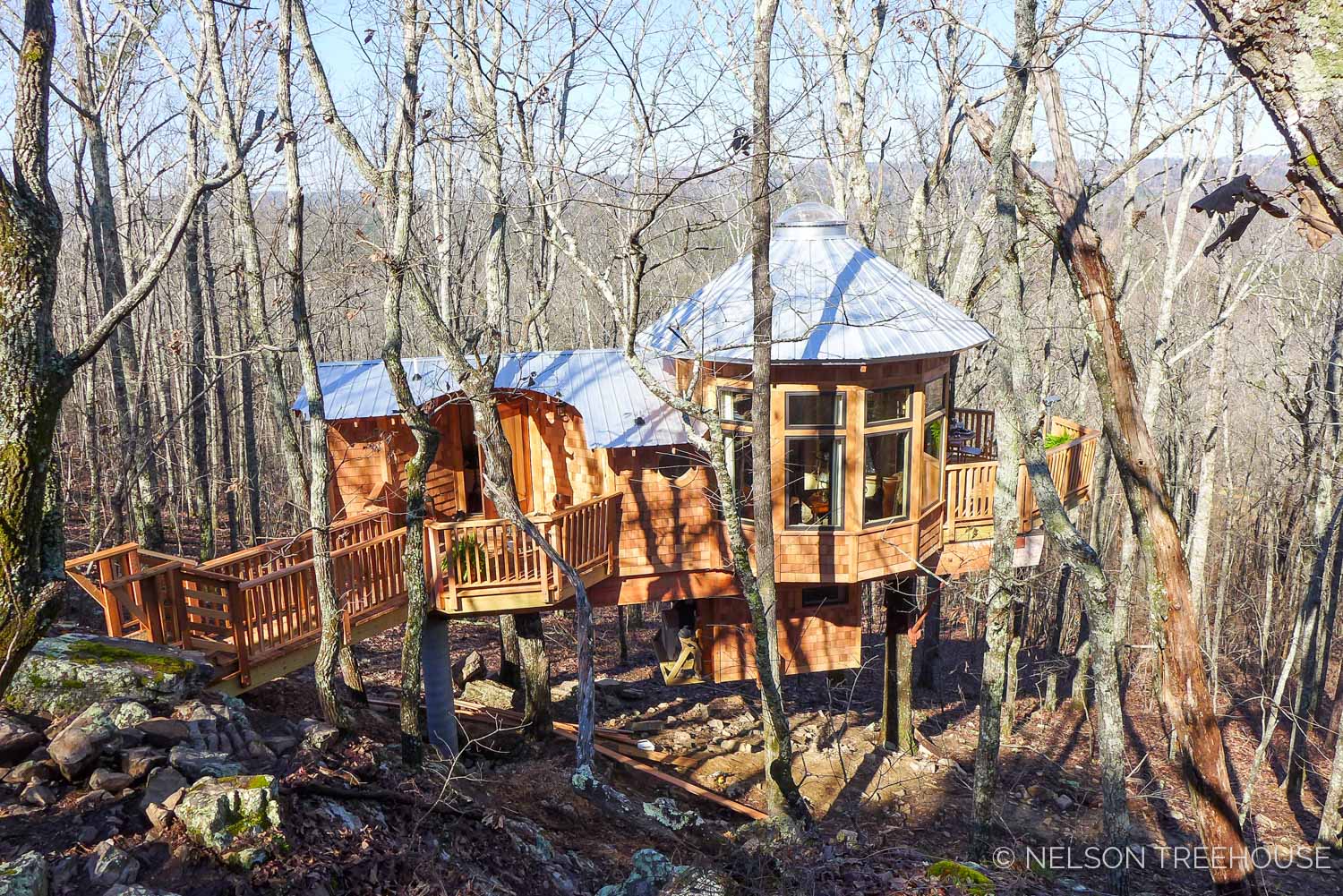 Daniel Ash, our lead architect, headed up the design on this treehouse. He was inspired by a house featured in the 1971 James Bond film, “Diamonds are Forever.” This legendary villain’s lair was designed by John Lautner and showcases circular spaces and an epic radial roof. 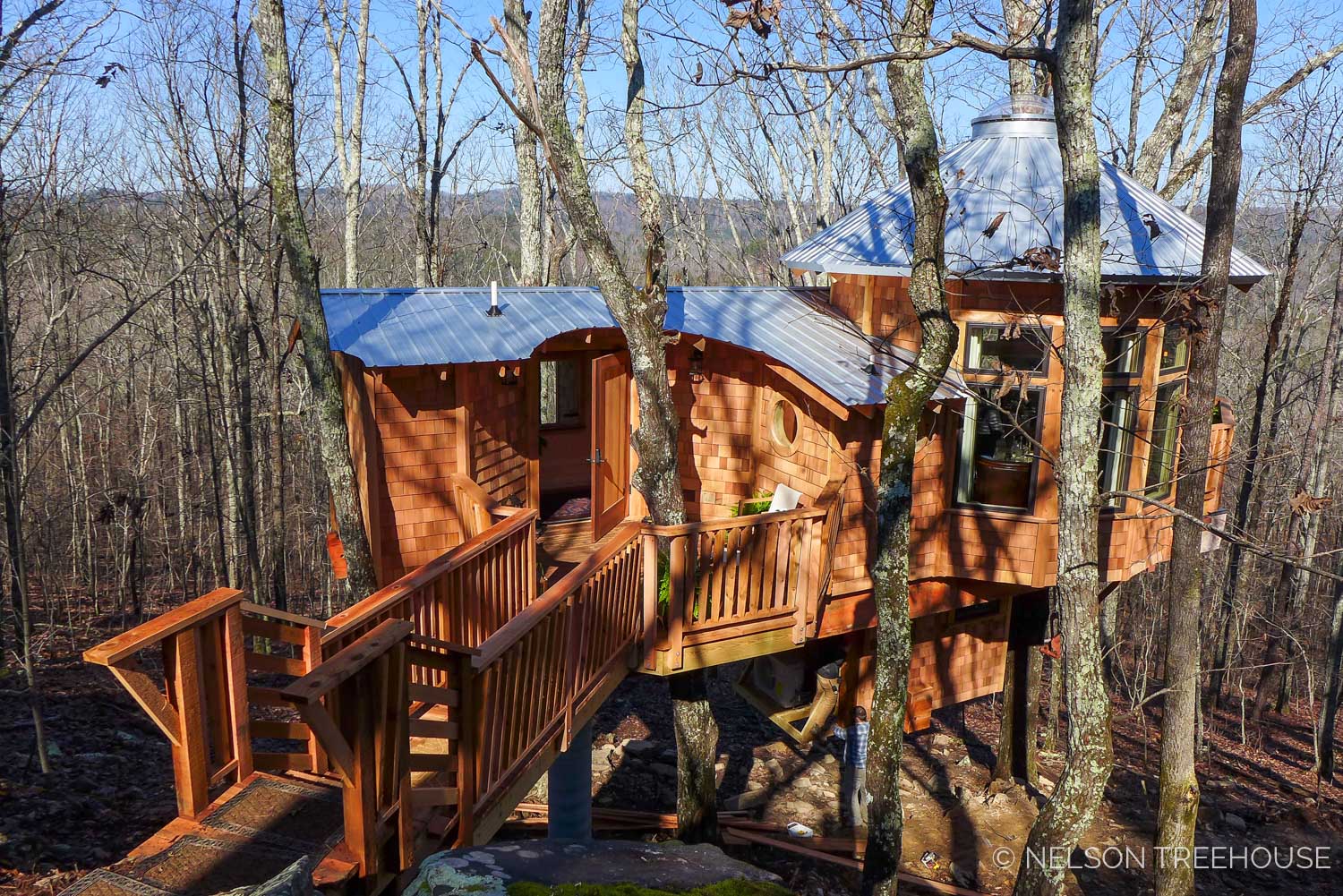 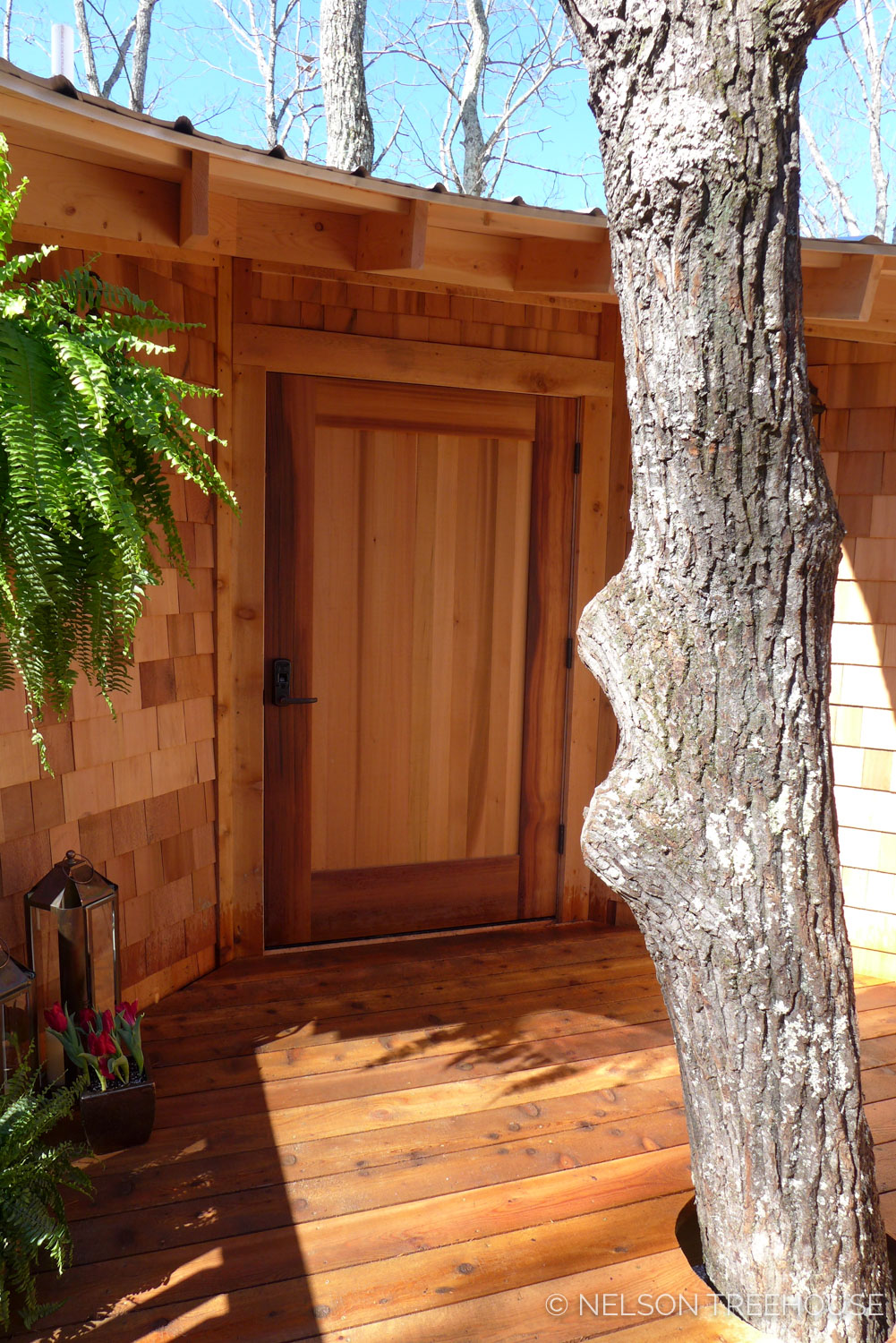 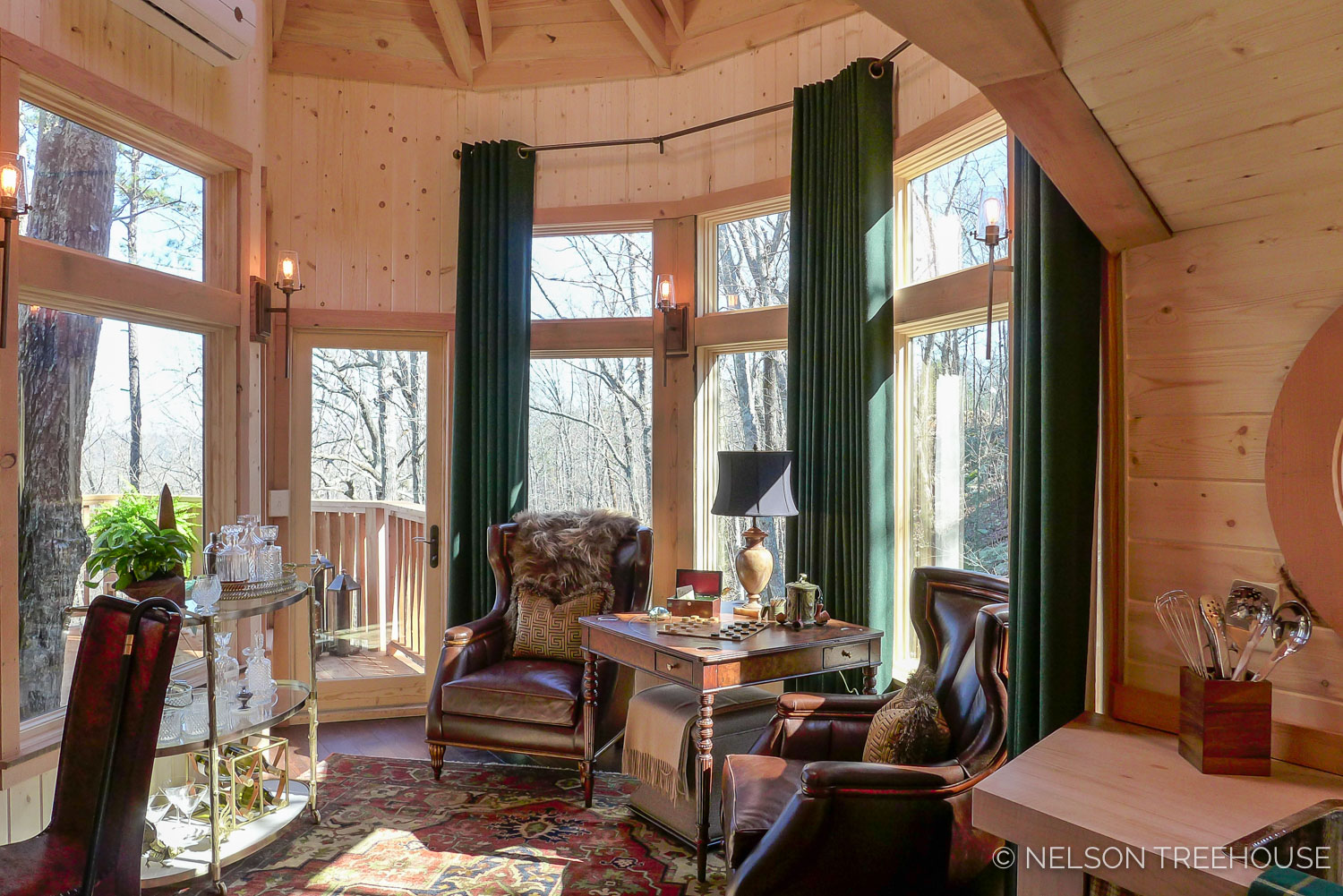 After passing through the tight entryway, the interior opens up to this grand seating room. Sunlight streams in through tall Marvin Windows, which provide sweeping views of the surrounding forest. 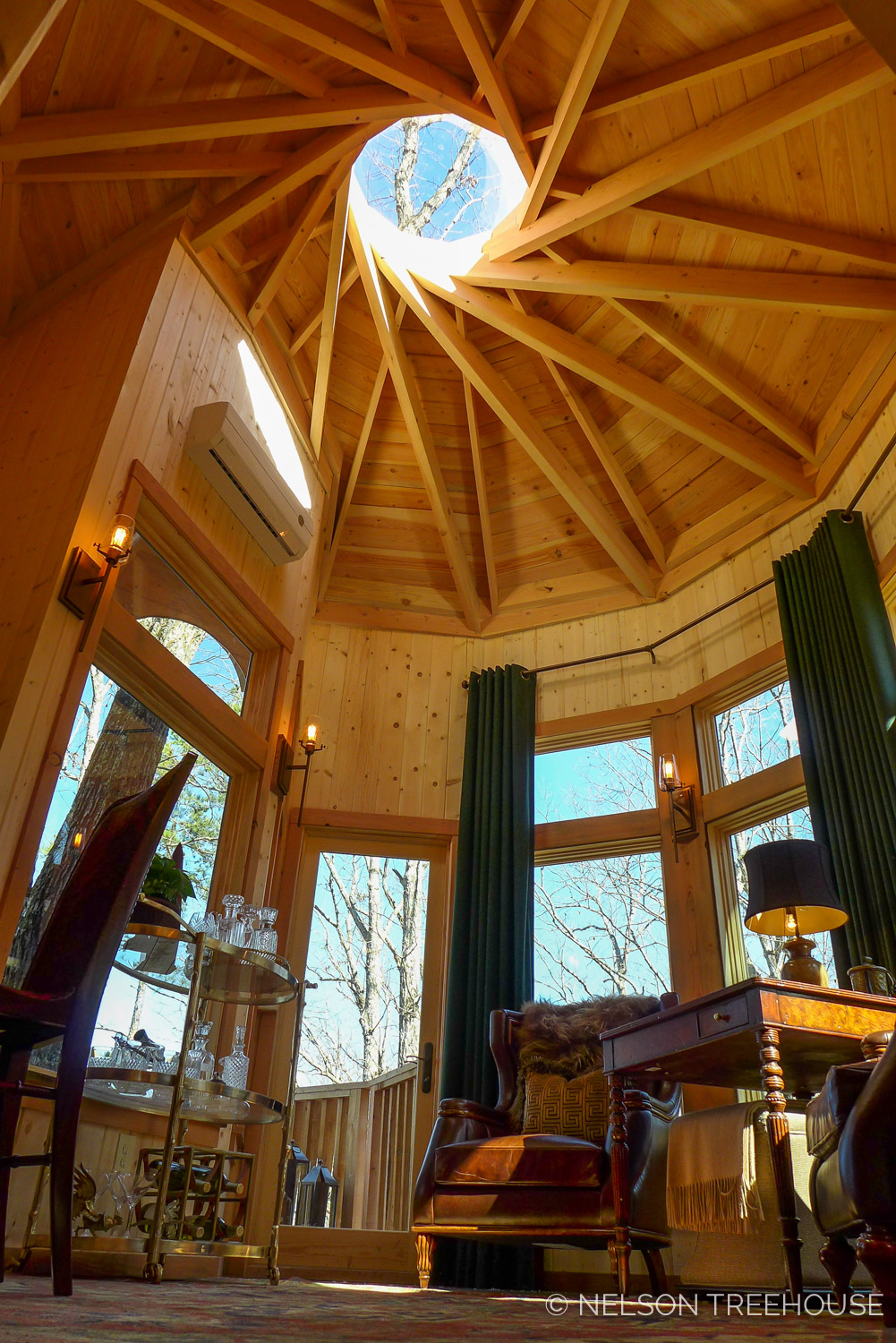 The pièce de résistance of the seating room is the reciprocal roof. This self-supporting framing technique does away with the need for a central support system and adds grandeur to the space. 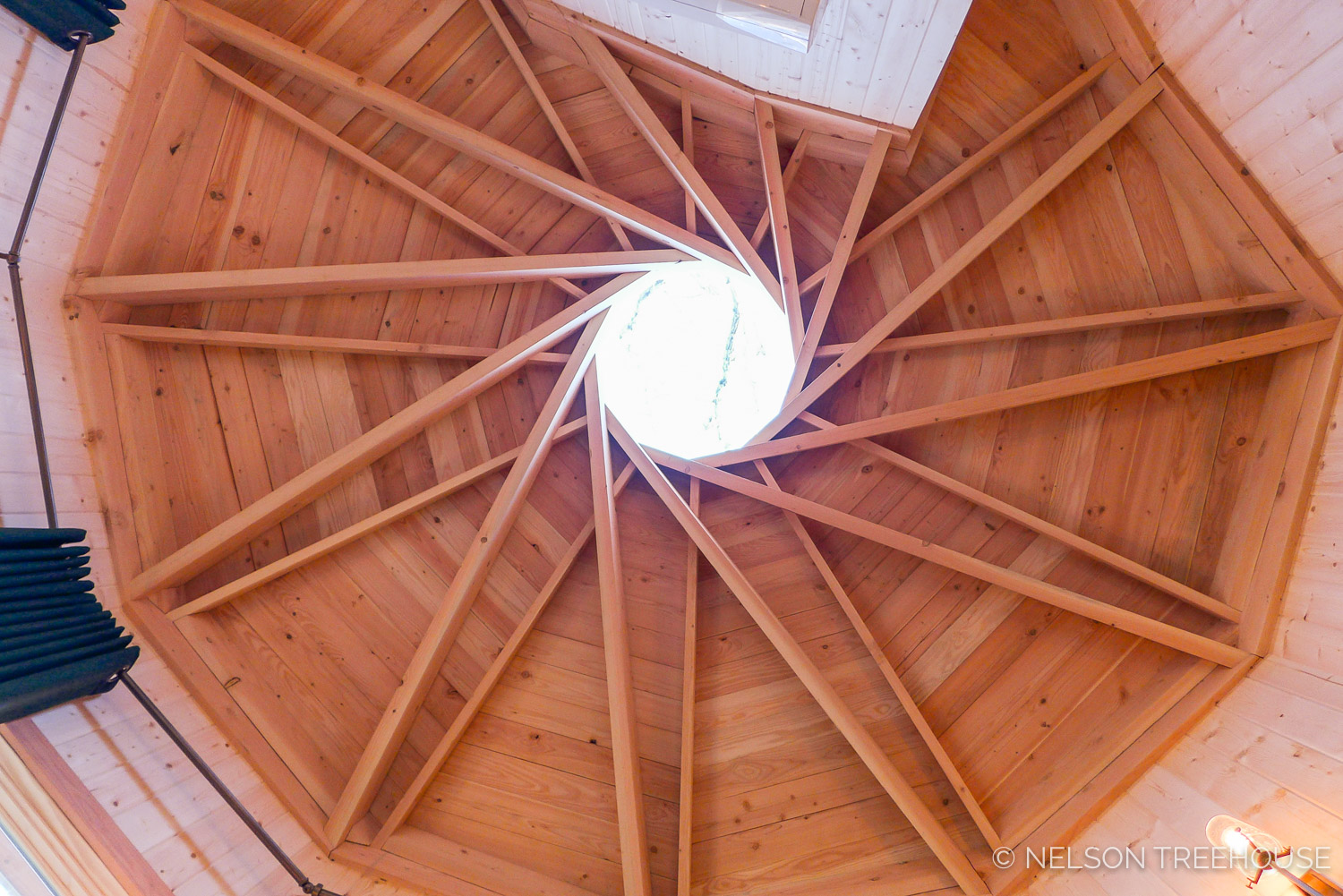 With its central oculus and radial design, the roof pays homage to the classic gun barrel sequence at the opening of James Bond films. 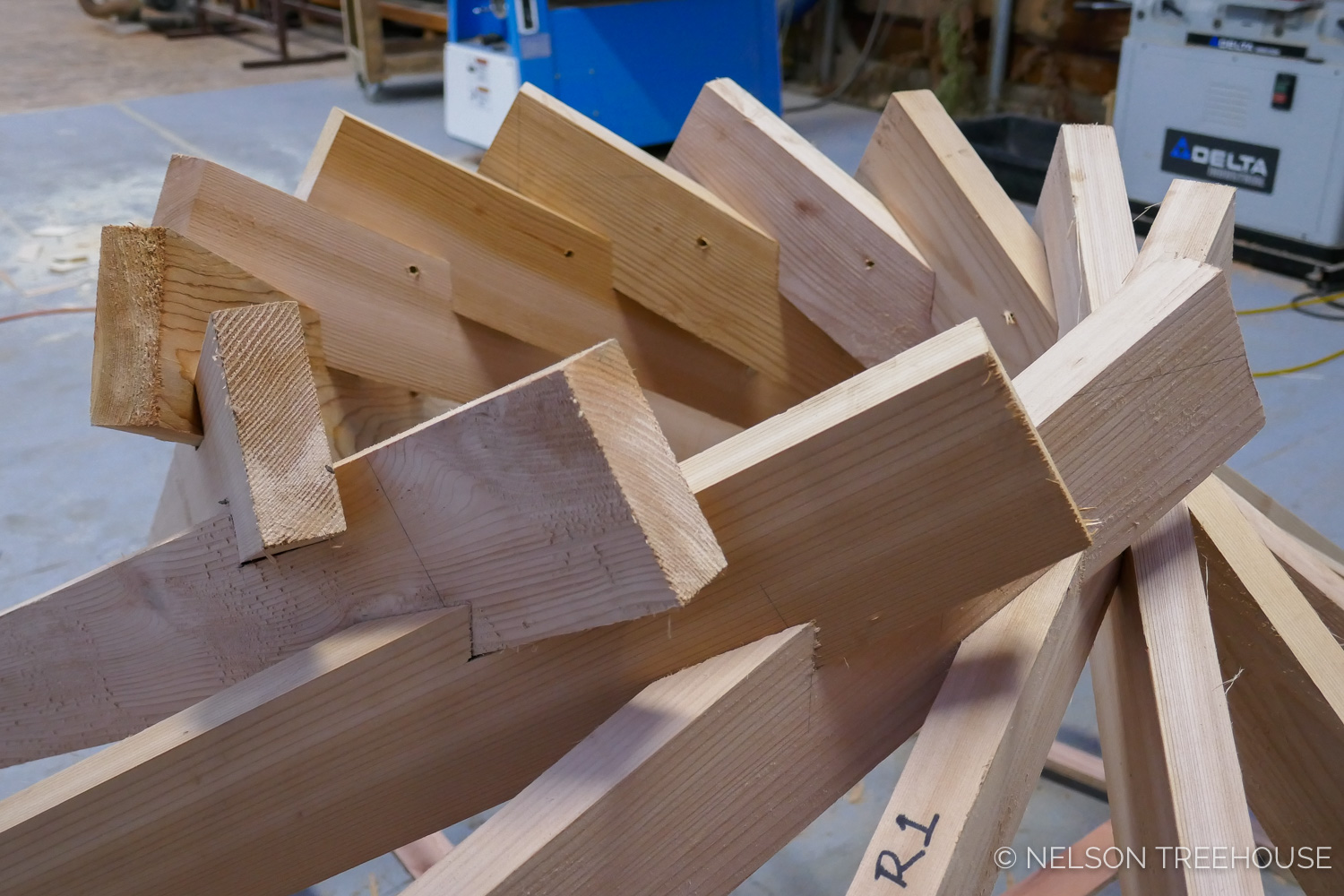 Our prefabrication crew mocked up a model of the roof before cutting and framing the real deal. 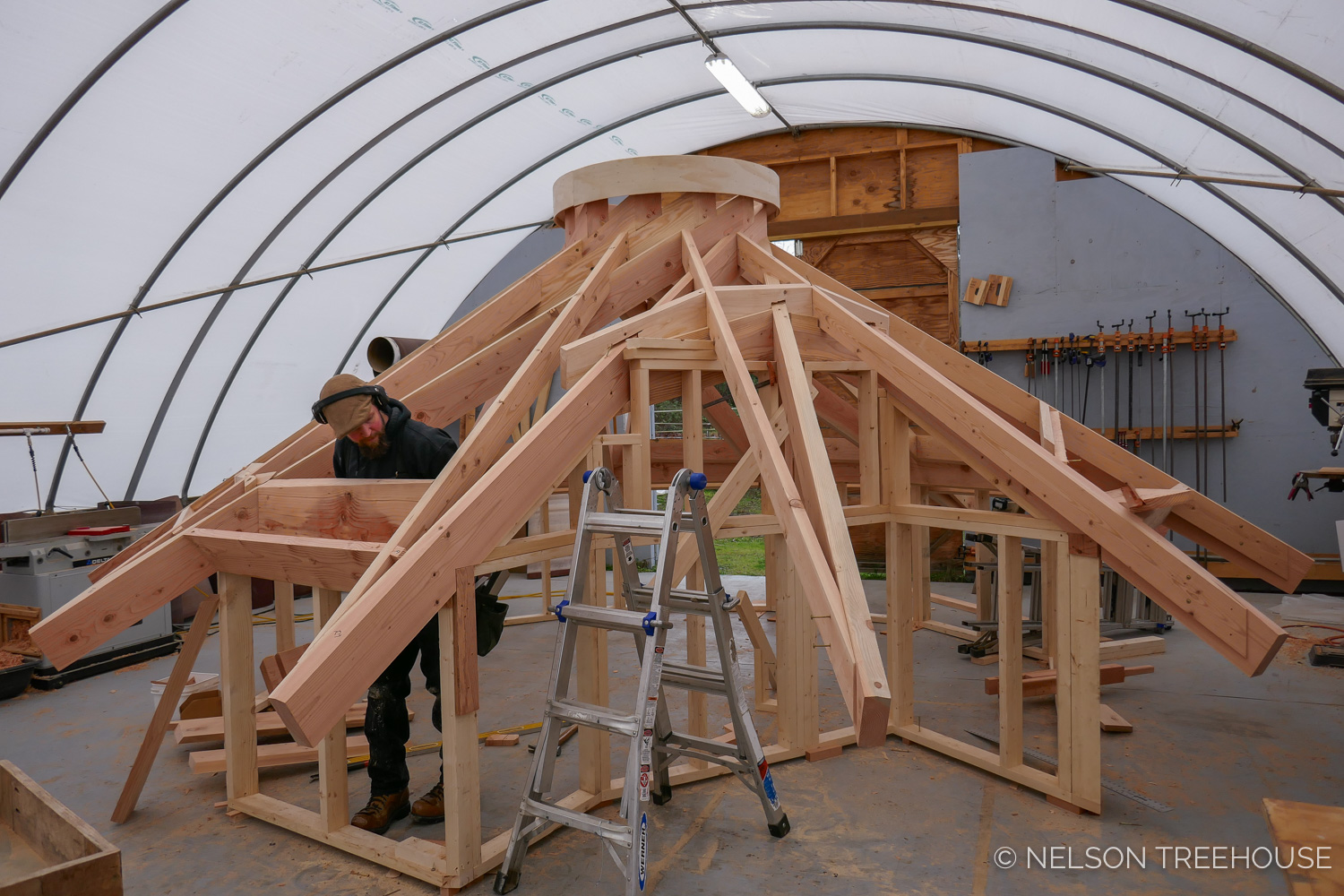 Reciprocal roofs are very tricky to craft, but have the advantage of spanning large spaces with short structural members. 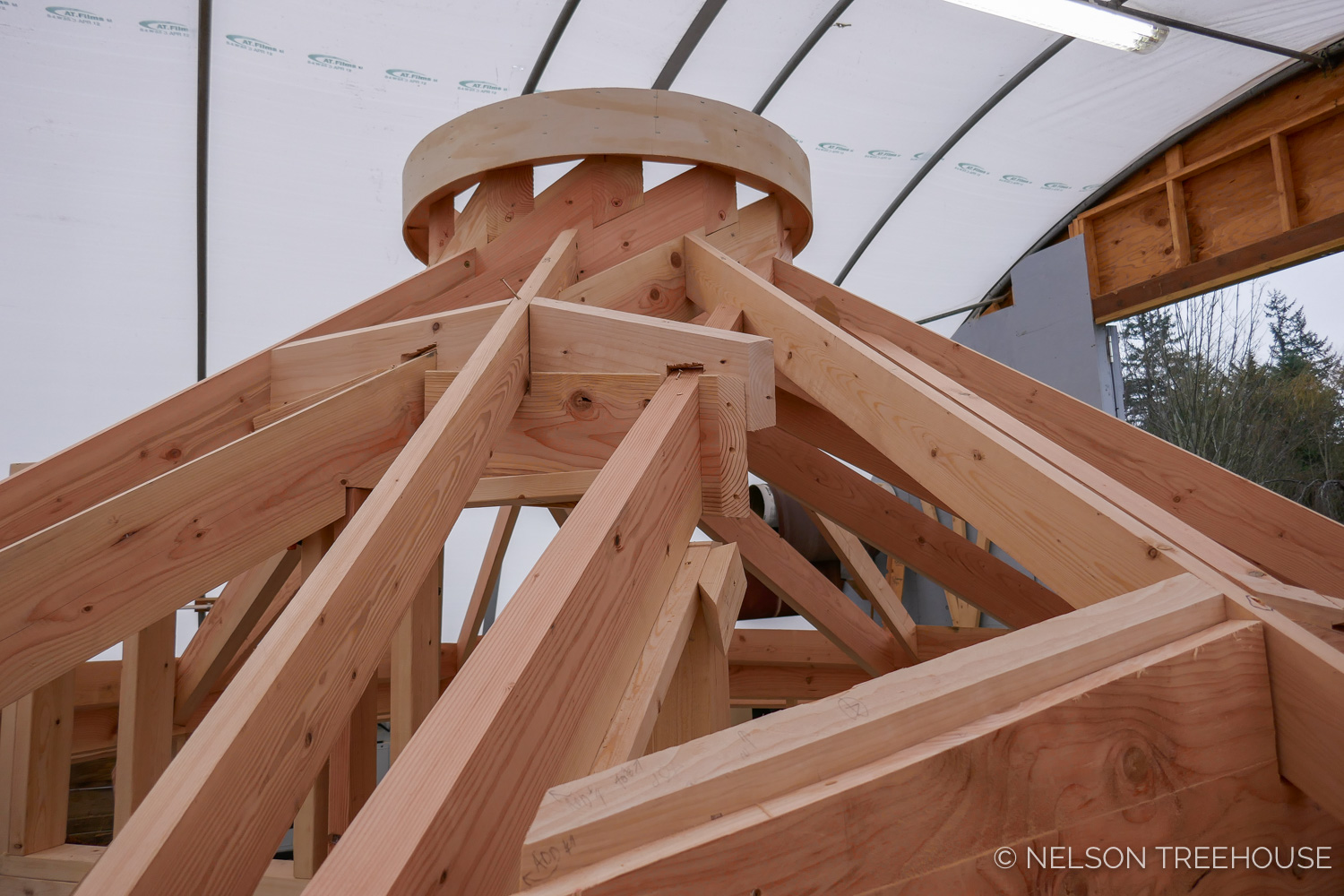 The crew made sure all the components fit perfectly together in our prefab shop before dissembling and shipping it to site. 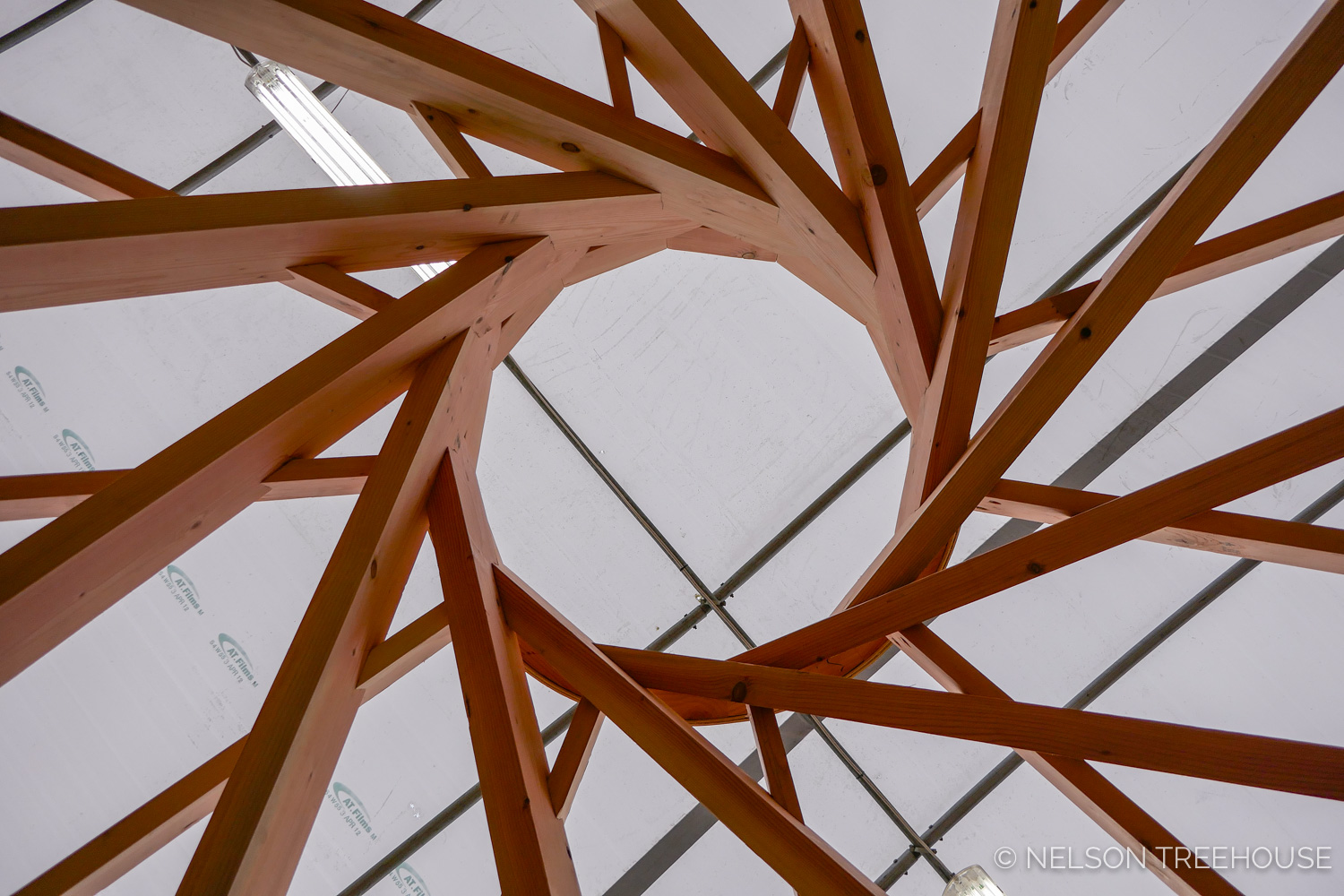 As an added challenge, the crew had to keep the center open for the oculus window. 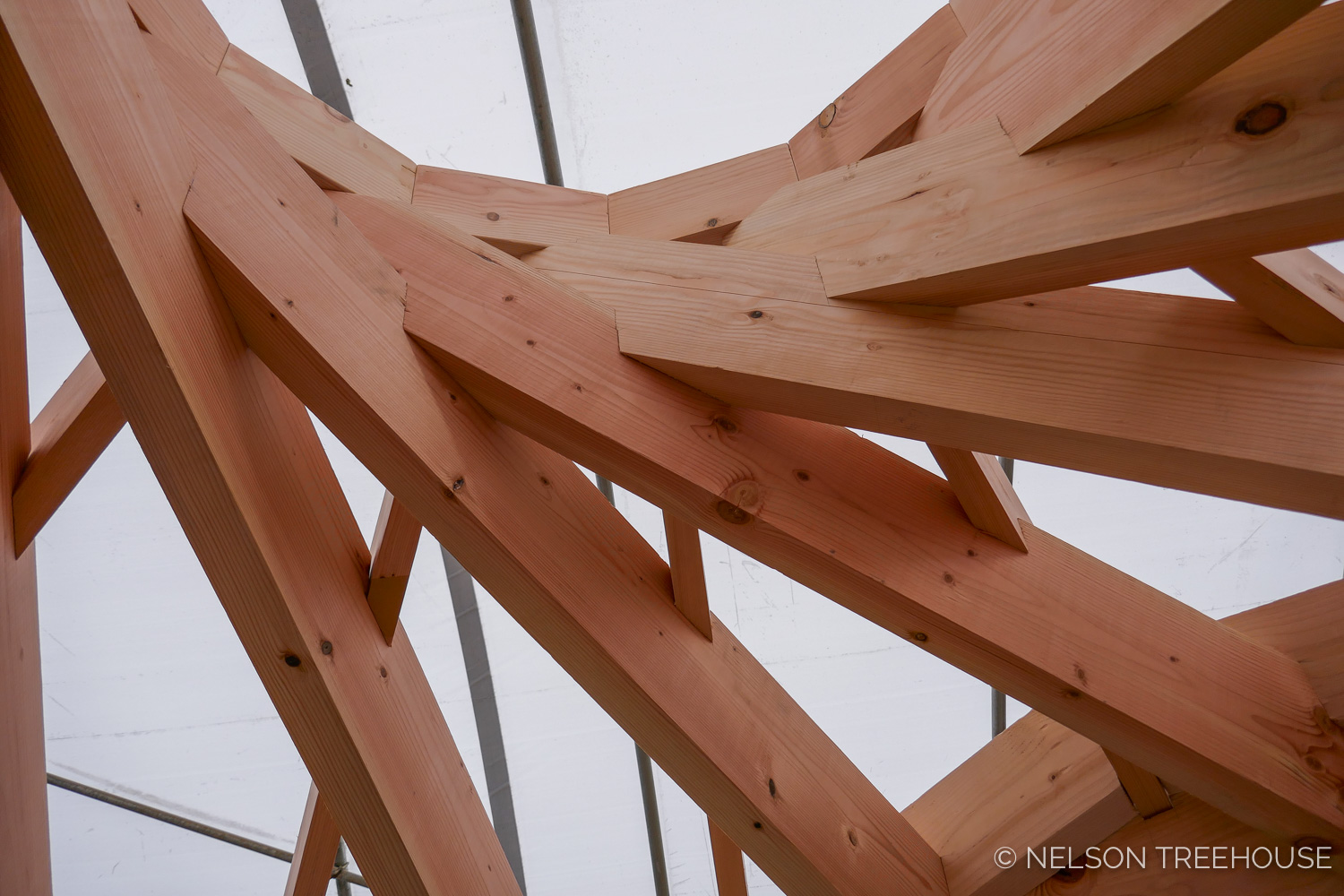 If you’ve created a reciprocal roof, let us know in the comments below! We loved trying our hand at this beautiful technique. 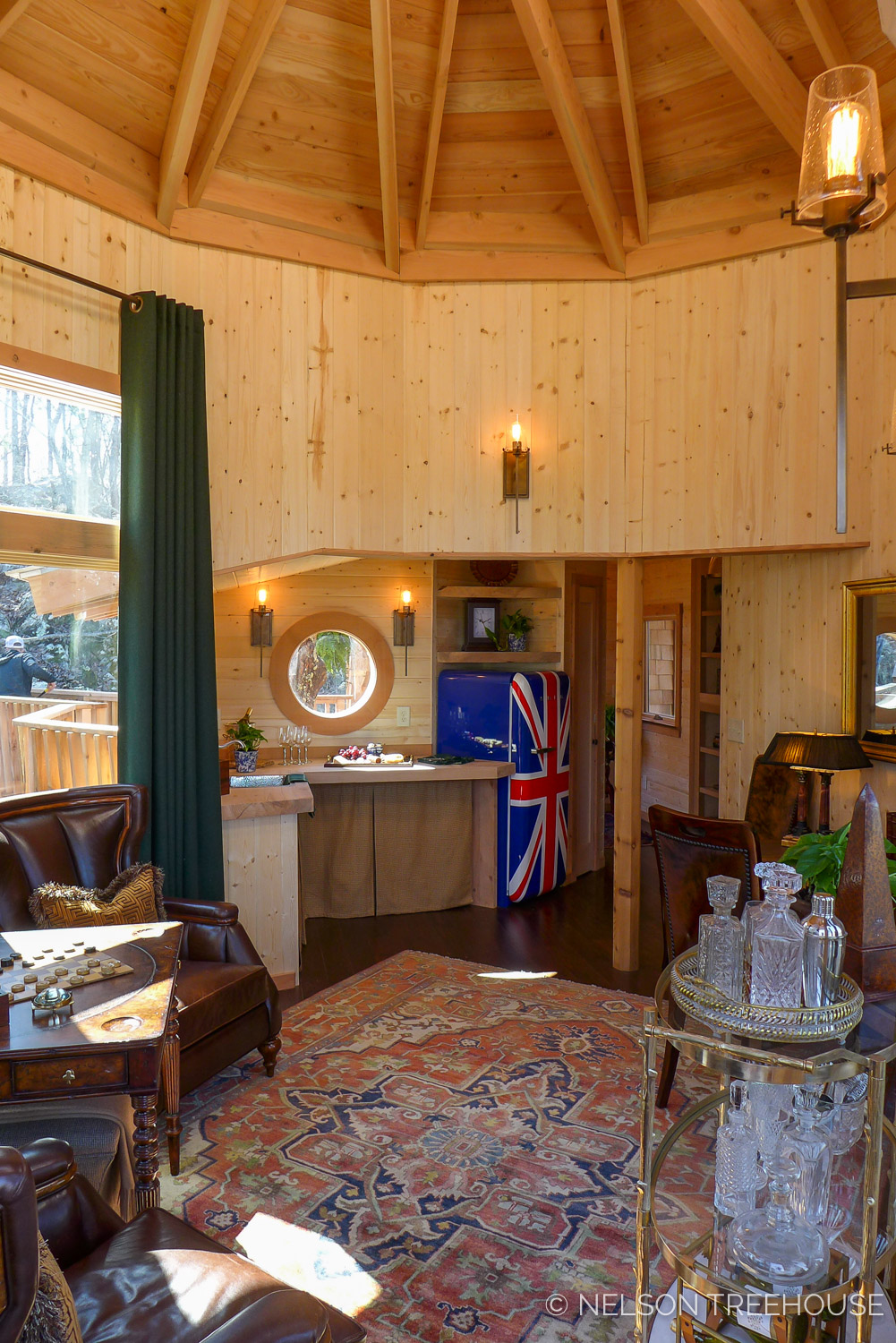 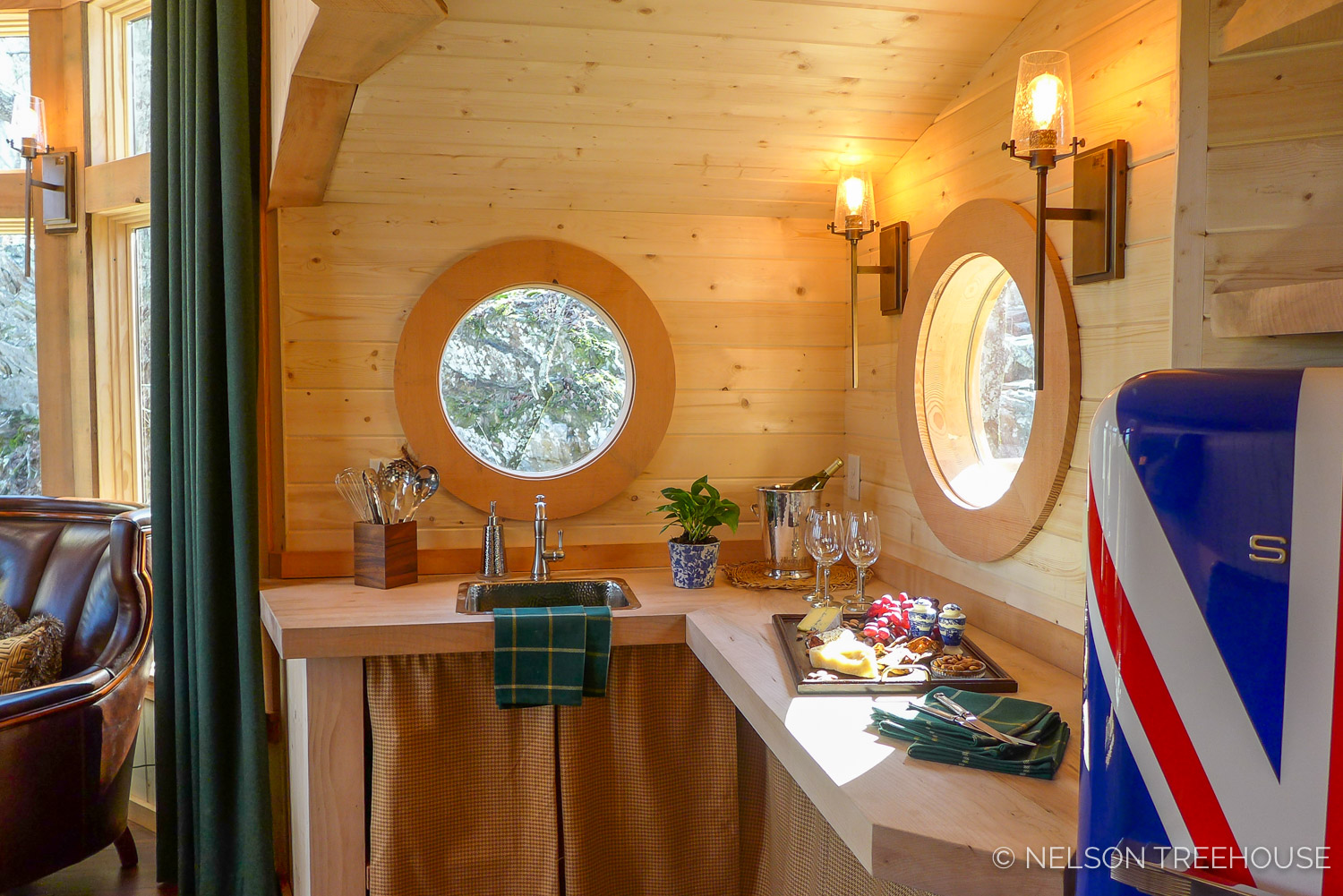 The wet bar adjacent to the seating room is bordered by custom circular windows, also crafted by the marvelous Ian Franks. 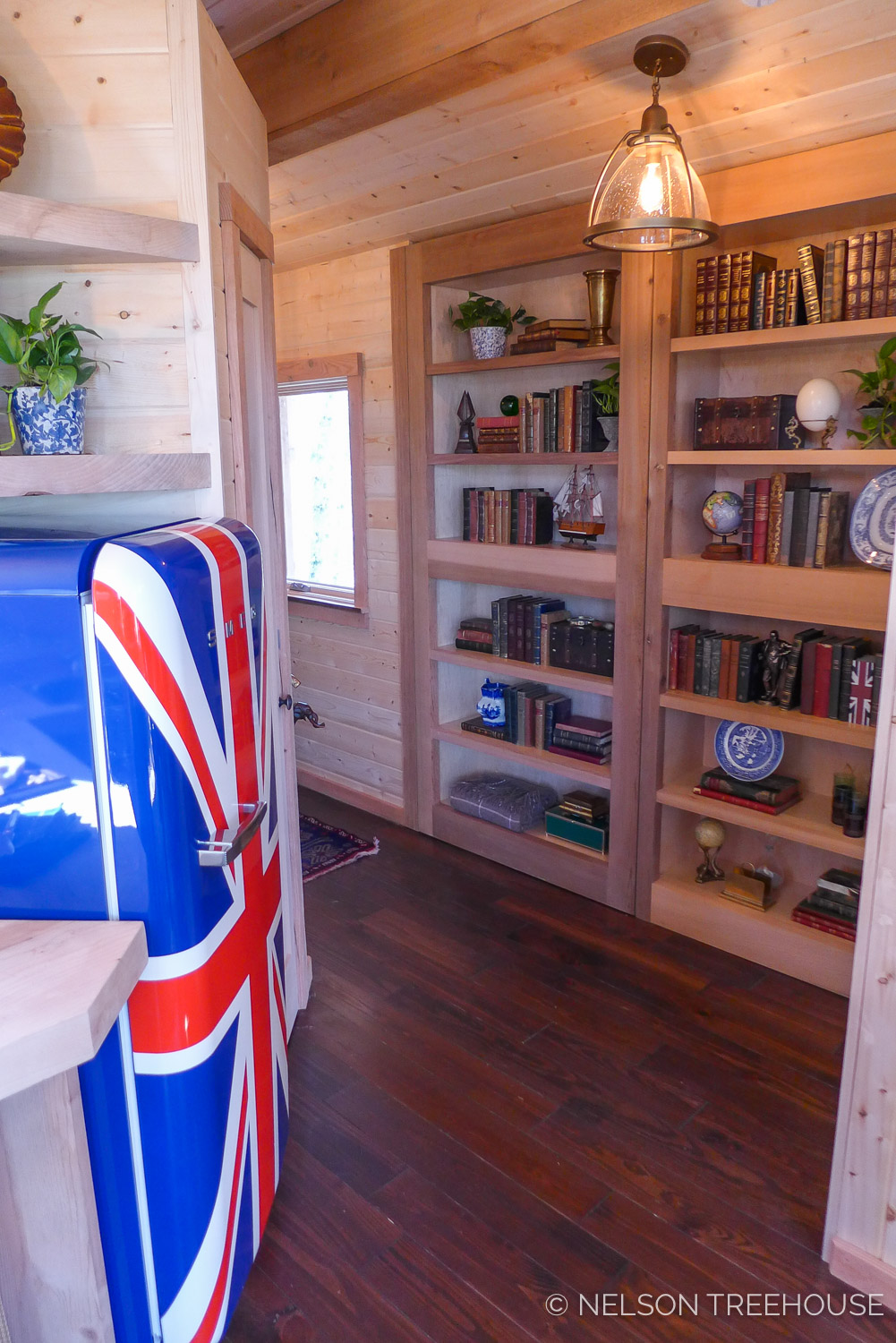 A brazenly British Smeg fridge and built-in bookcases round out the space. 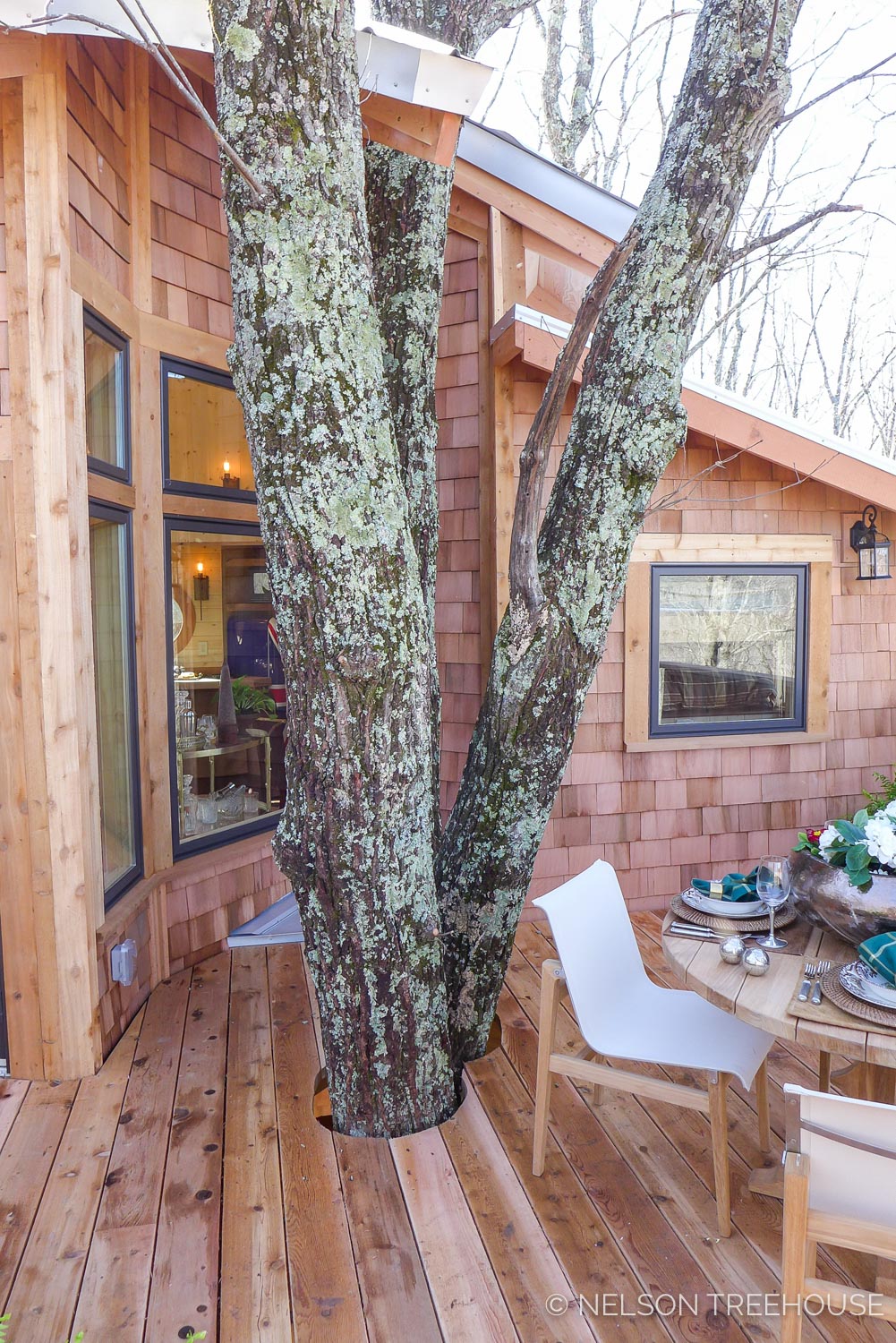 A couple oaks rocket through the curved deck at the back of the treehouse. 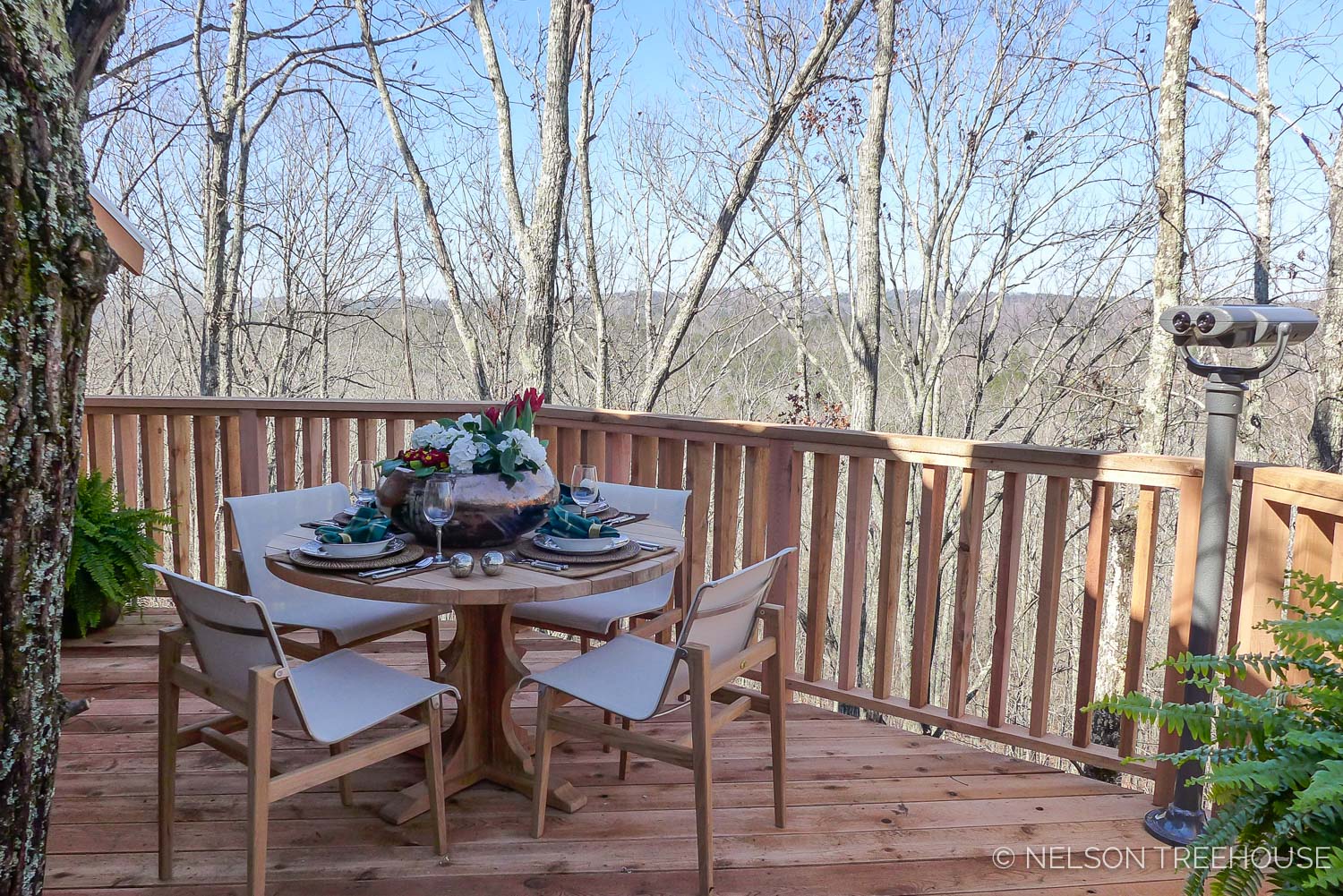 The deck is the perfect vantage point to soak in the forest—or keep a lookout for secret agents. 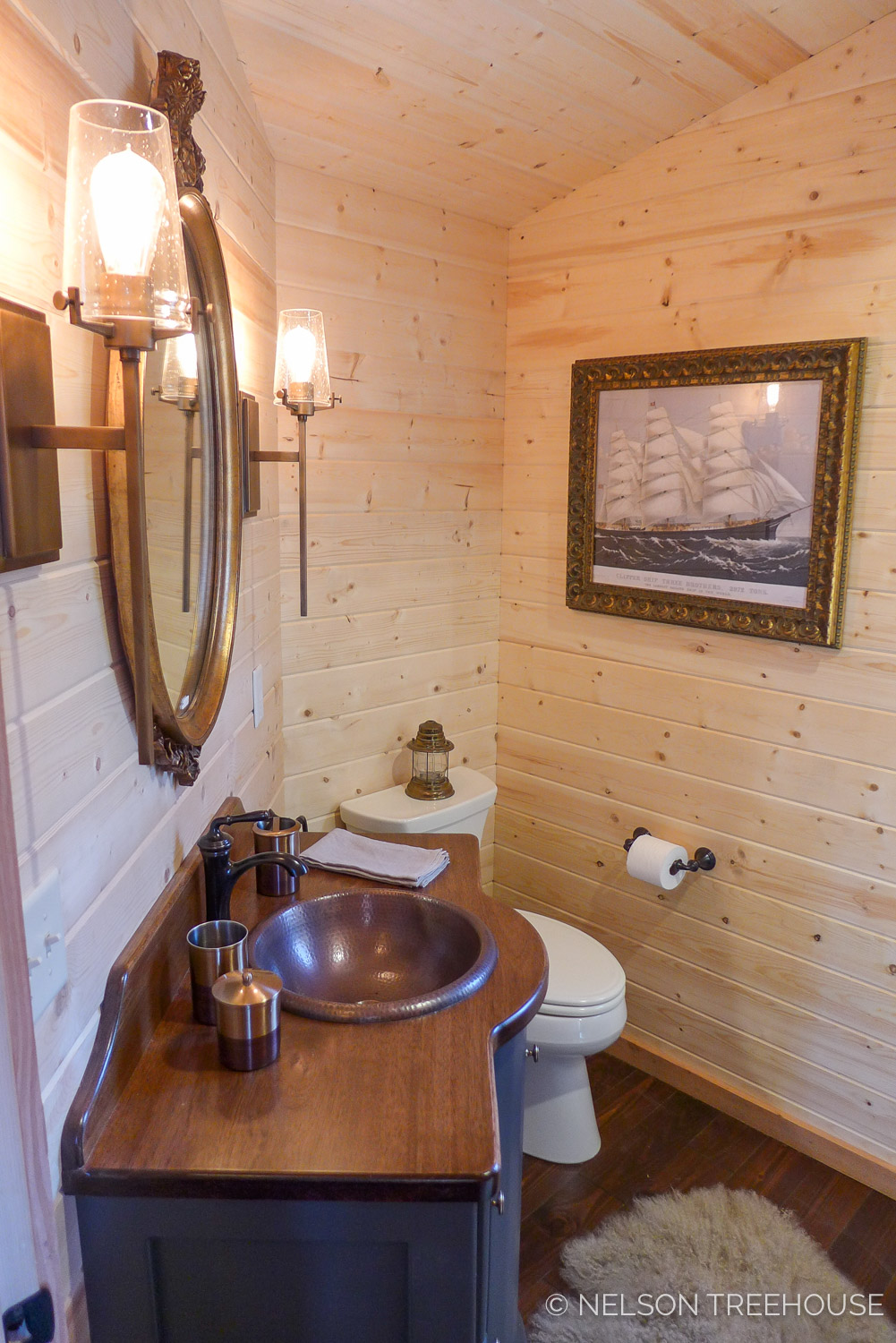 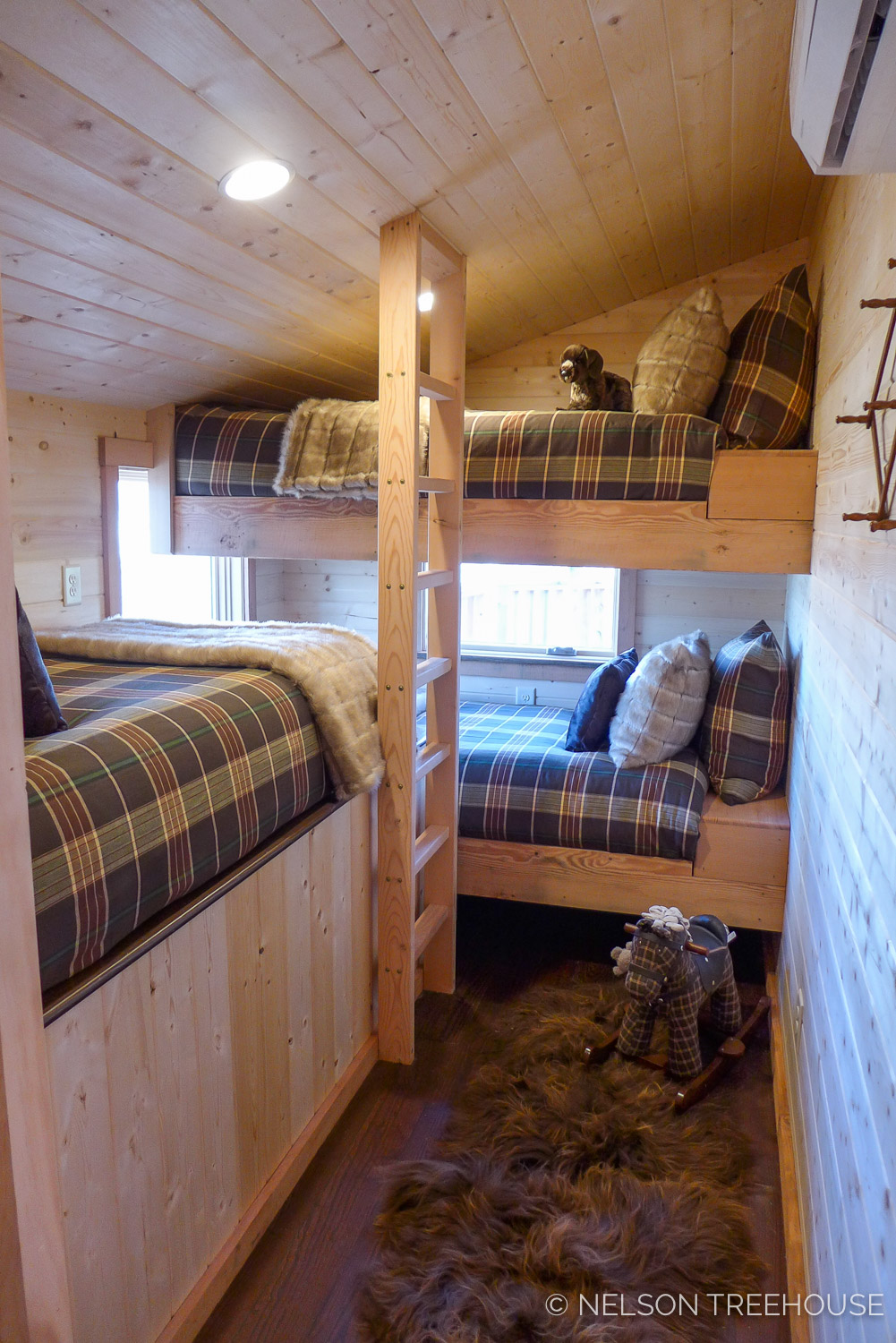 Back inside, a plumbed bathroom and cozy bunk room make the treehouse guest-friendly. 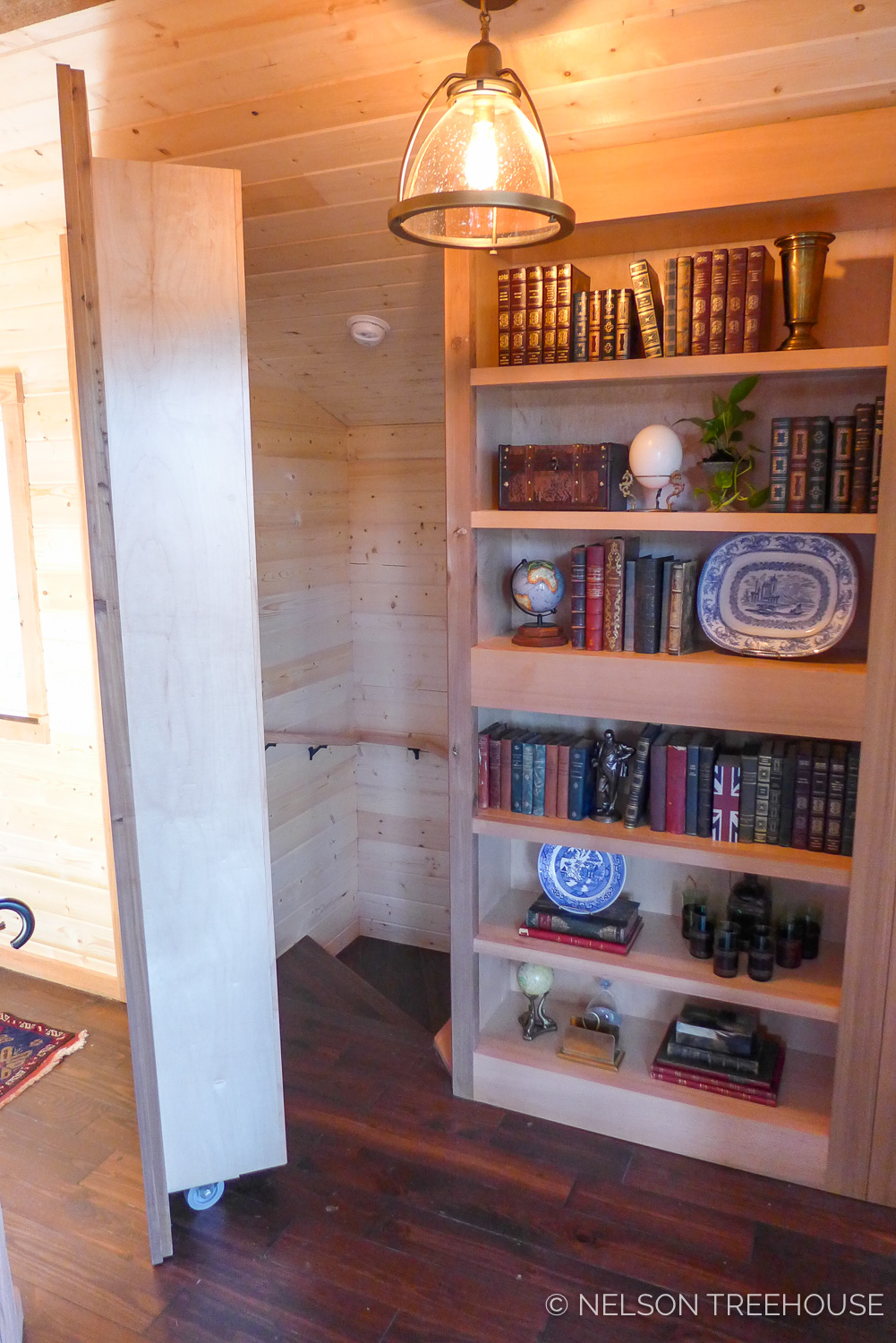 What’s a spy-themed treehouse without a hidden passageway nestled behind bookcases?! 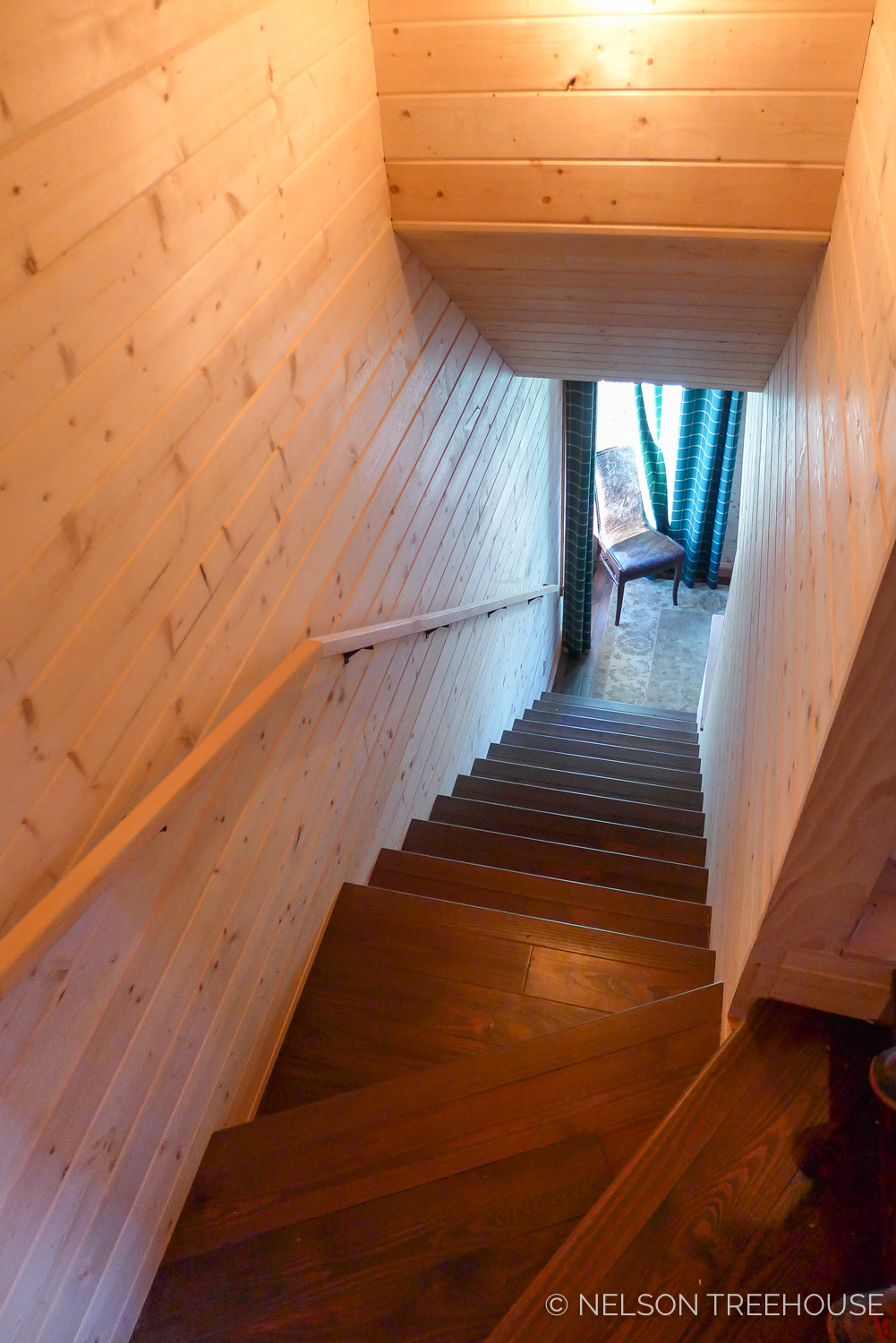 The flooring is stained reclaimed lumber and the wall paneling is pine. 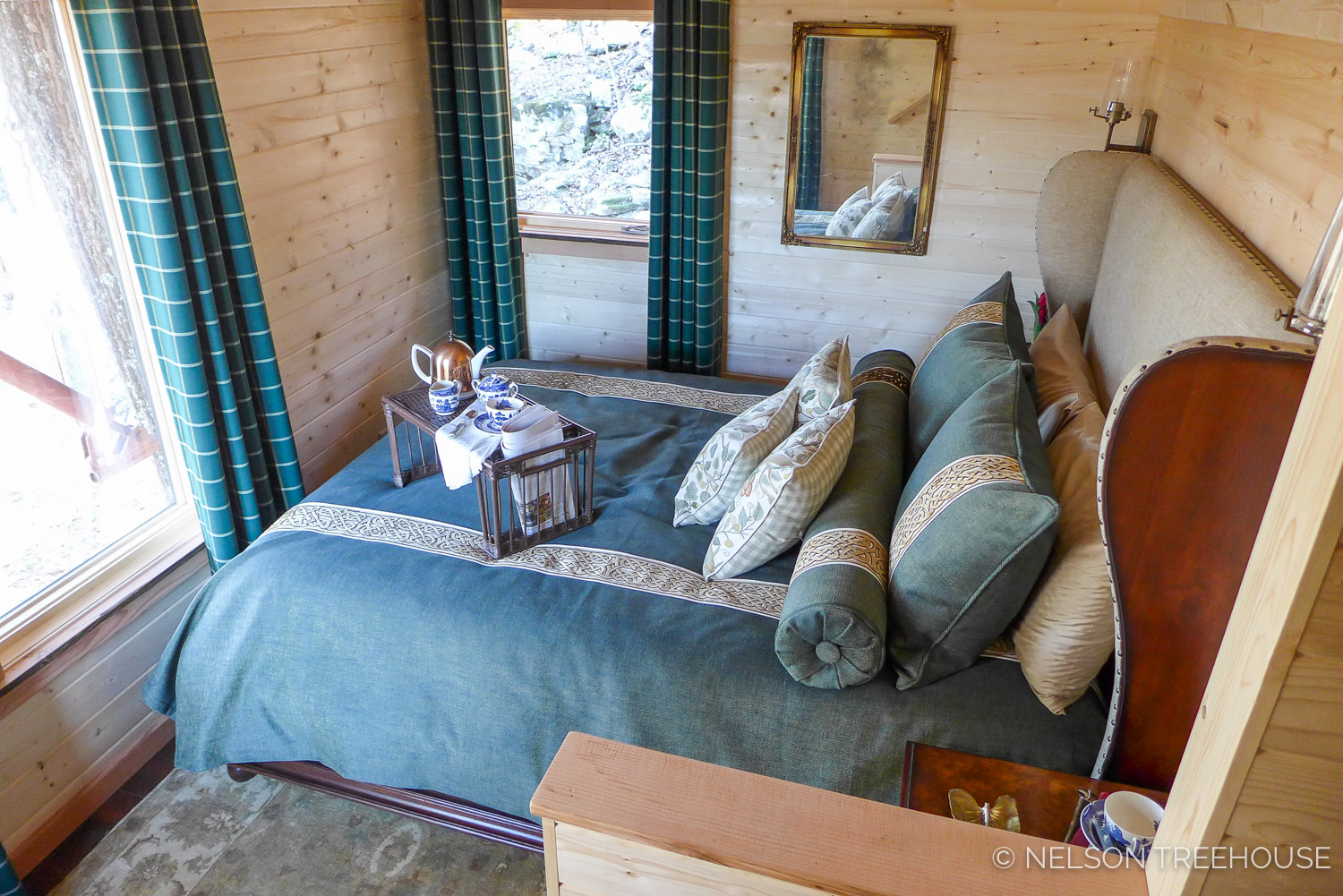 The sub-platform bedroom is also hidden from the outside: the position of the treehouse entry blocks views of it. It’s the ideal secret snooze space! 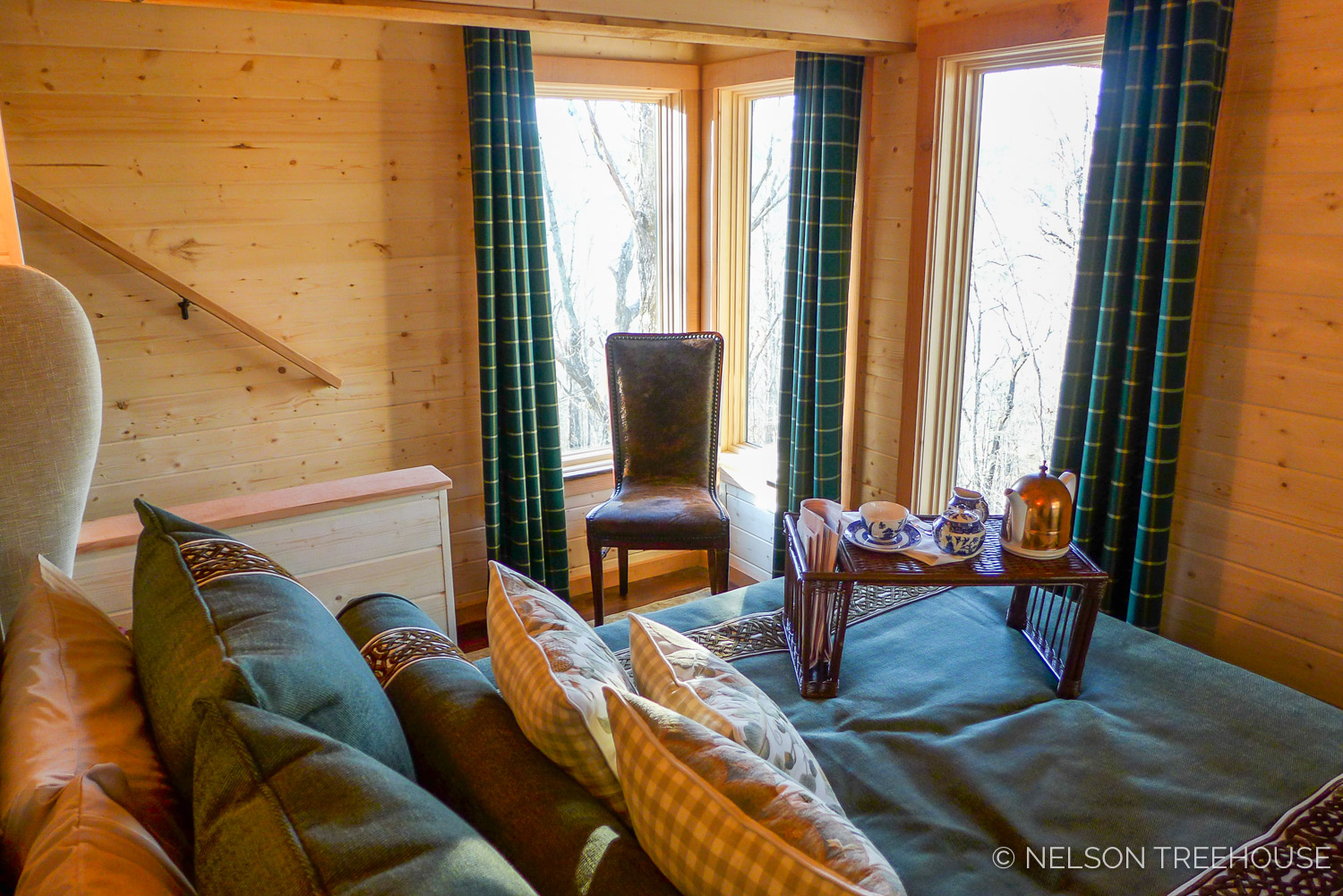 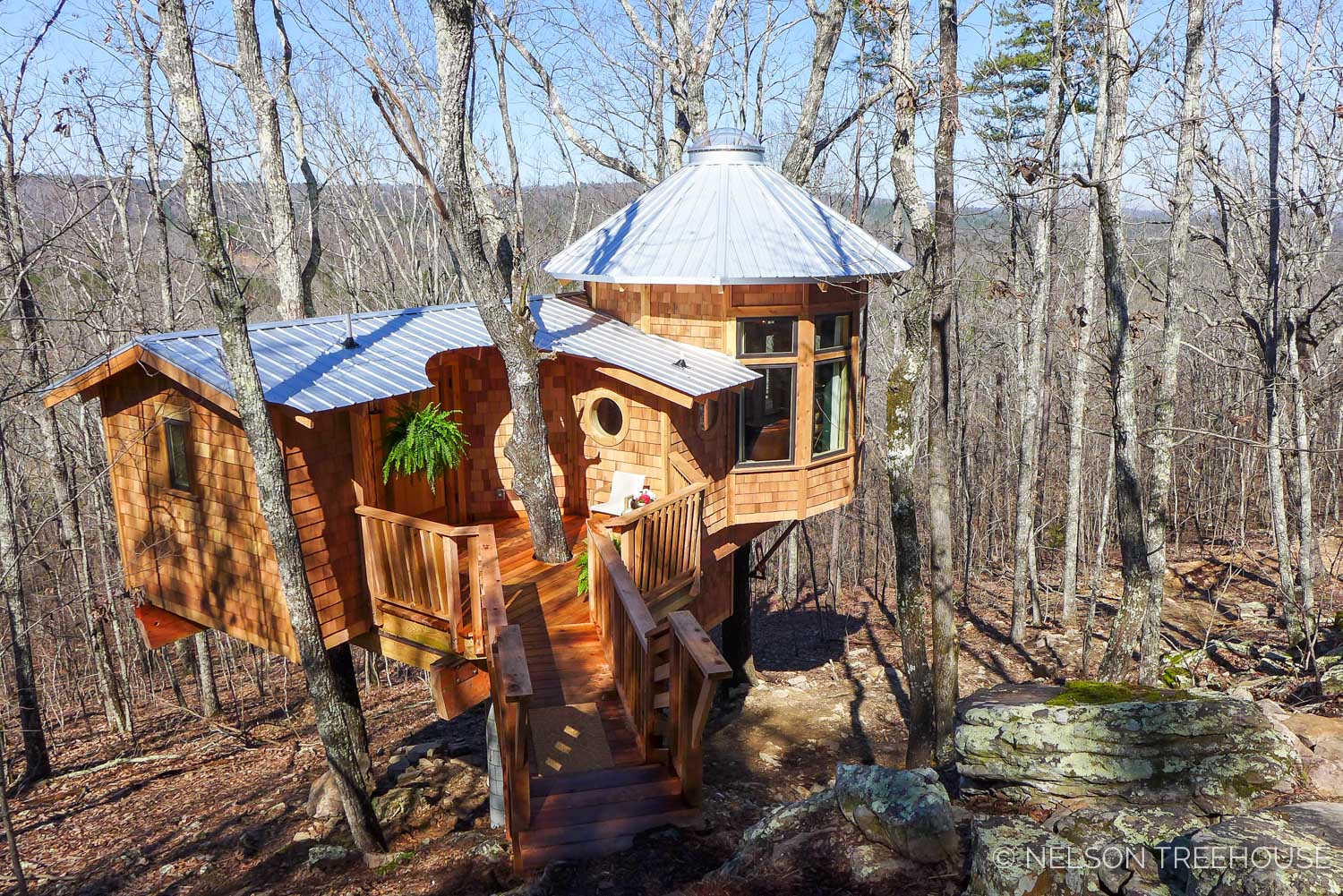 The floor plan is centered on two circles: the first wraps around the tree at the entry porch and the second is topped with the reciprocal roof. 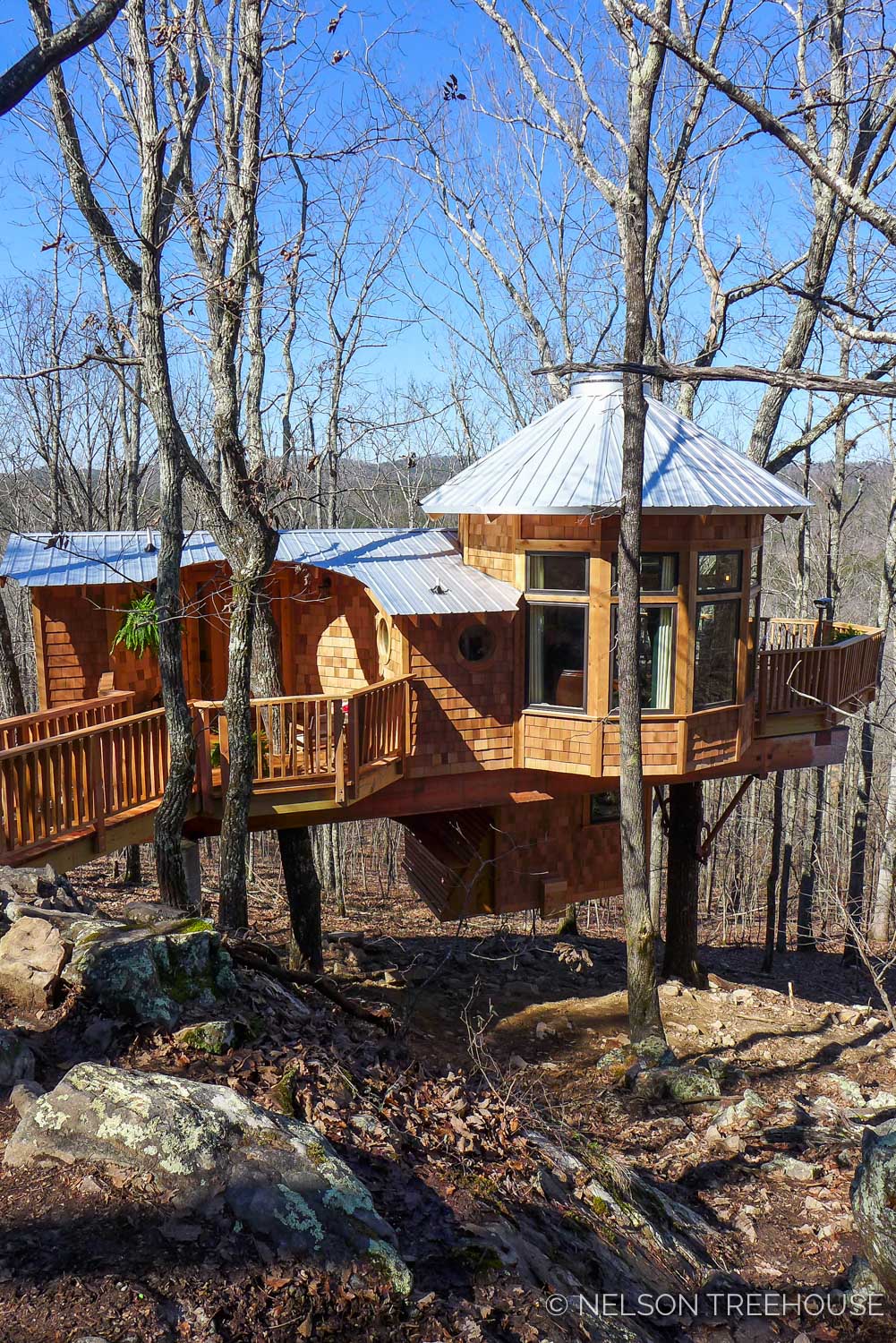 At its highest point from the ground, the treehouse platform rises 17 feet. 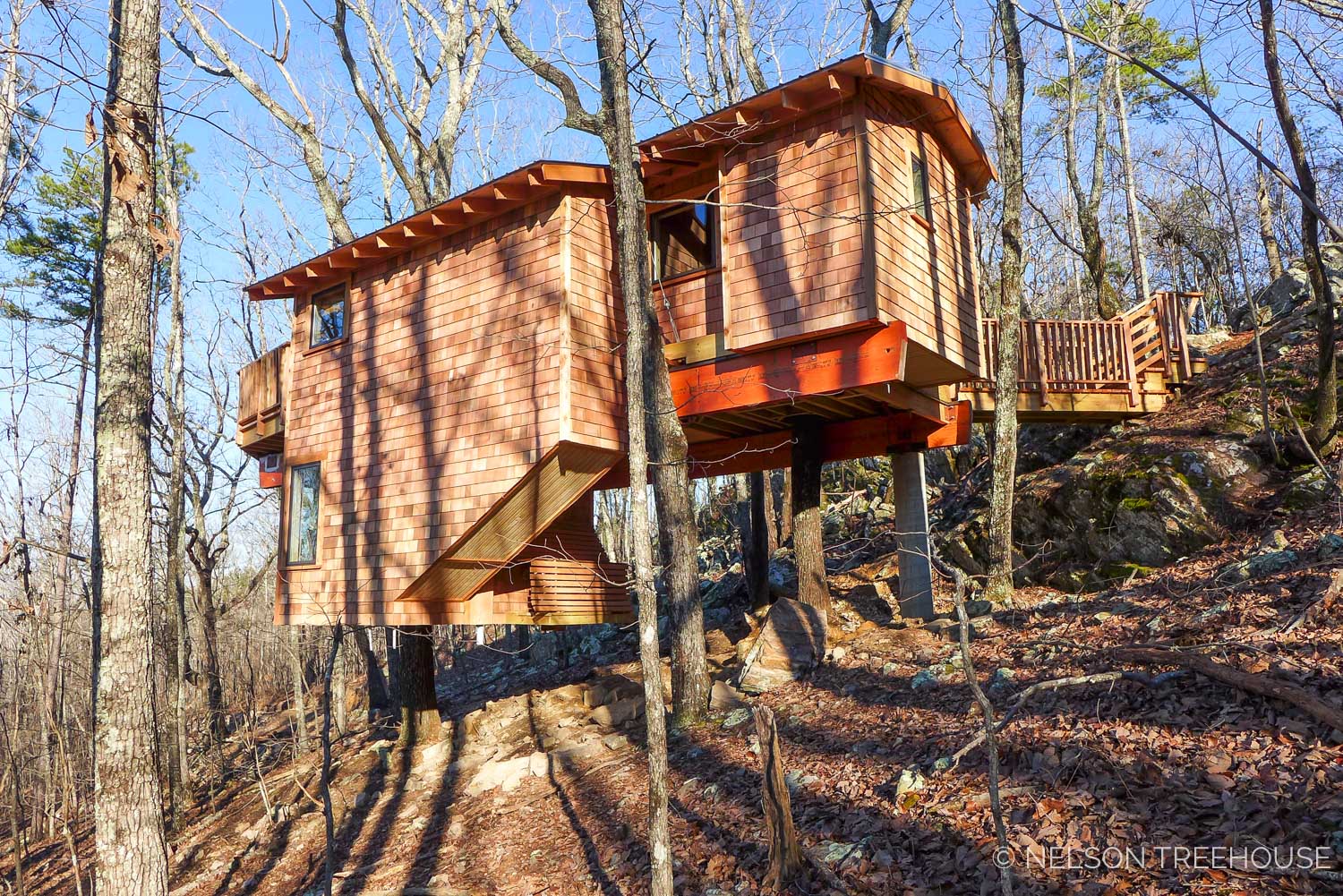 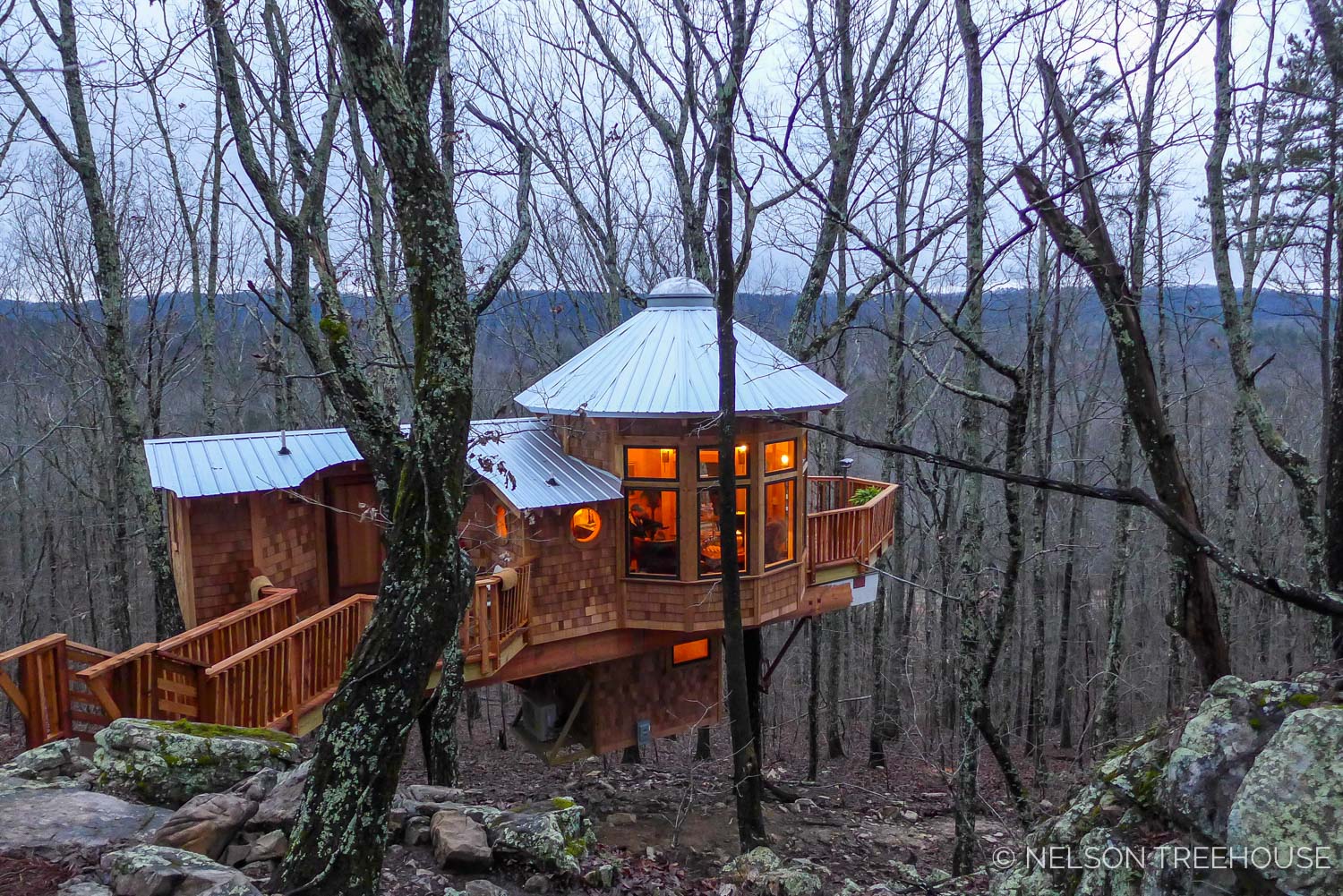 We’d like to thank our clients, Suzanne and David, for a creative and inspiring build. We’re so touched that Suzanne gave David this treehouse as a gift — is there any gesture more romantic than that?!

Let us know your favorite part of this treehouse in the comments below! And take a look at all our photo tours from Season 11 of Treehouse Masters.