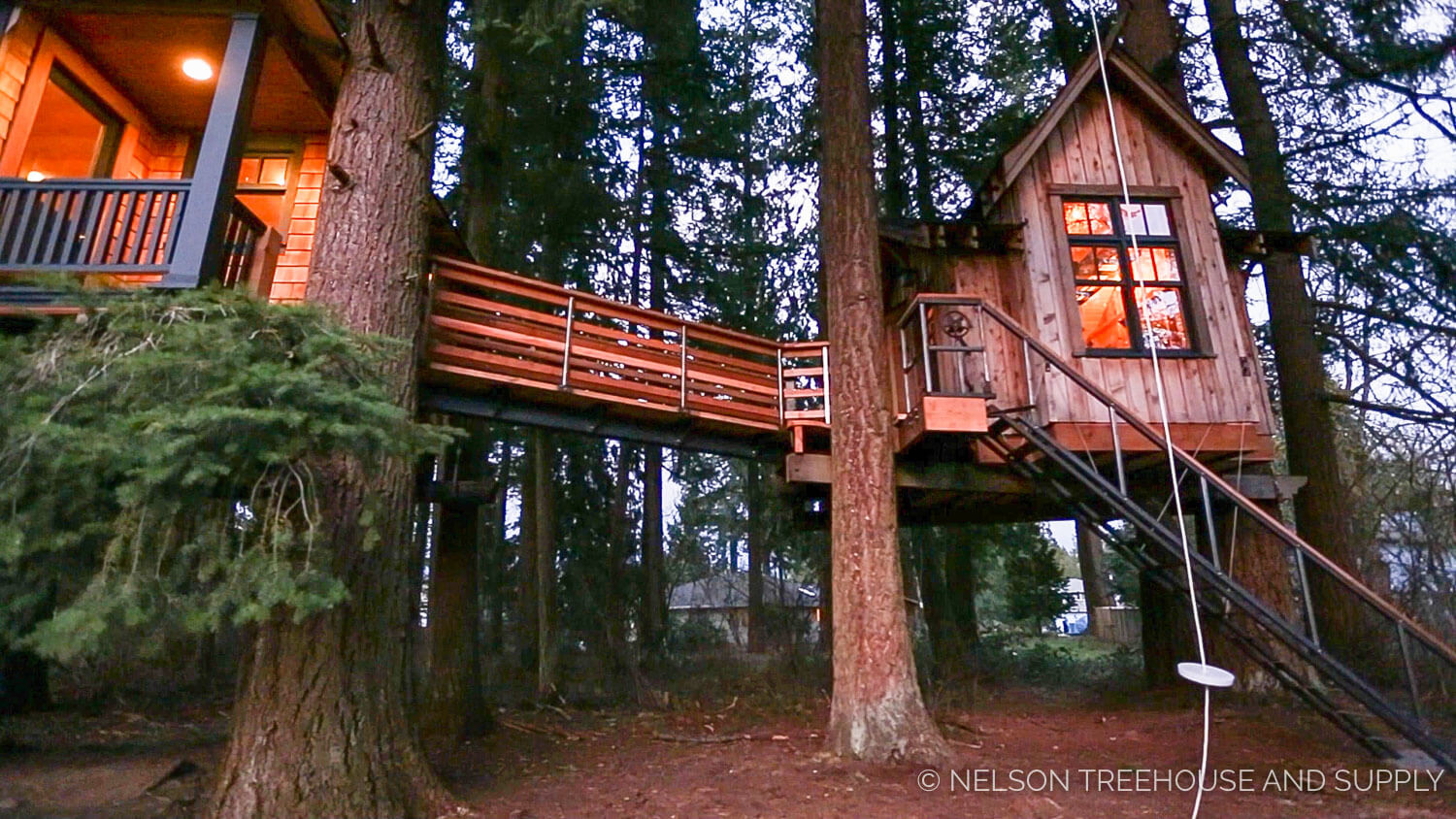 Pete was overjoyed to rehabilitate a treehouse he had originally built in 1994 at his and Judy’s home in Washington. Pete used this arboreal pod as an office for seven years, and built the adjacent treehouse with a group workshop in 2005. You could say that Nelson Treehouse and Supply got its start in that very first treehouse office! 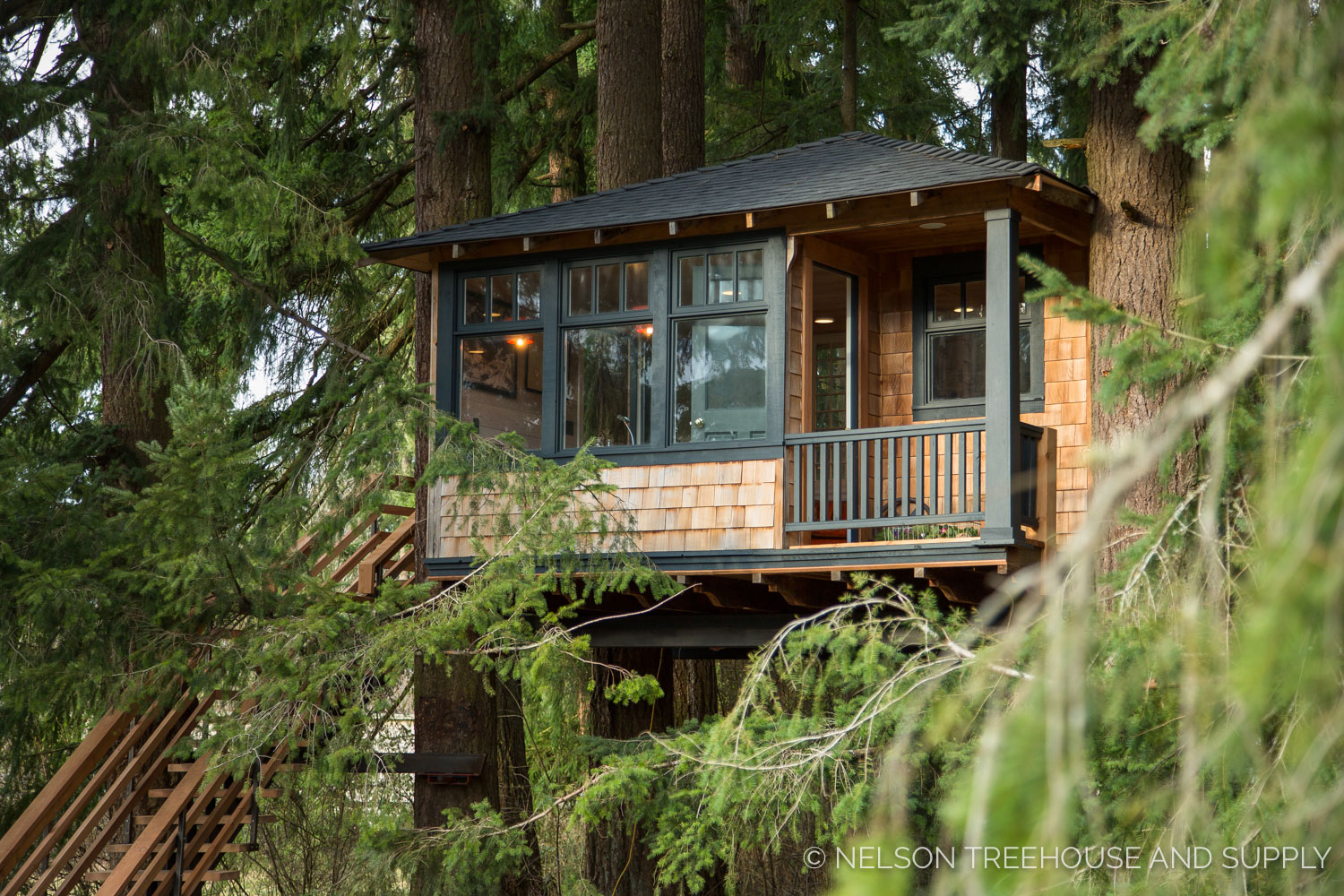 Judy and Pete sold their home (with these two treehouses) in 2009 – it was bittersweet to leave a place with such important memories. So when the property’s new owners, Deb and Shawn, called to ask for a “treehab,” Pete couldn’t wait to revisit his treehouse roots! The couple asked Pete to revamp the treehouses so they could use them as office space for their marine consulting firm. 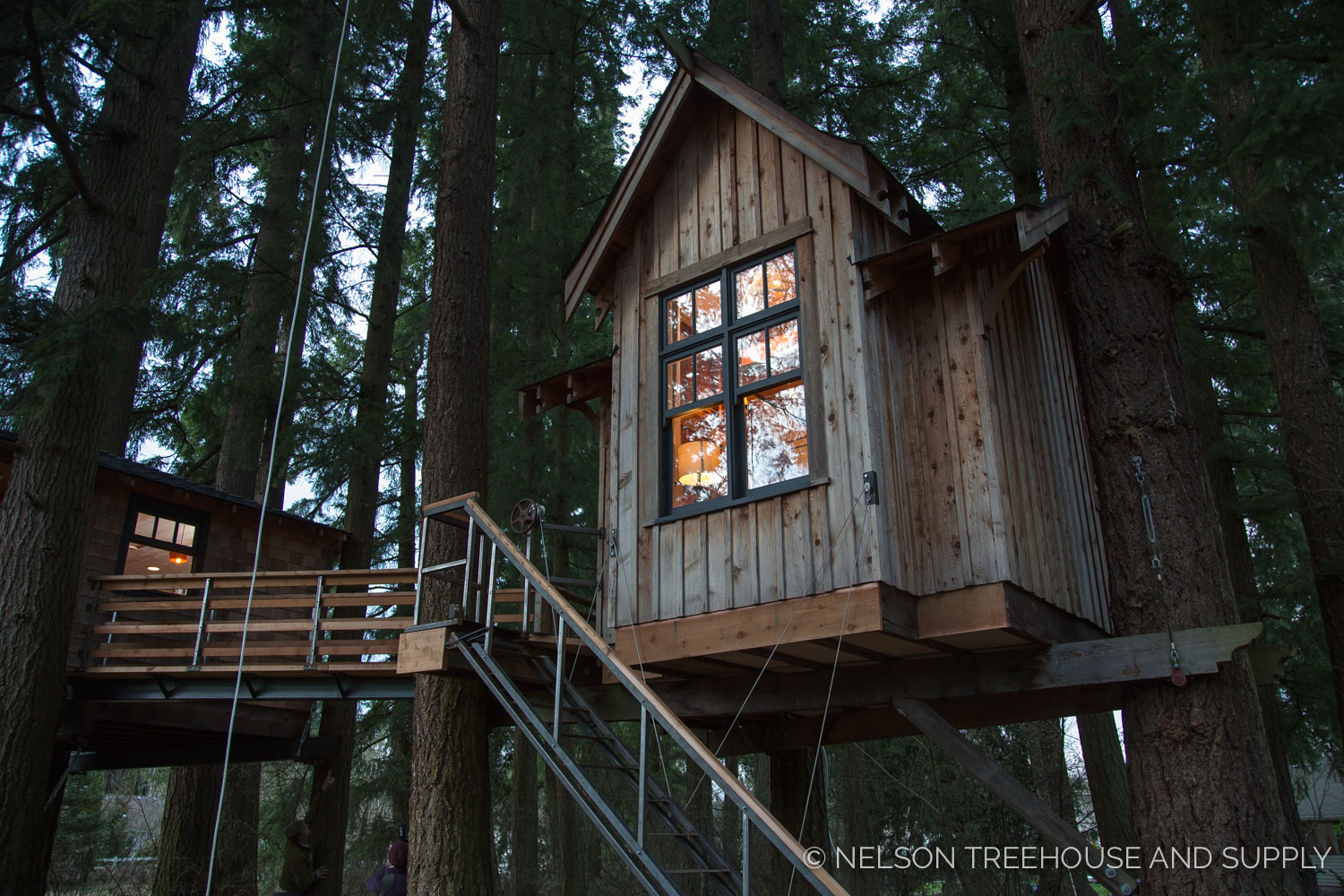 Upon his return, Pete was shocked to see his treehouse babies in stages of decay – after 20 years, the stairs were falling apart, beams were bending, and the bridge was crumbling. Pete collaborated with Architectural Elements, a local Seattle metal fabricator, to replace the deteriorating supports with steel beams, stairs, and base for the bridge. These strong metal components will ensure that the treehouse endures for years to come. 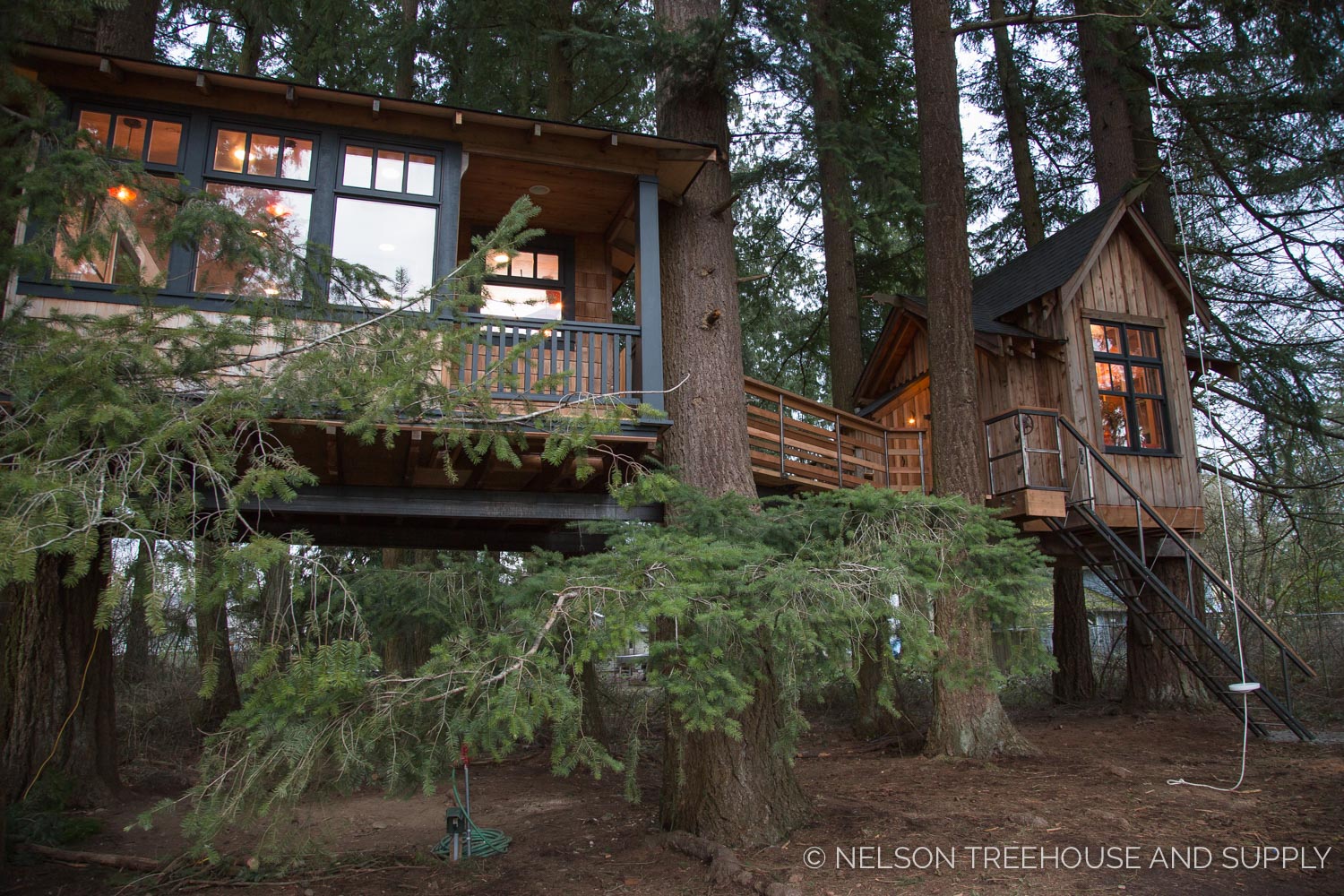 Pete used to love to sit on the lanai porch outside the office pod (on the left), soaking in the sounds of the forest.

Pete had originally planned to outfit the second treehouse (on right, above) as a bathhouse, complete with a clawfoot tub. Around that time, he and Judy began developing TreeHouse Point – the plans for the B&B drew Pete’s time away from his own bathhouse treehouse. He was glad to get the opportunity to finish the treehouse – only this time as a multipurpose conference/playroom space for Deb, Shawn, and their daughters. 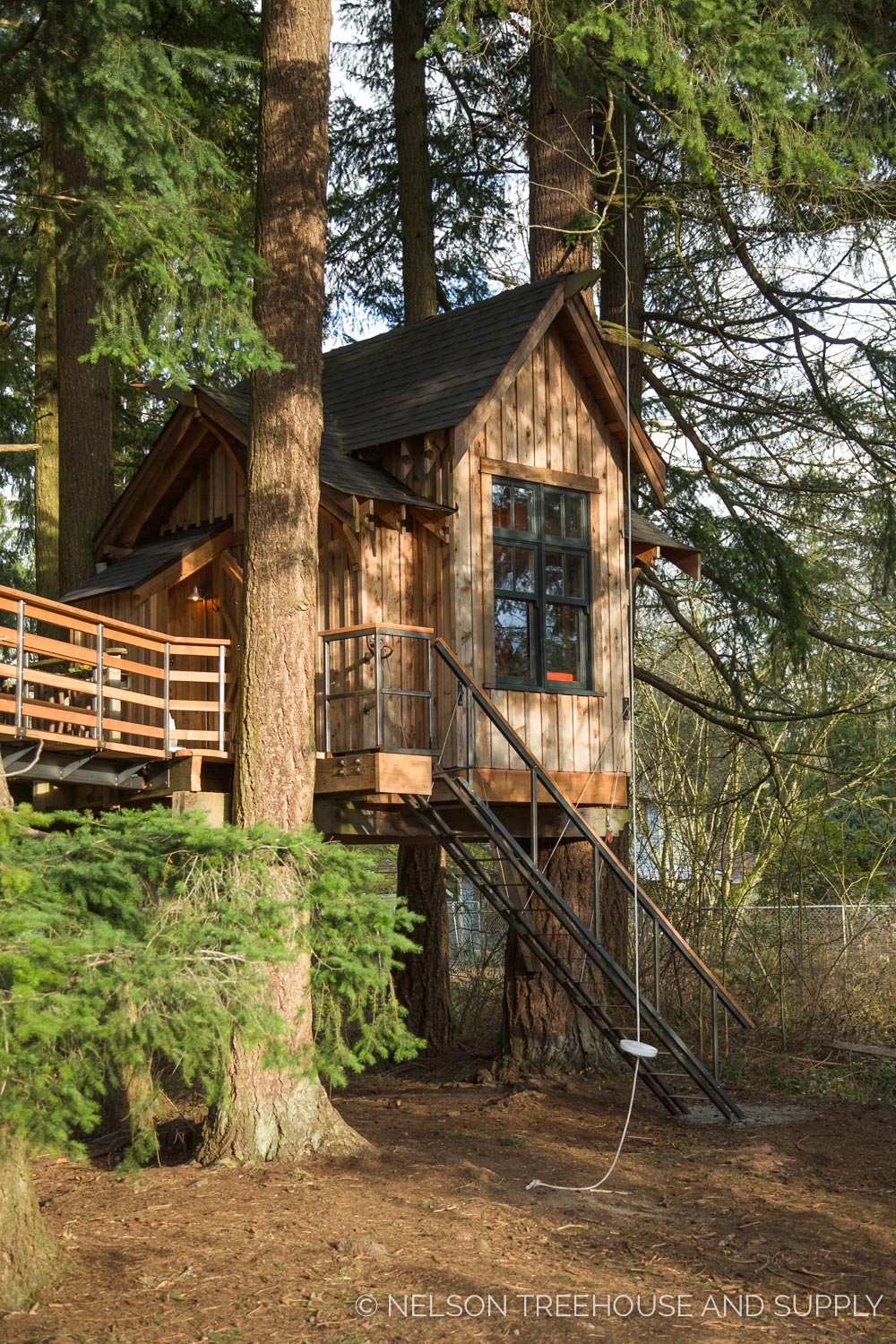 The crew even replaced the original swing with a fresh rope and base. 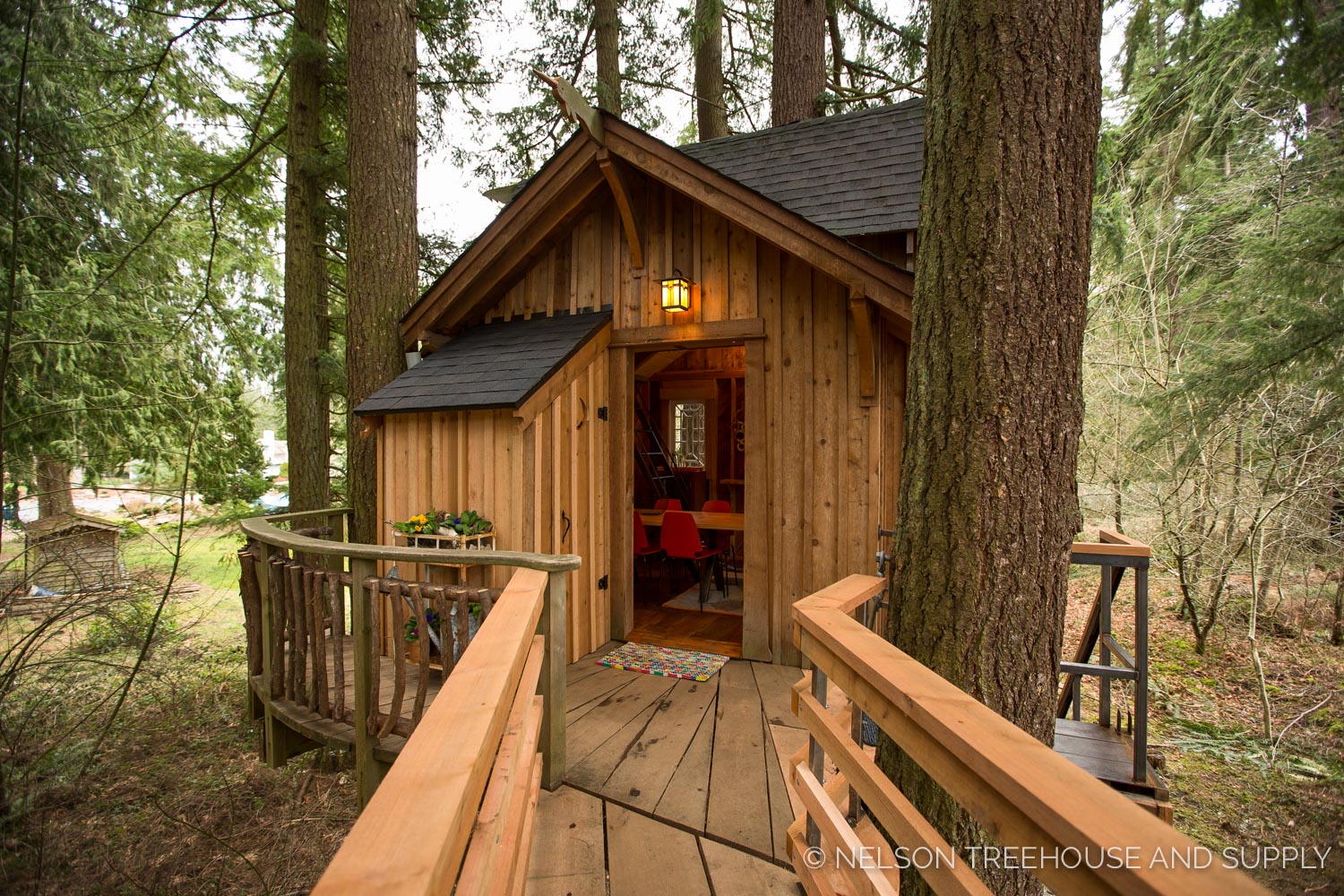 Pete carved the narwhal above the door to the multipurpose pod – it makes a sweet nod to Deb and Shawn’s marine consulting business. 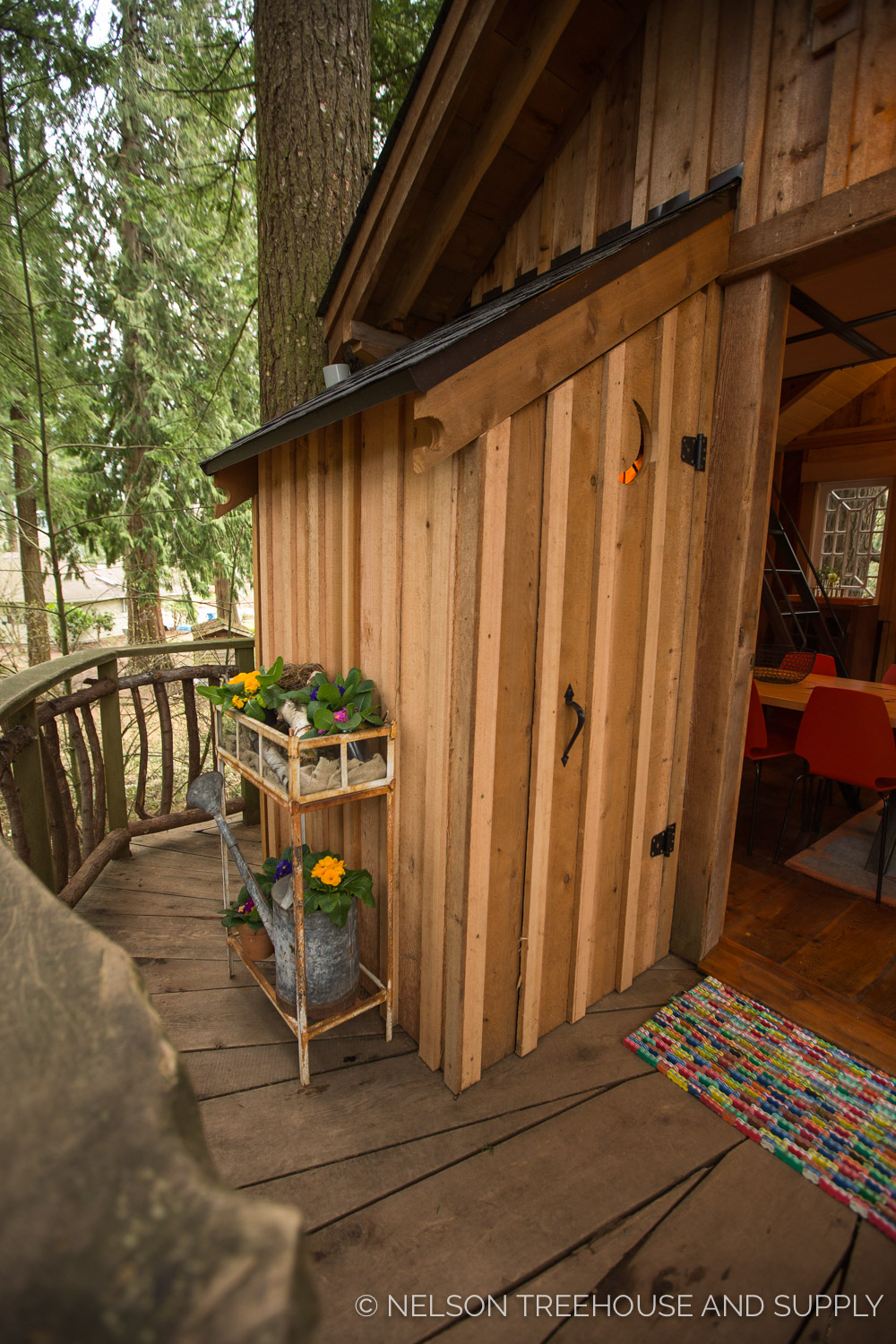 The crew added an outhouse with a composting toilet on the deck of the conference pod. 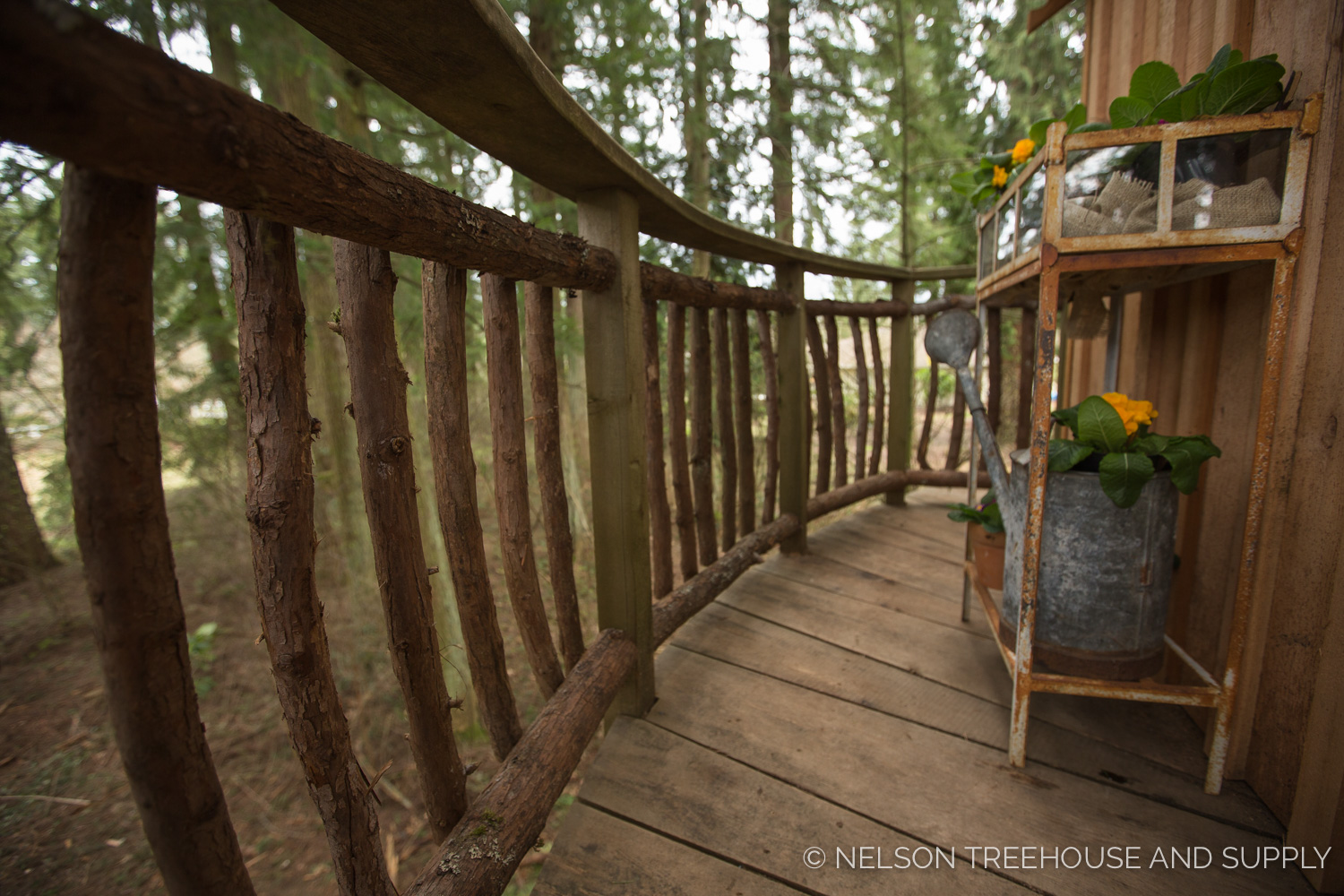 Natural branch railings look at home in the forest. 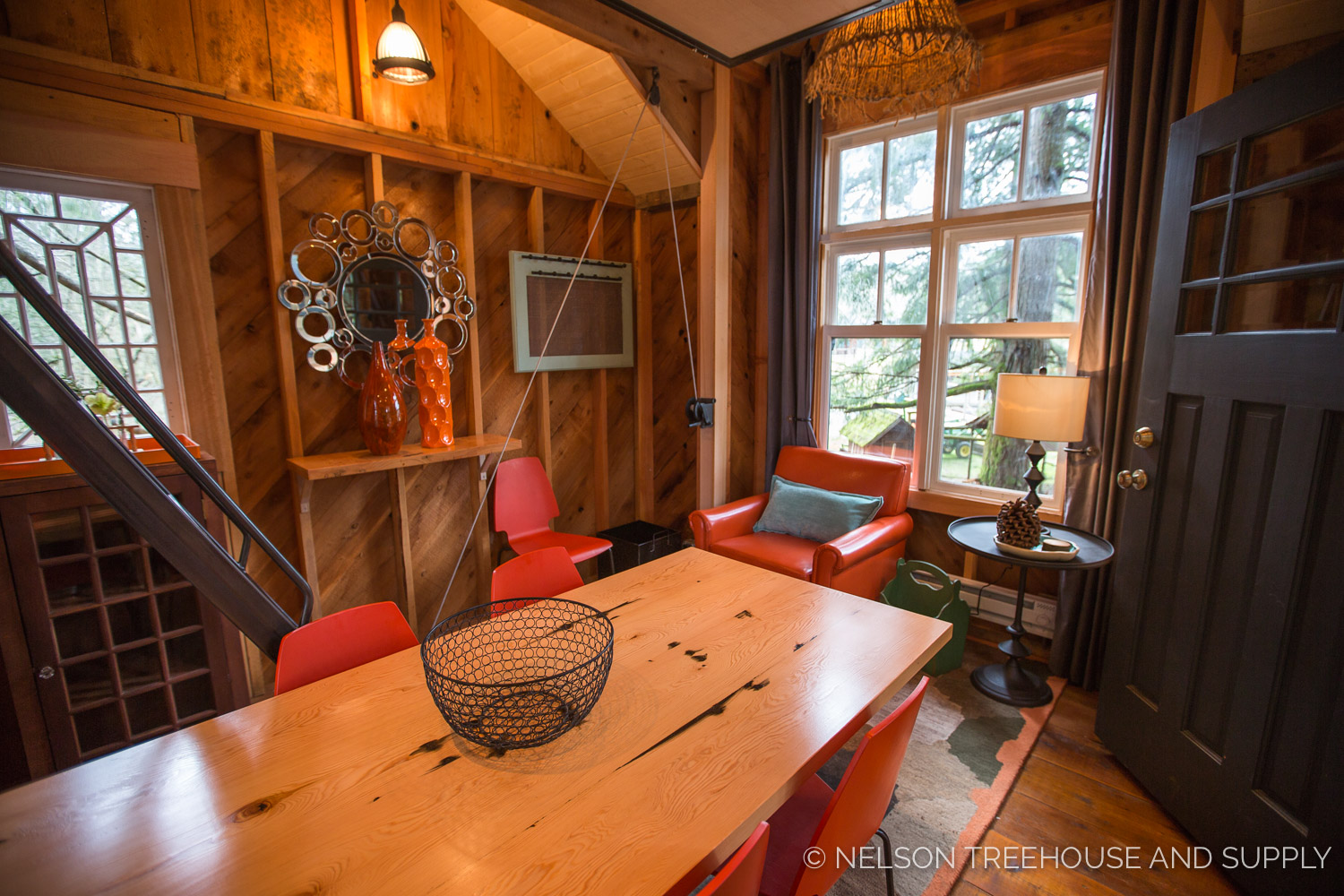 Inside the multipurpose pod, the metal stairs to the bedroom loft can easily be raised for additional space. 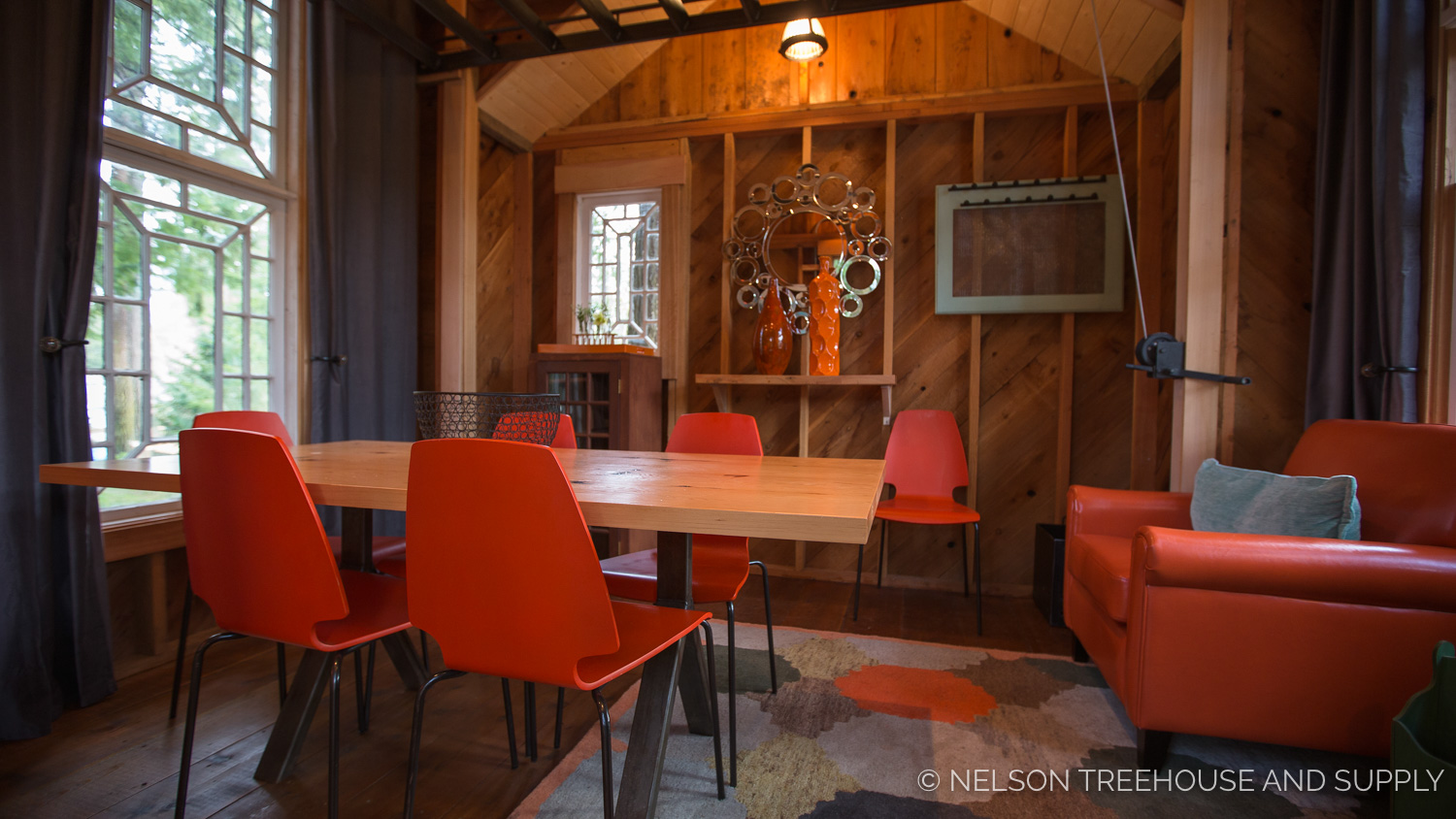 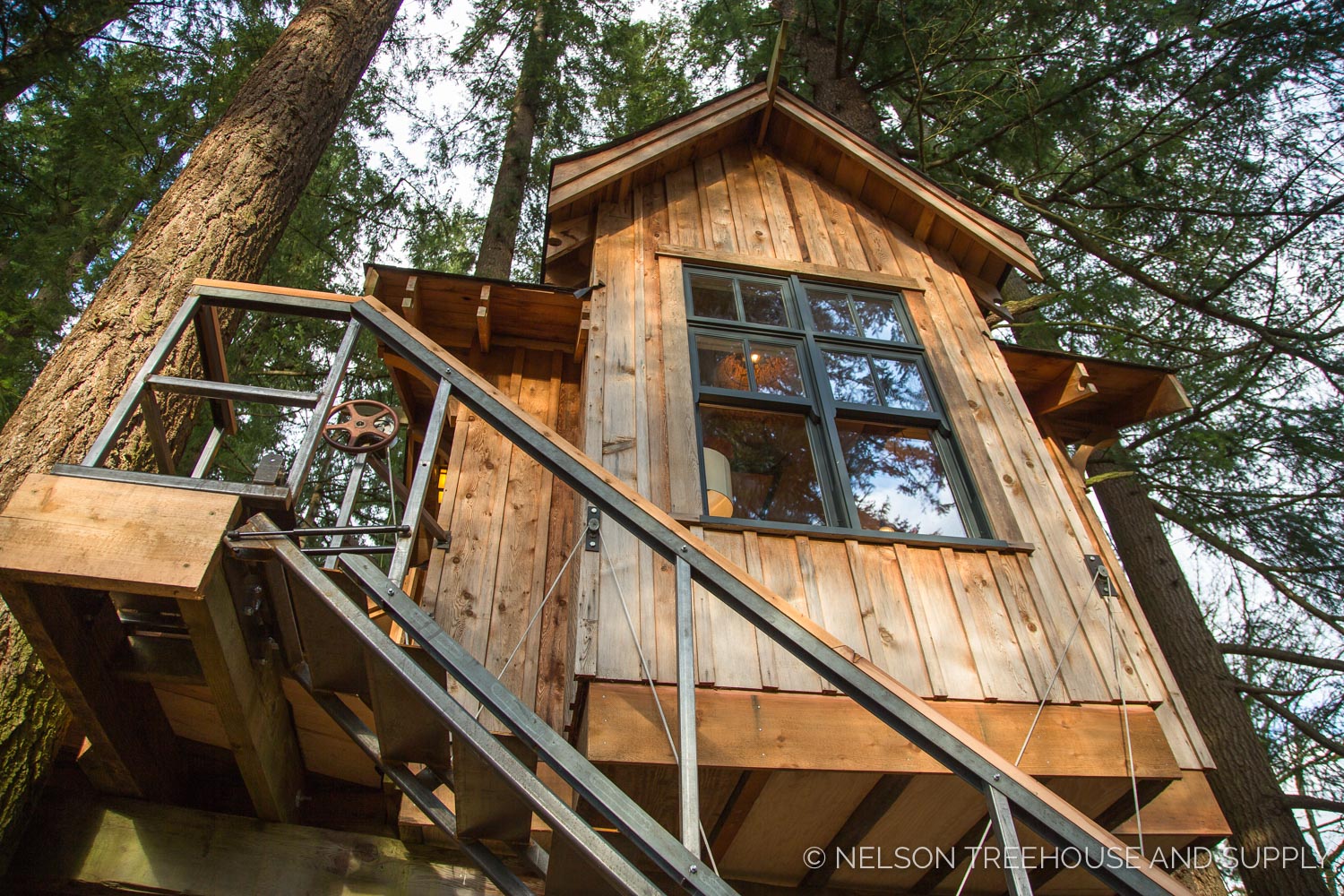 Pete learned a lot about treehouse design in the 20 years since he built his original office treehouse – in 1995, he had made the novice mistake of bolting the beams directly to the trees. As the trees grew, they swallowed the bolts, pushing the beams outward and causing them to contort the treehouse. Returning in 2014 was an excellent opportunity to replace these bolts with TABs that won’t push beams out as the trees grow or cause harm to the host trees.

To replace the original wooden beams with steel, the crew first installed TABs below the wooden beams. They then slid the metal beams onto the TABs, before cutting away the wooden beams and gently lowering the structure onto the steel. The crew from Architectural Elements then welded the steel beams to metal components that connected to the wooden base of the treehouse. 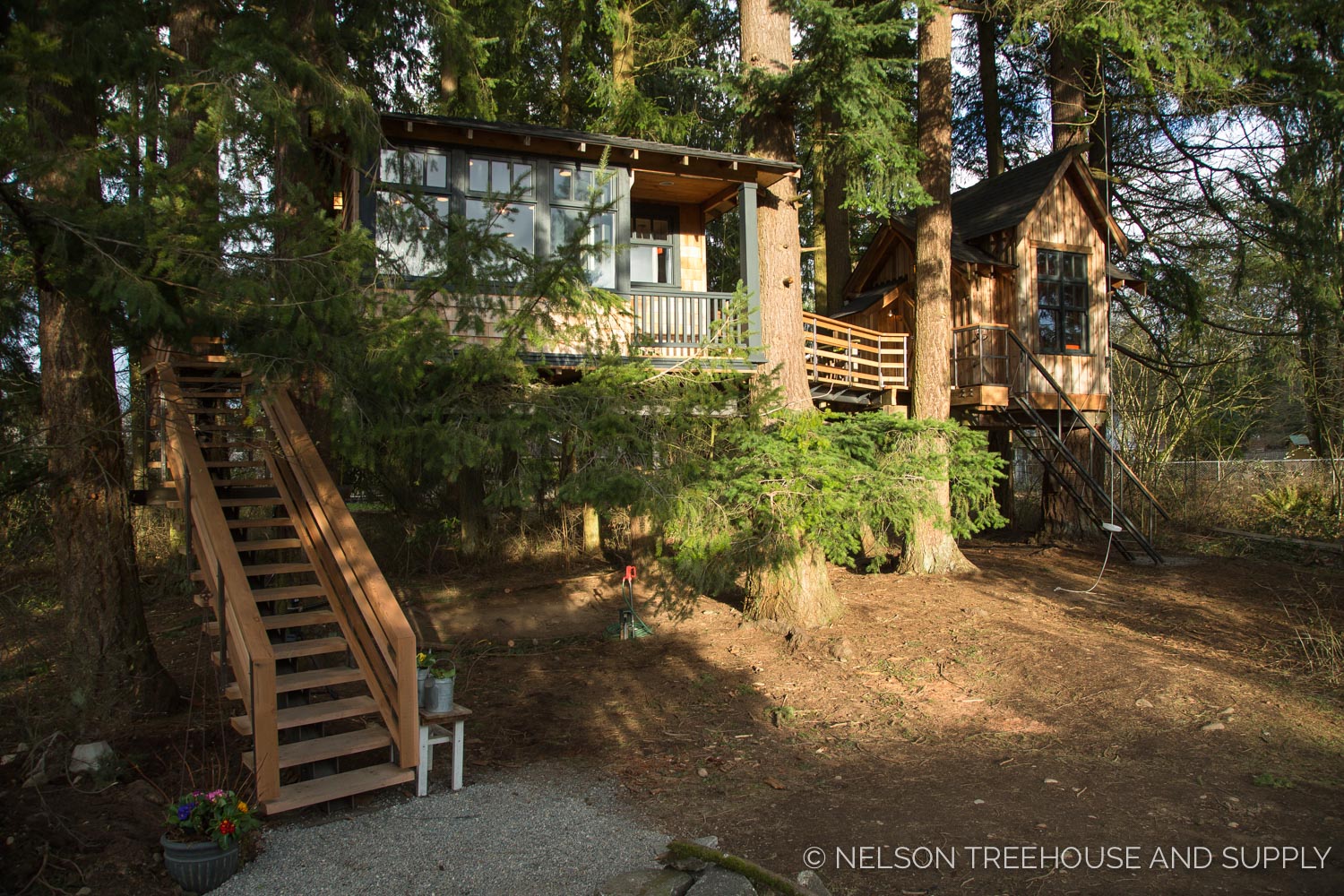 The metal support system for the stairs is comprised of two parts: the first is directly connected to the treehouse deck, while the second is attached to a skid plate on the floor. This allows the staircase to sway with the trees without breaking or pulling on the treehouse. 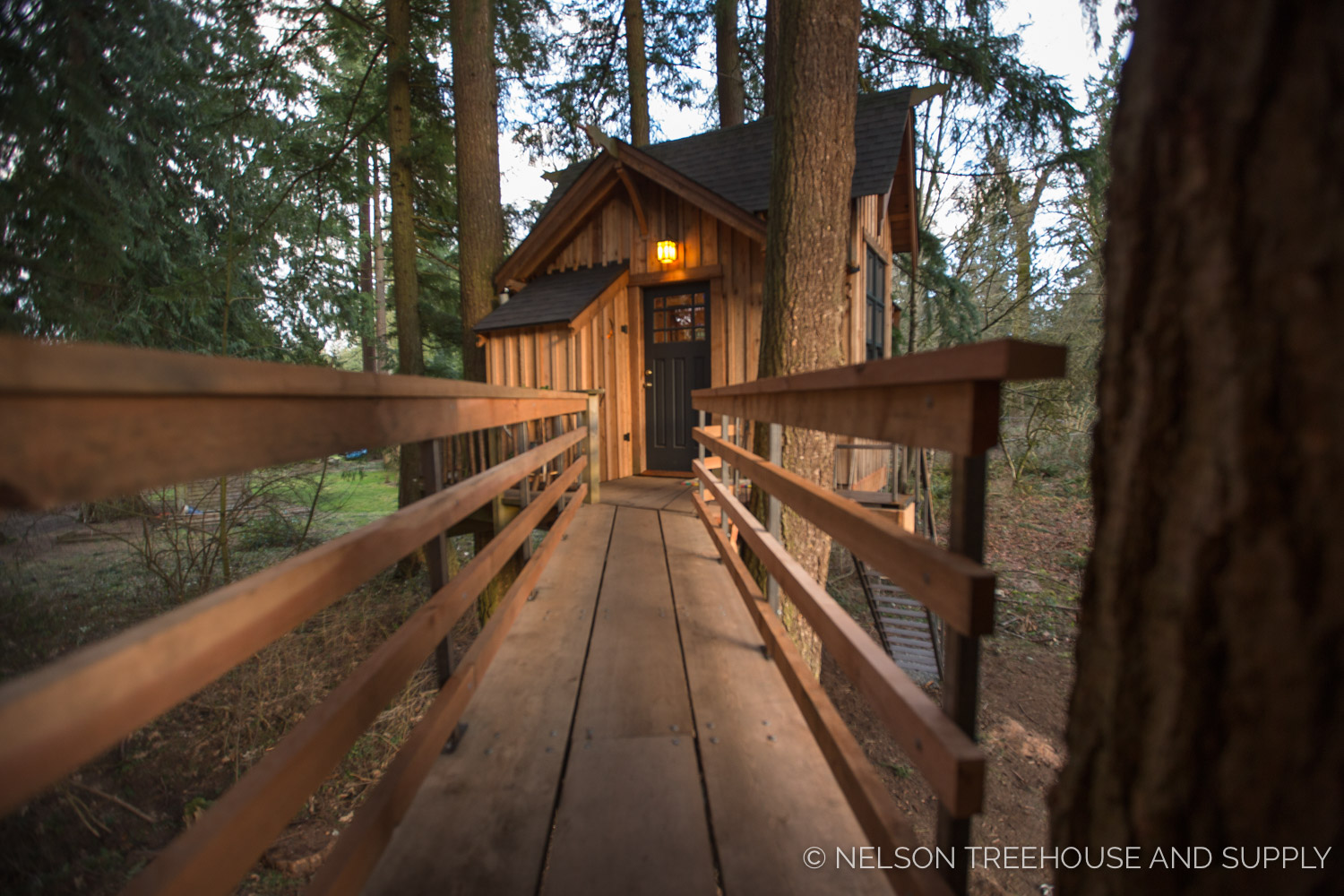 The metal base to this bridge is engineered to allow movement with the trees – hinge plates on either end and a telescoping arm enable it to gently move forwards, backwards, and side-to-side without buckling or causing damage to the treehouses. 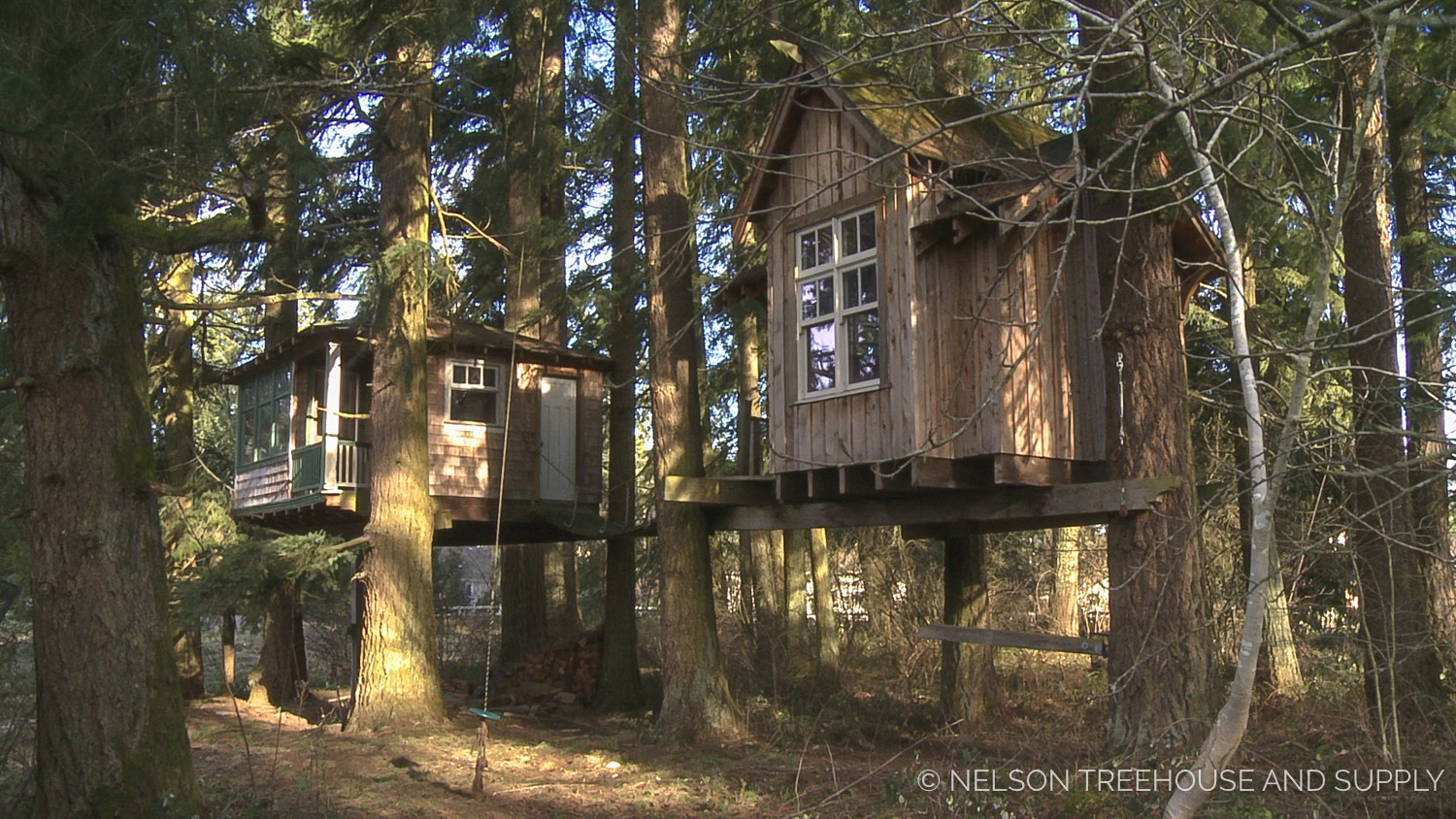 Daryl also has personal history with this treehouse – he lived in Pete’s original office pod for six months when he began working on builds around the country for Nelson Treehouse and Supply. 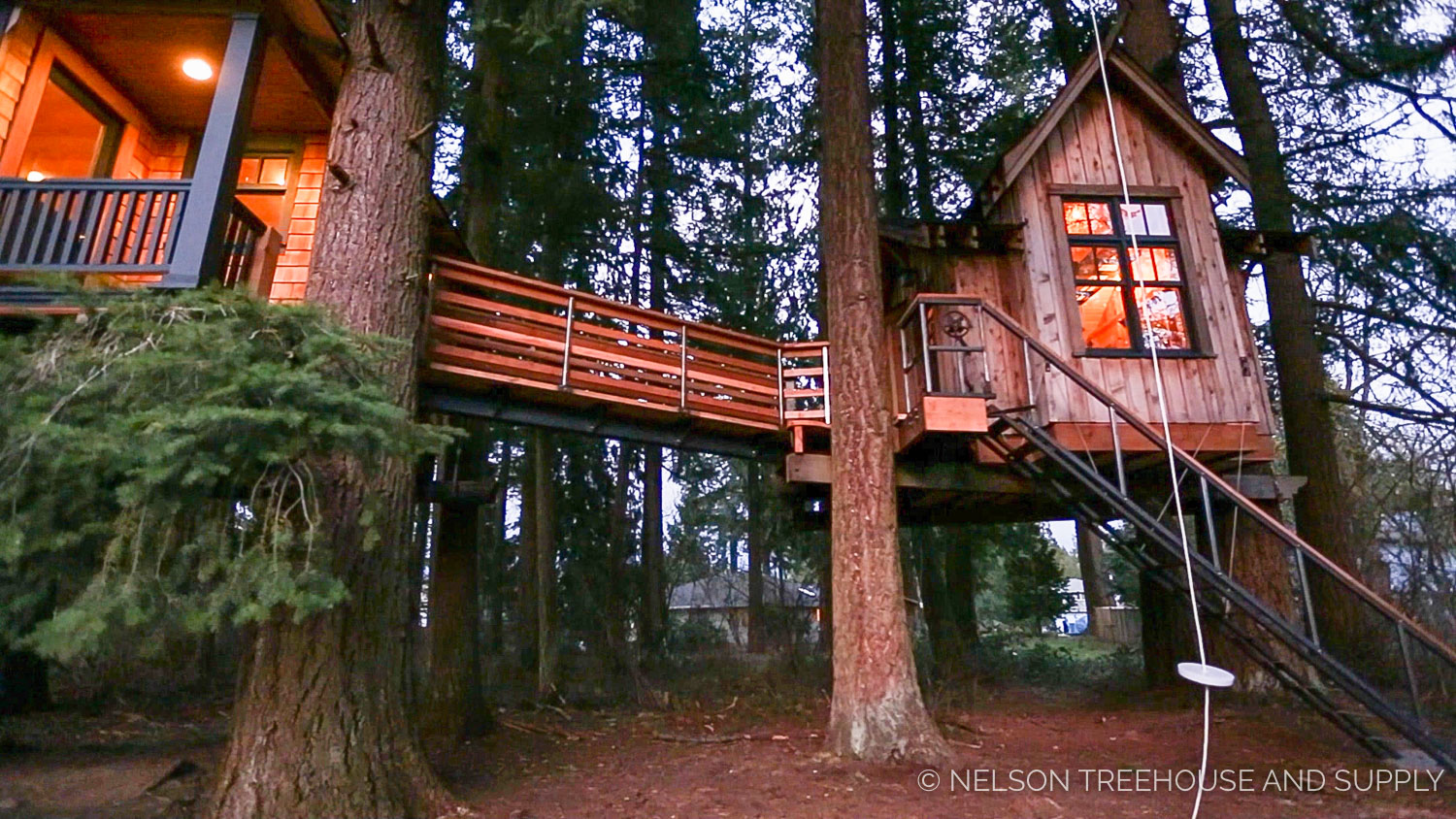 It was an honor to return to “treehab” such an important Pete Nelson original! Thank you, Deb and Shawn, for an incredibly meaningful build.