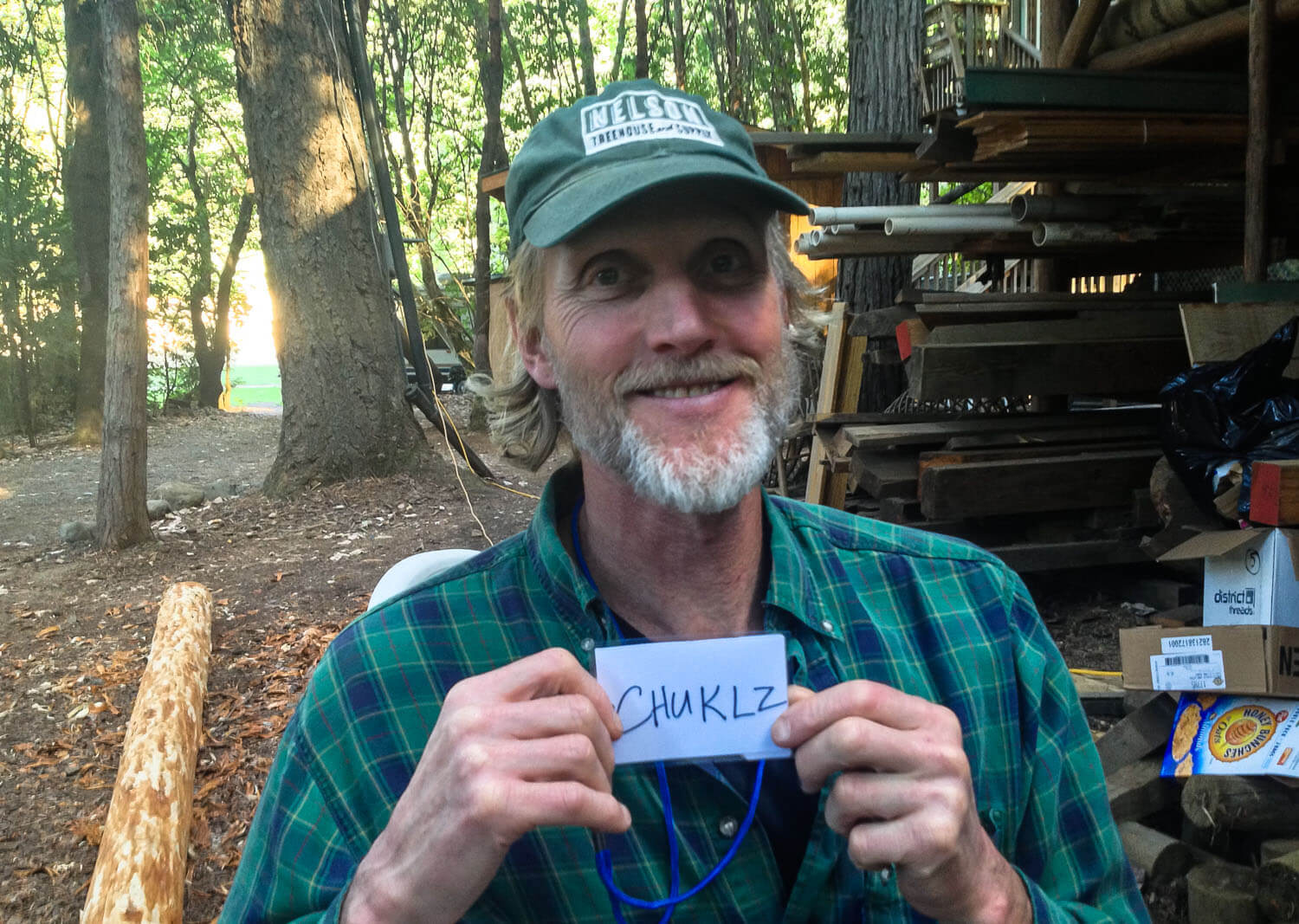 SHIVER YE TIMBERS and stone the crows, because we may have found the bonafide most interesting man in the world… Chuck McClellan! Prepare to be amazed by this multi-talented, adventure-seeking, autodidactic, massage therapist/master carpenter/world traveler. You may have seen Chuck on the show, but how well do you really know the enigma behind the pithy wisdom and habitual tea-drinking? Find out more about this true treehouse master with these 10 fascinating things about Chuck. 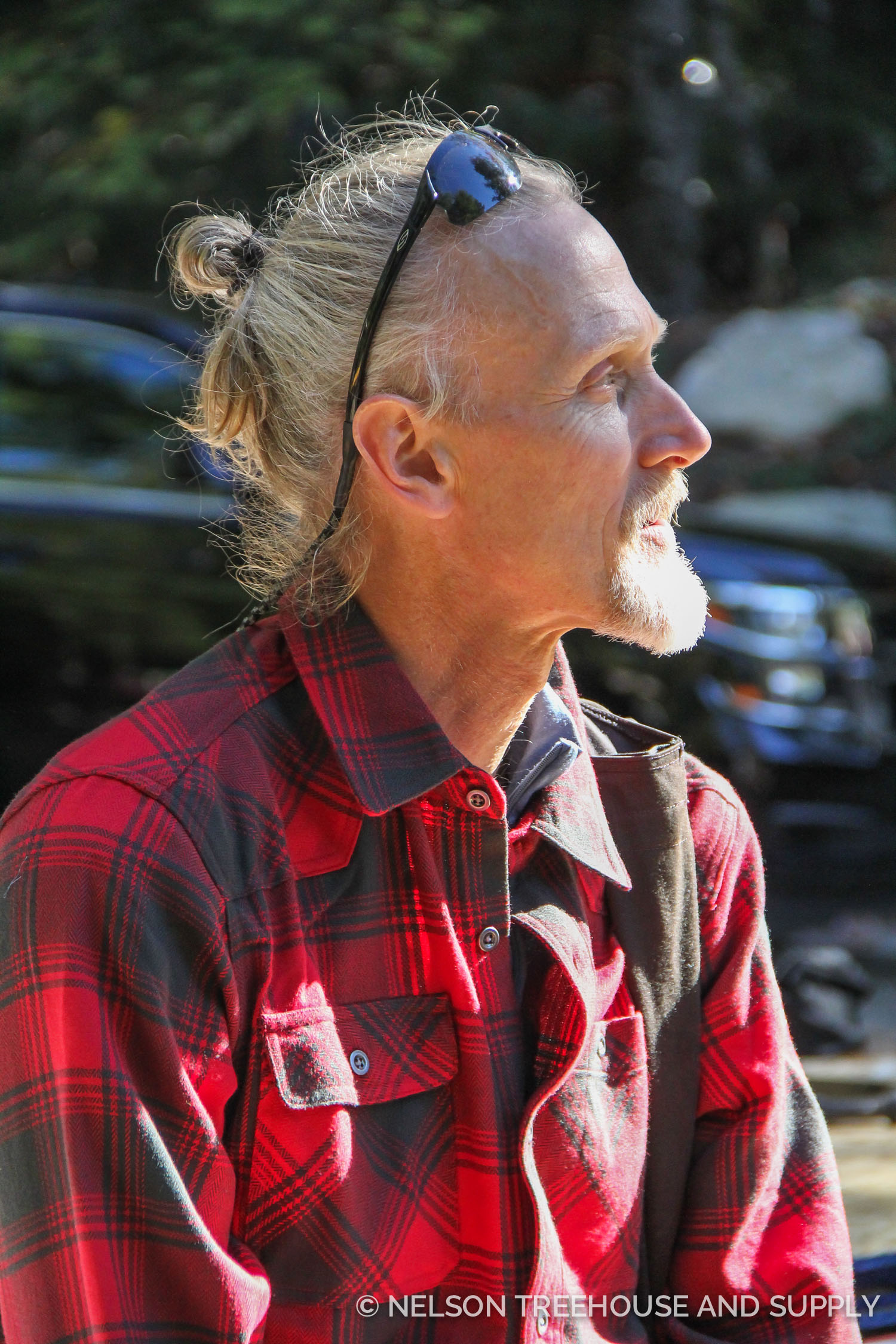 As a child, Chuck built treehouses in the backyard of his family’s duplex. He learned carpentry through practical application on the job and has long harbored an interest in the melding of design and build worlds, as well as energy-efficient building practices. Chuck was a seasonal carpenter and general contractor in Seattle for many years before meeting Pete. For several seasons, Chuck traveled to Antarctica to work as a carpenter at the McMurdo Station. He would spend four to five months upgrading the research station’s facilities and infrastructure, and heading off-base into the frozen, surreal landscape to set up field camps.

Chuck emerging from a crevice in Antarctica. 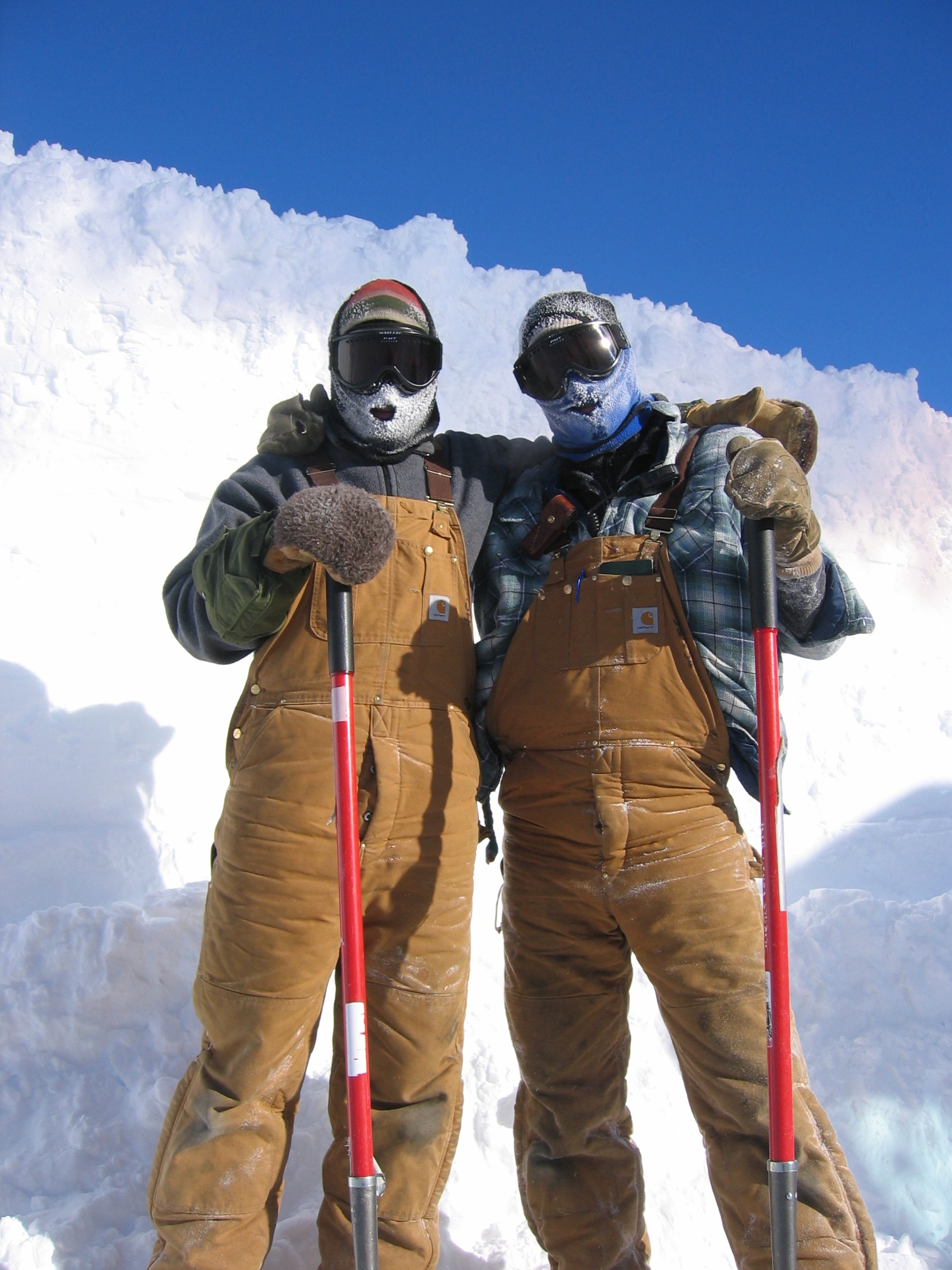 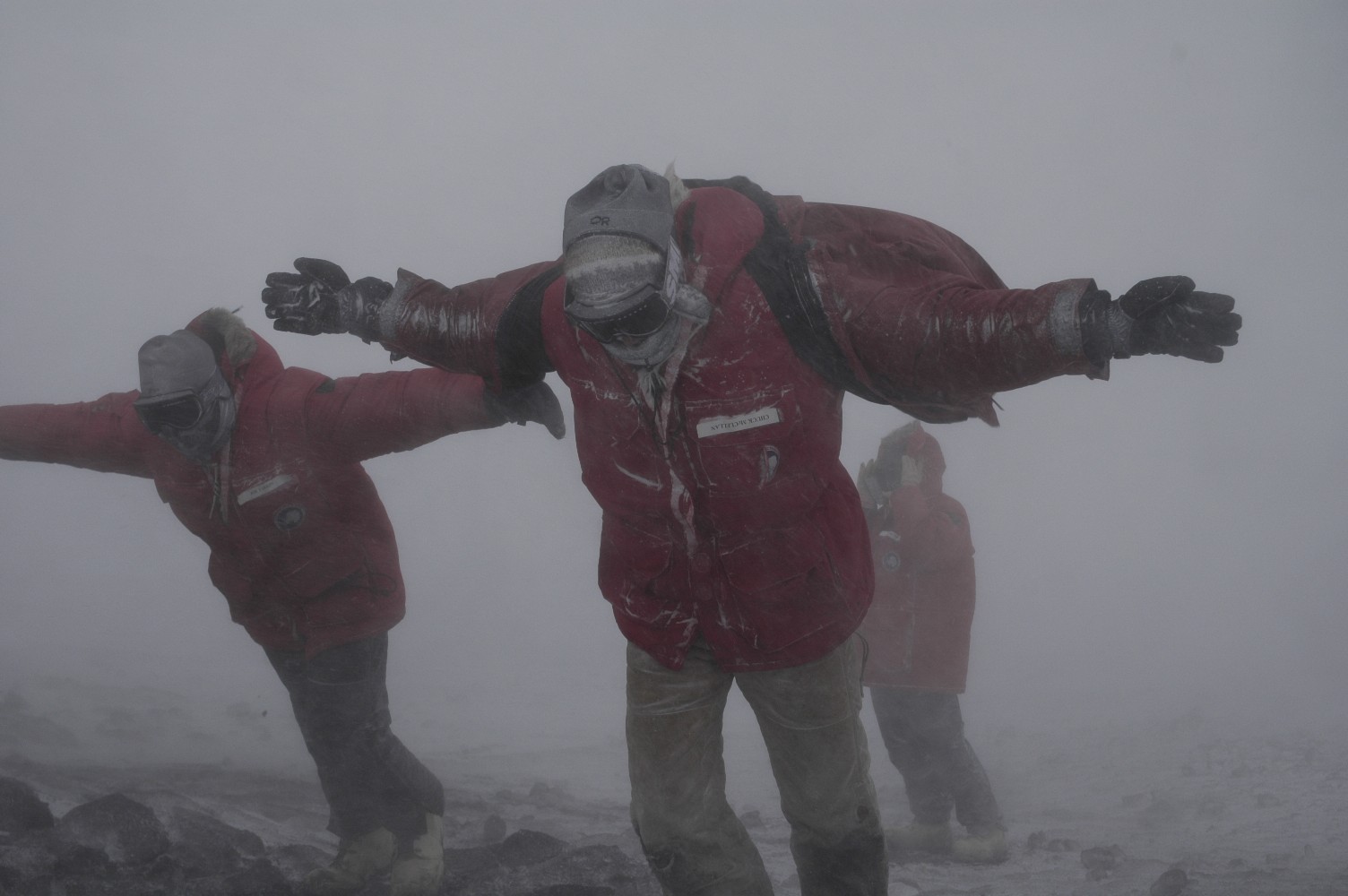 Another balmy day at the bottom of the earth.

Chuck’s partner, Teri, first referred him to Pete when she was working for Treehouse Workshop (the precursor to Nelson Treehouse and Supply). At the time, Pete was in need of an additional carpenter for the Longwood Gardens treehouse in Pennsylvania, and invited Chuck to join the crew there. In Chuck’s words, working with Treehouse Workshop on that build “Didn’t feel like a new job. It just felt right, like going home.” Chuck’s penchant for adventure and unusual working environments resonated with treehouse-building, and he quickly became an essential member of the Nelson Treehouse crew. 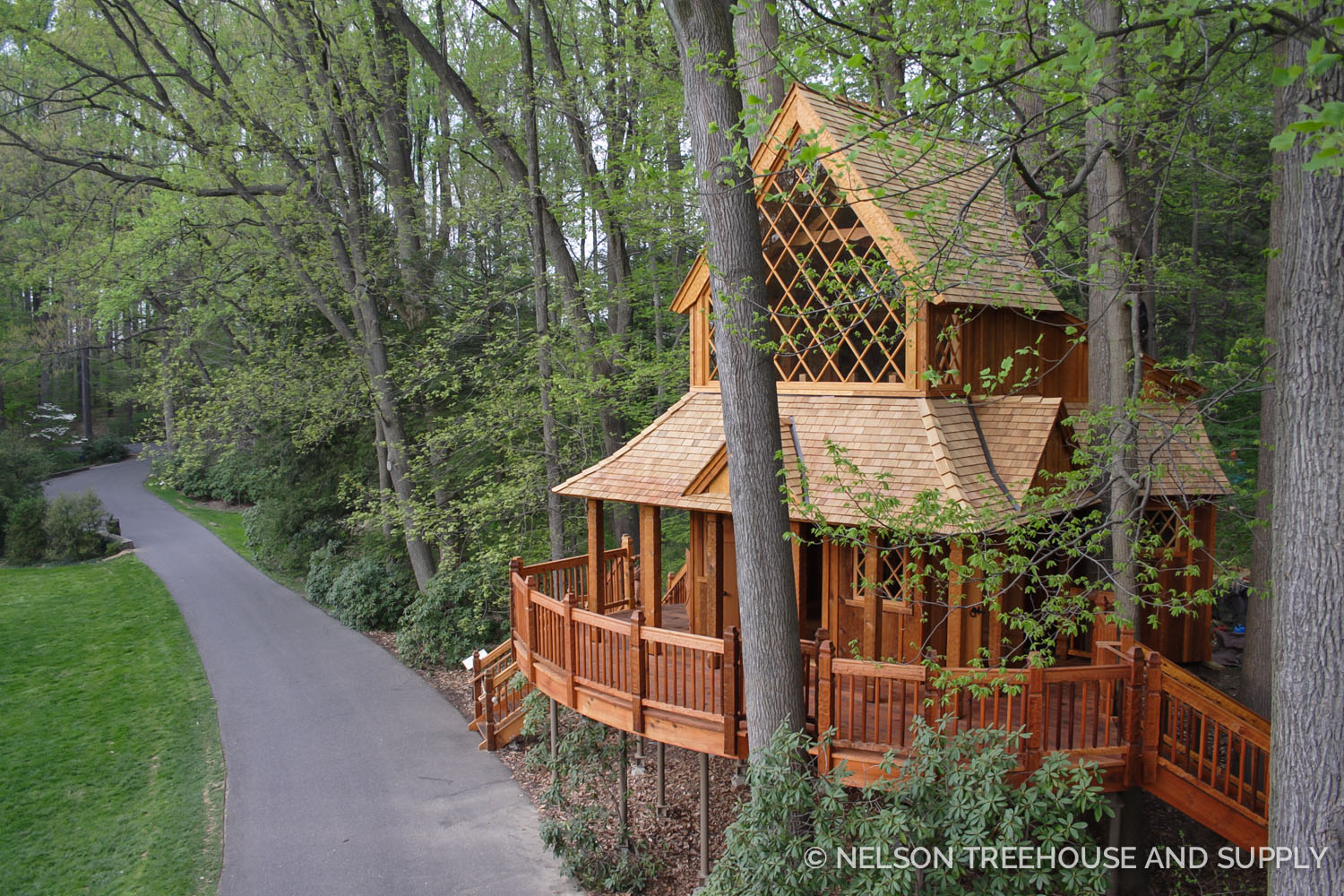 Chuck’s first NT&S job was at the Longwood Gardens treehouse in Pennsylvania.

WHY DOES CHUCK LOVE BOTH BUILDING AND DESIGNING?

Chuck loves the collaborative component to building; he analogizes carpenters to a sports team that is tasked with a common goal. The achievement of that goal is a selfless endeavor, as it demands true collaboration and giving of each individual to the whole. In the process, crew members derive joy and meaning from feeling that they are a part of something bigger than each of them individually. “We can do remarkable things together, and it feels important and good,” says Chuck.

That the end-product of carpentry is tangible adds another level of fulfillment for Chuck; in building, it is “easy to identify progress and completion” since the product is physically real and objectively assessable. In other words, the joy of collaboration and the satisfaction of the tangible product make both the act and result of building meaningful for Chuck. 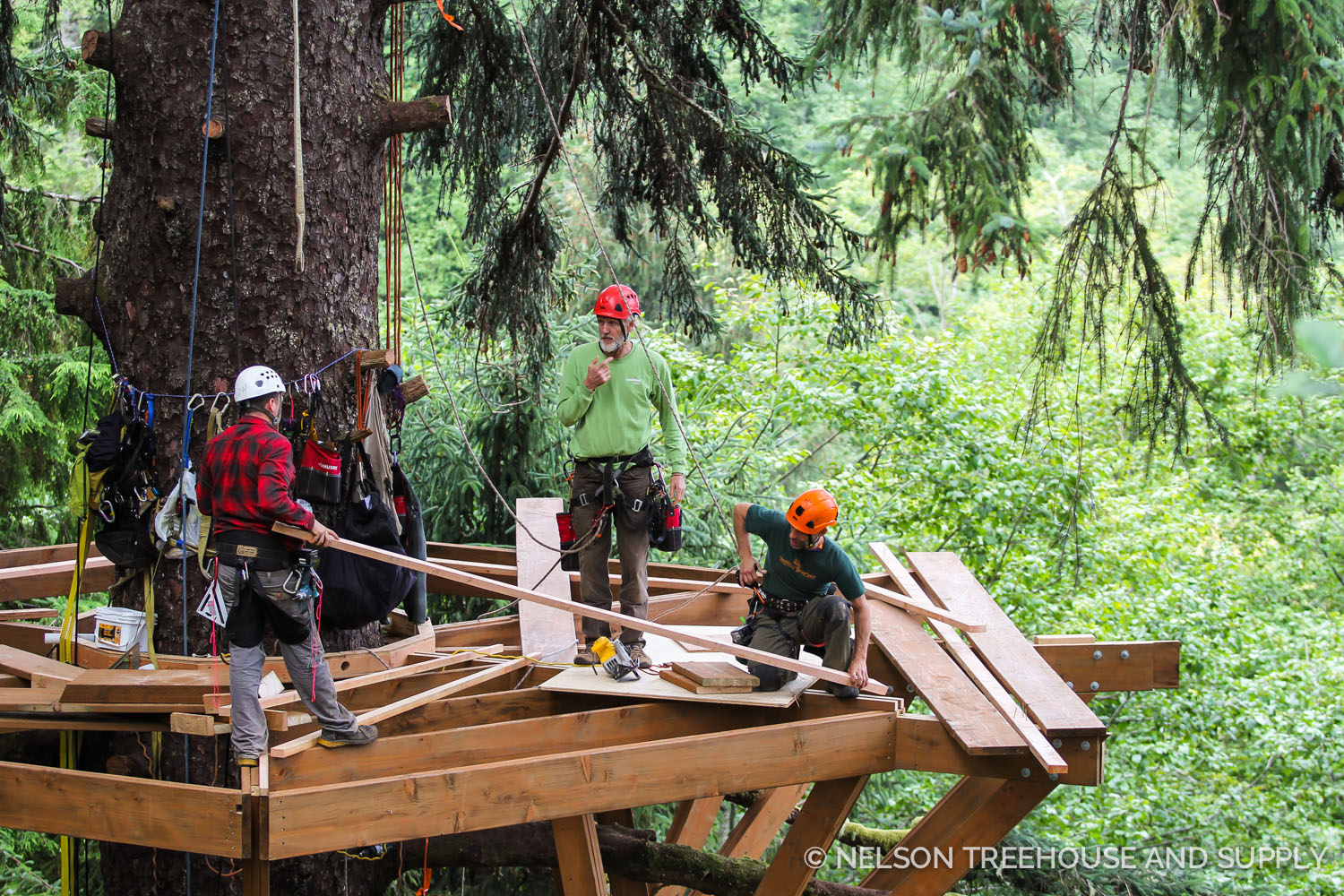 Chuck in action on a treehouse build in Oregon.

Chuck also sees design as a collaborative process, but finds that it differs from building in the type of creativity it demands. Where creativity in building revolves more around problem solving, creativity in design gives Chuck license to move beyond others’ plans and imagine more freely. He brings his deep knowledge of building to his approach to design, and is still very much involved in both components of our treehouses.

IF CHUCK WERE NOT BUILDING TREEHOUSES FOR A LIVING, WHAT WOULD HE BE DOING?

If he weren’t living the treehouse life, Chuck thinks he would be working in Antarctica or Greenland; in his words, he’s “literally bipolar” in his tastes for travel. Chuck loves the dry cold and barren beauty of both poles, and is drawn to people who lead adventurous lives at the literal edges of the world. He believes that adverse work conditions bond workers together and really enjoys this deeply-founded fellowship. 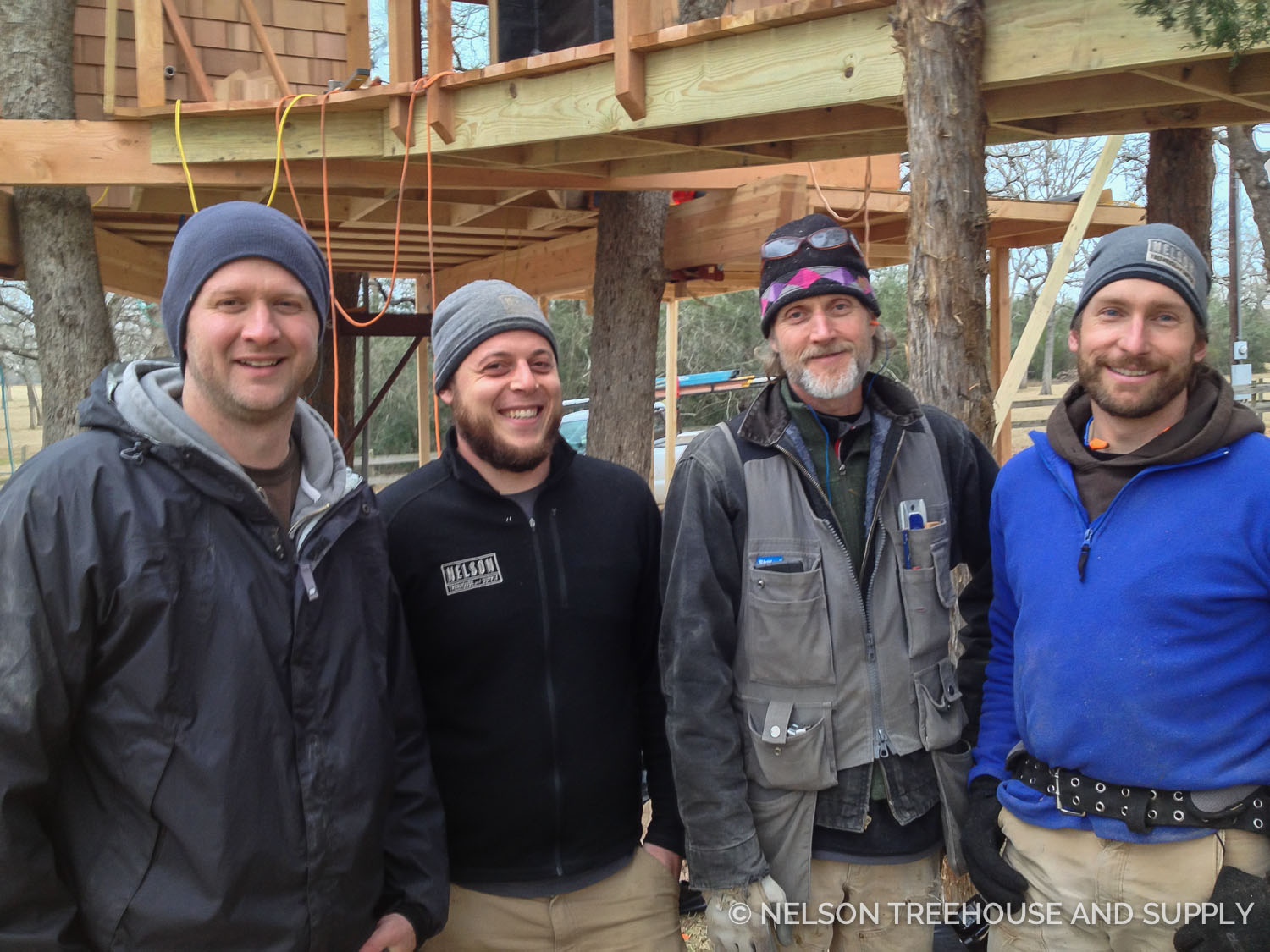 Chuck with his Treehouse Family.

WHAT IS SOMETHING CHUCK HAS NEVER DONE THAT HE WOULD LIKE TO TRY?

Chuck would like to try immersing himself in a new culture with a different language and learn to become fluent. He is especially drawn to the natural and cultural beauty of the Amazon basin and other places in South America, and would like to live there for some time.

Chuck is a long-time attendee of Burning Man, an annual gathering in the Black Rock Desert in Nevada centered on artistic expression and community-building. “There is no other human-built place I can go to get as much inspiration as Burning Man,” Chuck asserts. The “explosion of art and creativity” at the annual gatherings resonates with Chuck’s passion for architectural design, building, and craft, and offers him the opportunity for a powerful, visceral appreciation of art. He also admires the community’s commitment to environmental stewardship and accords to the Burning Man principle of “leaving no trace.” Chuck has only once participated in building an art piece, but plans to make something special at this year’s gathering. 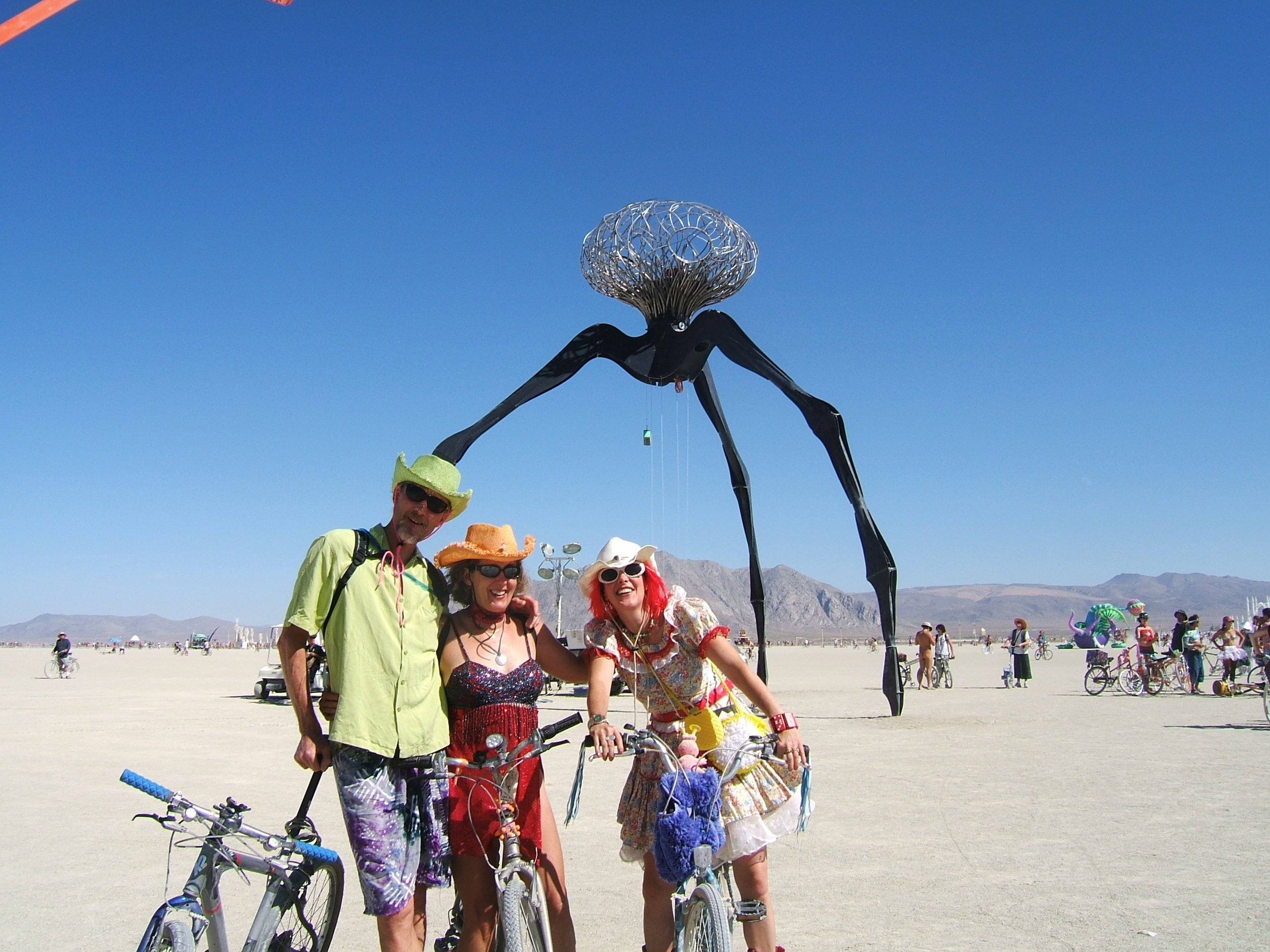 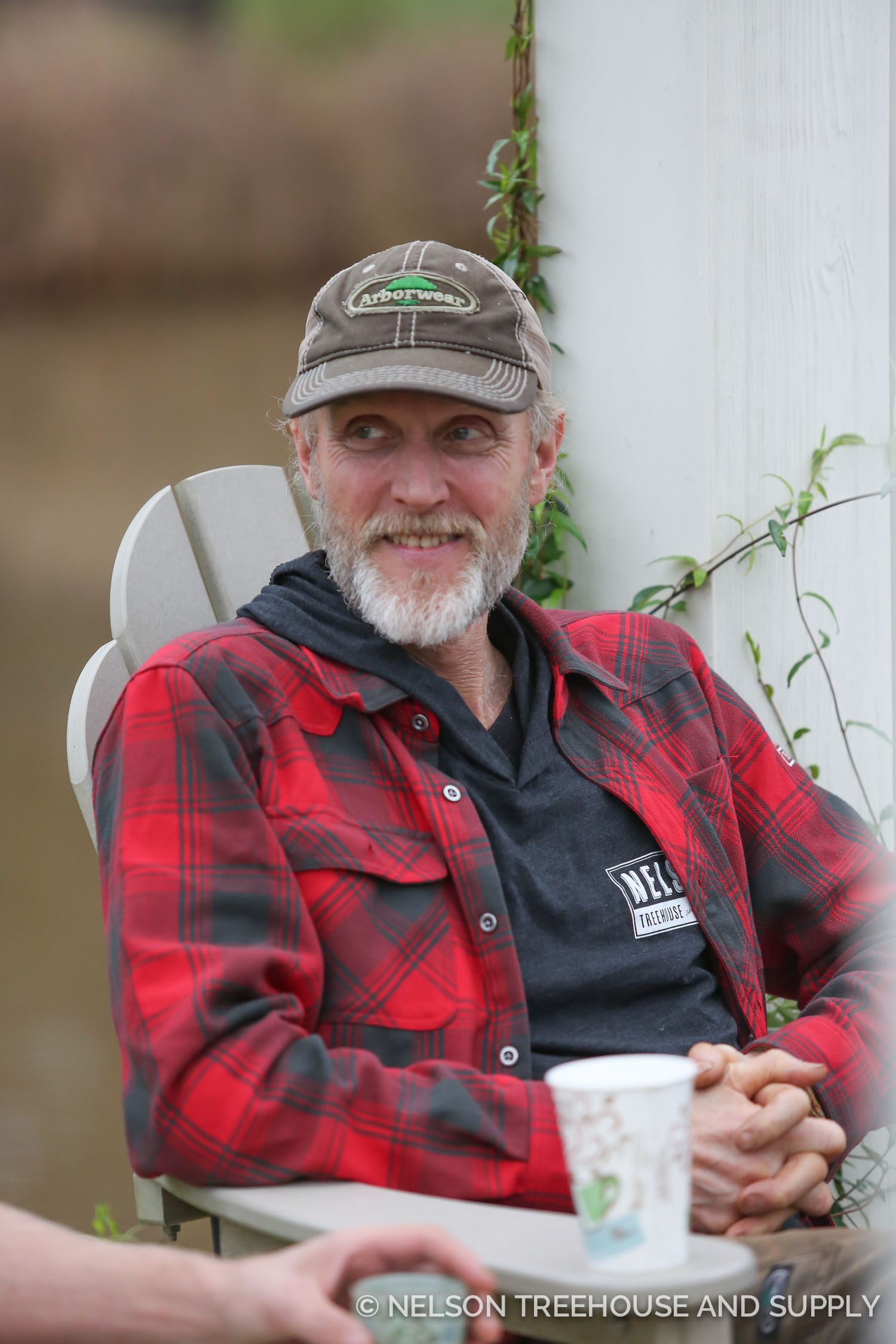 WHAT DREW CHUCK TO STUDYING MASSAGE?

Chuck studied massage in Seattle and was drawn to massage as a tool for social and personal growth. He believes practicing massage has changed how he interacts with others; for instance, he finds he is now able to quickly put people at ease.

WHAT ARE SOME OF CHUCK’S FAVORITE BOOKS?

Chuck’s dream treehouse would have a “classic yet elegant Swiss-Family-Robinson feel to it,” with multiple platforms spread over several trees (ideally oaks with massive limbs). The roofs would be made of canvas, and no space would be walled-in so that visitors would feel intimately connected to and surrounded by nature. 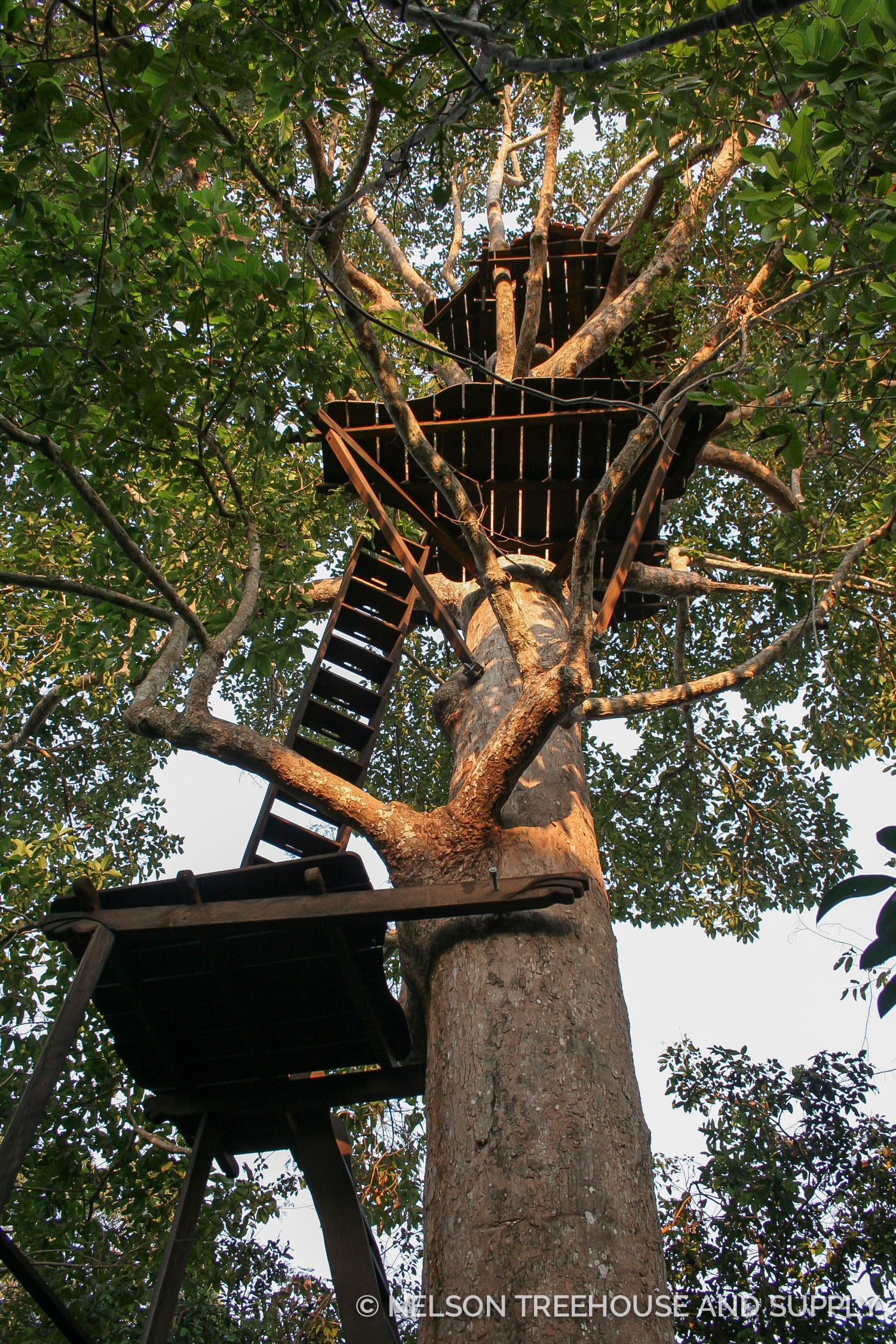 Chuck finds inspiration in architecture, 3-D art, and travel. He has experienced moments of profound inspiration at ancient architectural sites around the world, including Machu Picchu and Angkor Wat. 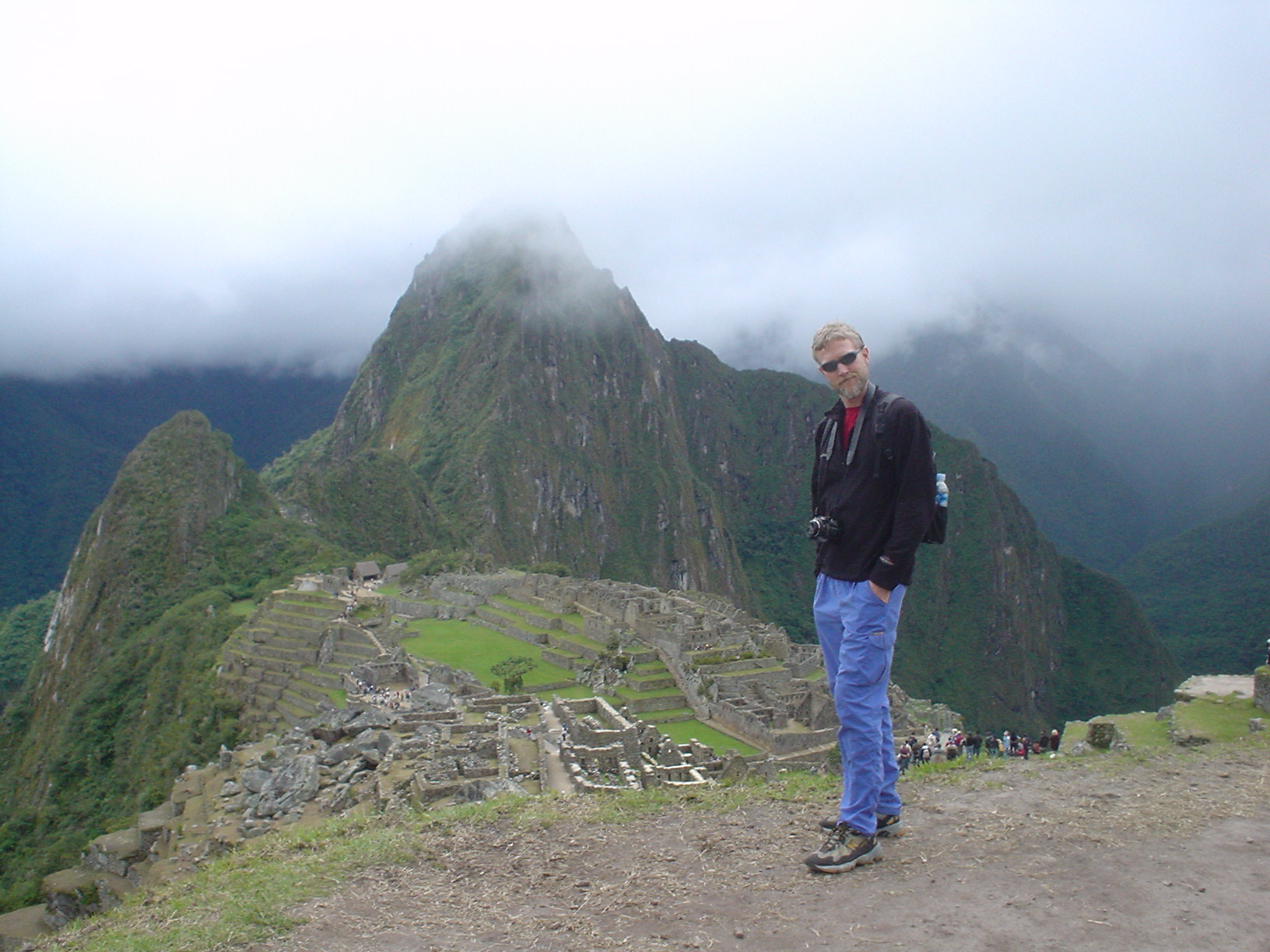 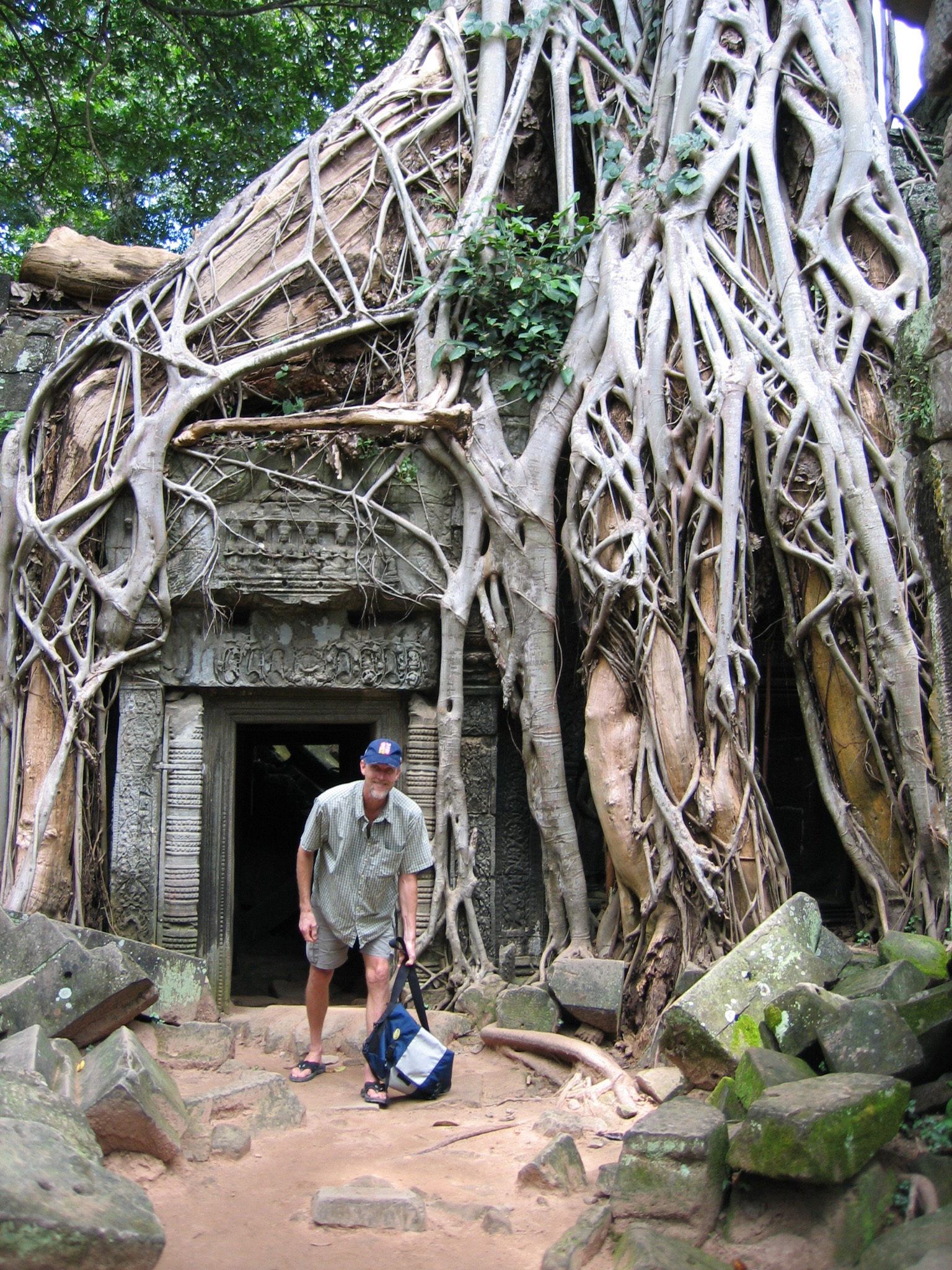 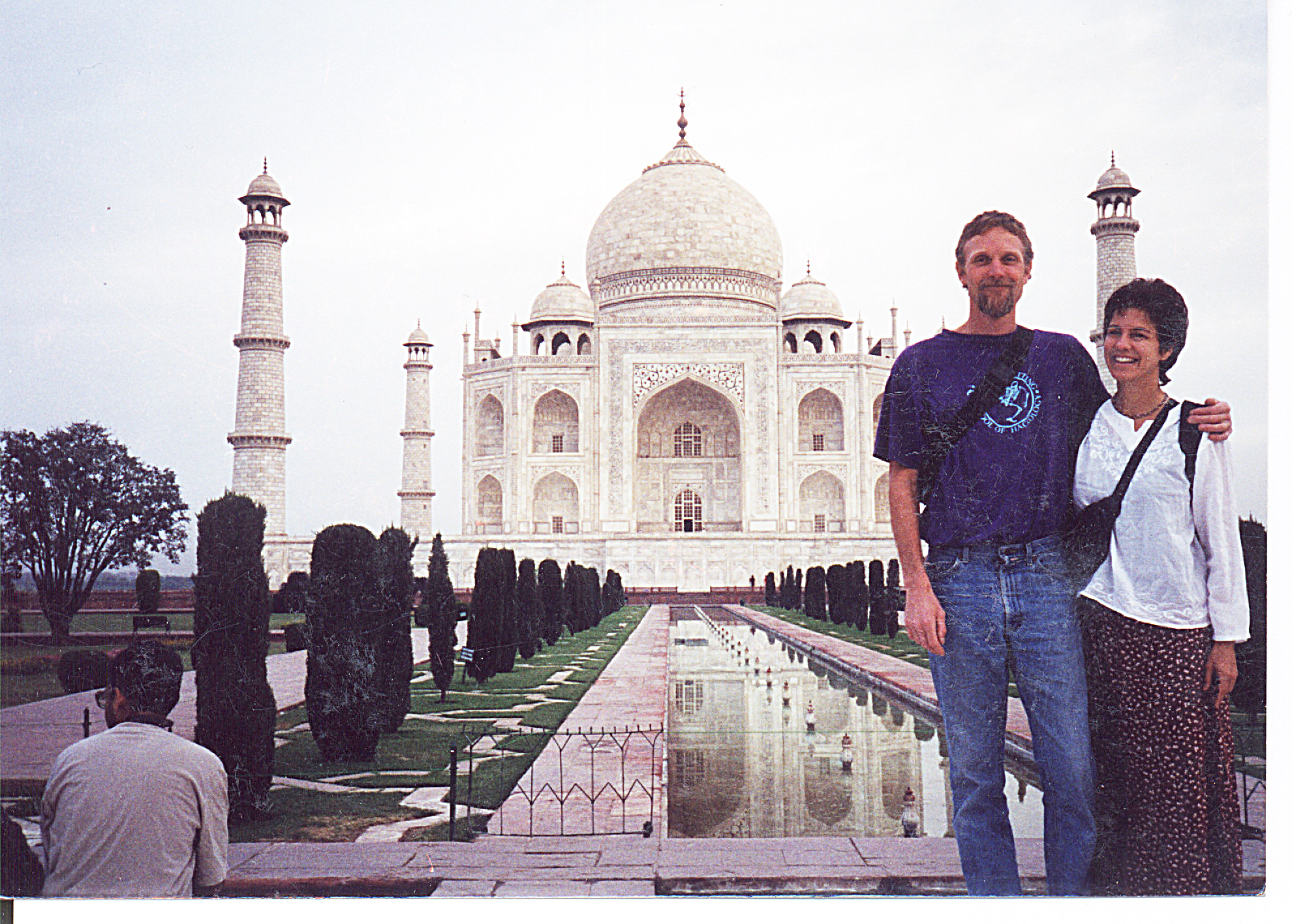 Chuck and his partner, Teri at the Taj Mahal.

WHAT IS ONE PLACE THAT MAKES CHUCK HAPPY?

At Out ‘n’ About in Oregon, treehouse builder Michael Garnier has an exhilarating swing. The Garnier swing experience is more akin to flying than conventional swinging, and induces equal parts terror and ecstasy. Chuck always feels incredibly happy when he’s flying on the Garnier swing. 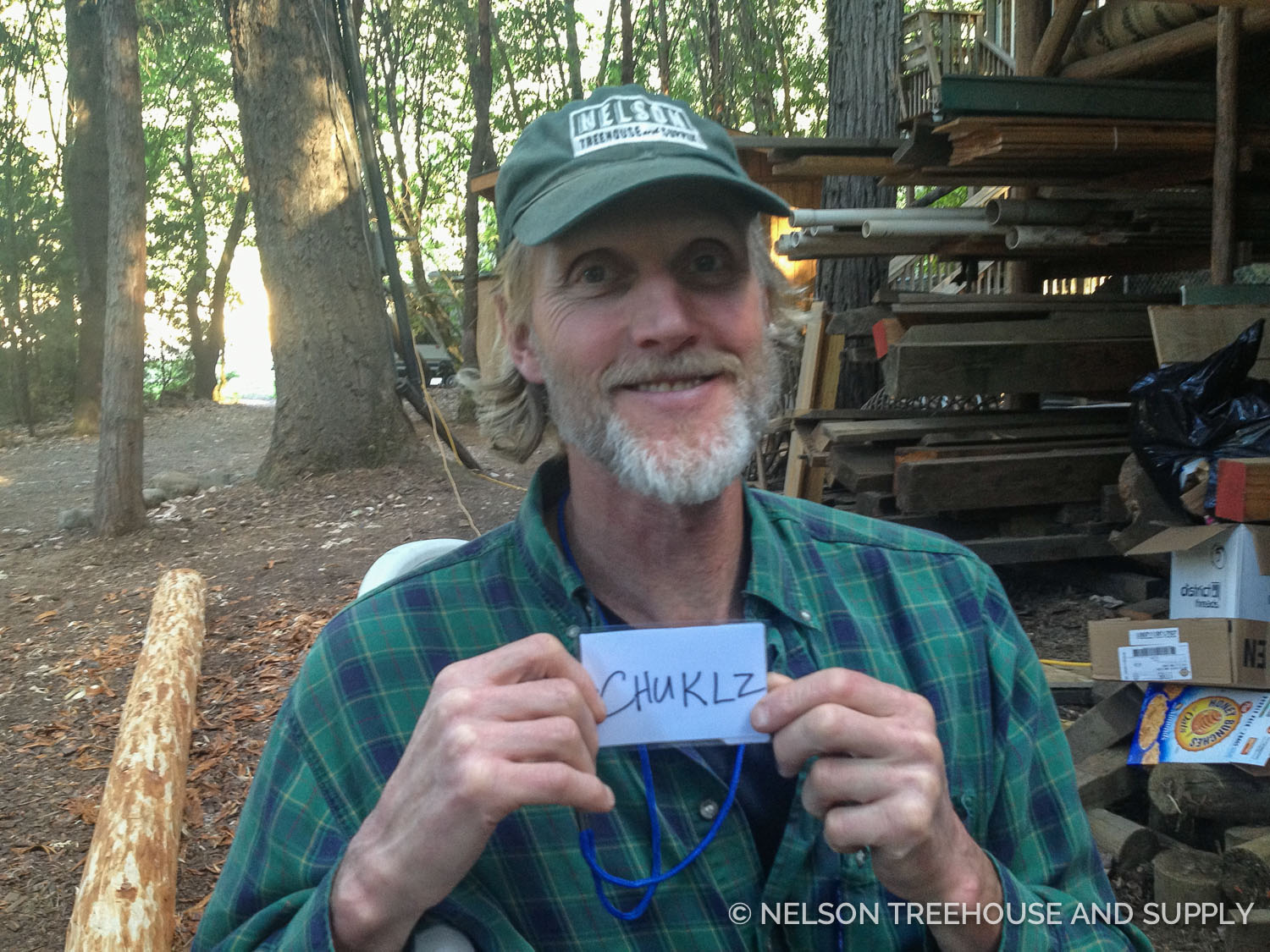 Thanks for sharing your incredible story, Chuck!

We hope you’ve enjoyed this Staff Spotlight on Chuck! Stay tuned for next month’s Spotlight on Toby Maloy. Make sure to follow us on social media and subscribe to our mailing list to be the first to find out when we have new Staff Spotlights!