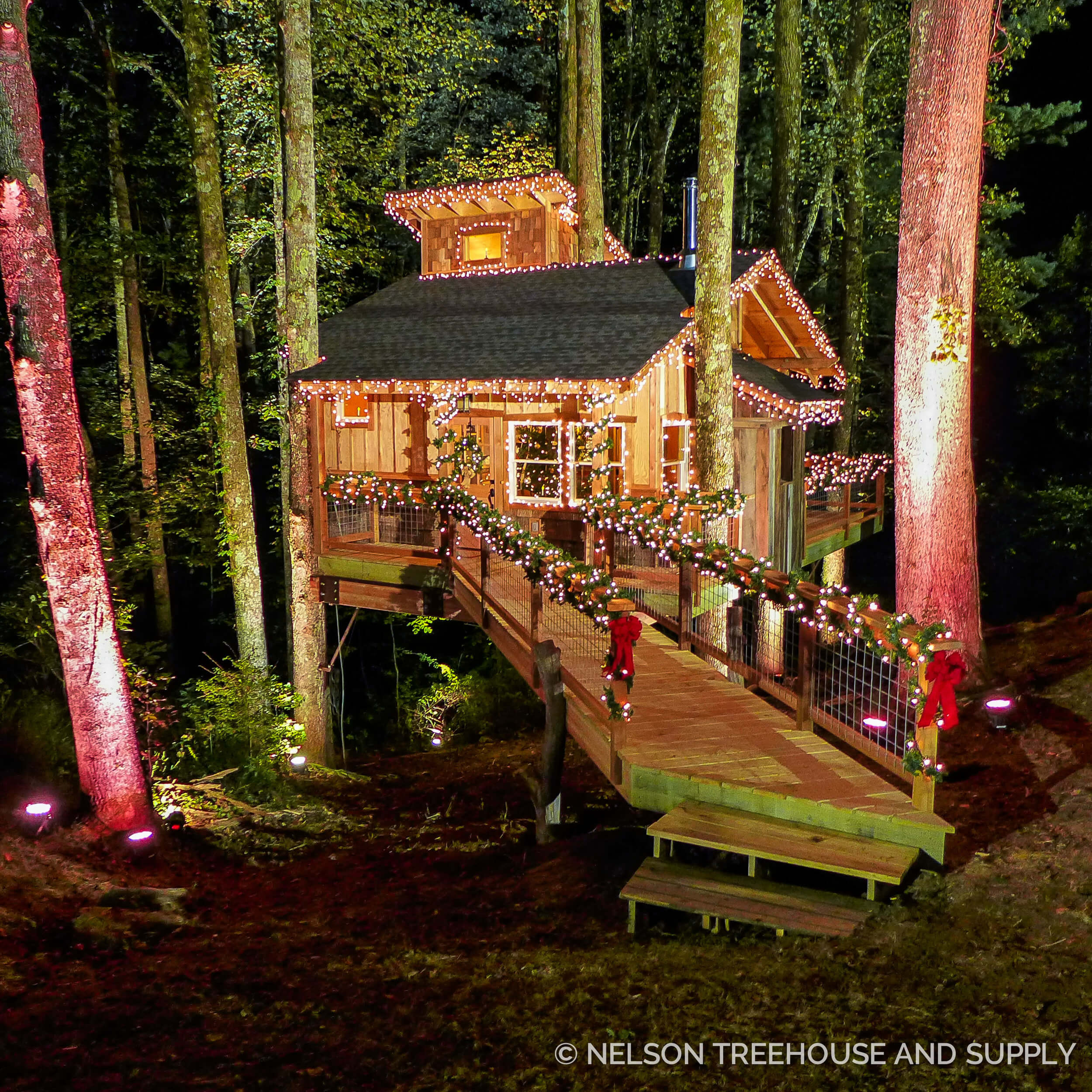 Did you catch the special holiday episode of Treehouse Masters? We loved watching Mike Reynold’s treehouse come to life on his wooded property in North Carolina! Read on for photos and details from the build! 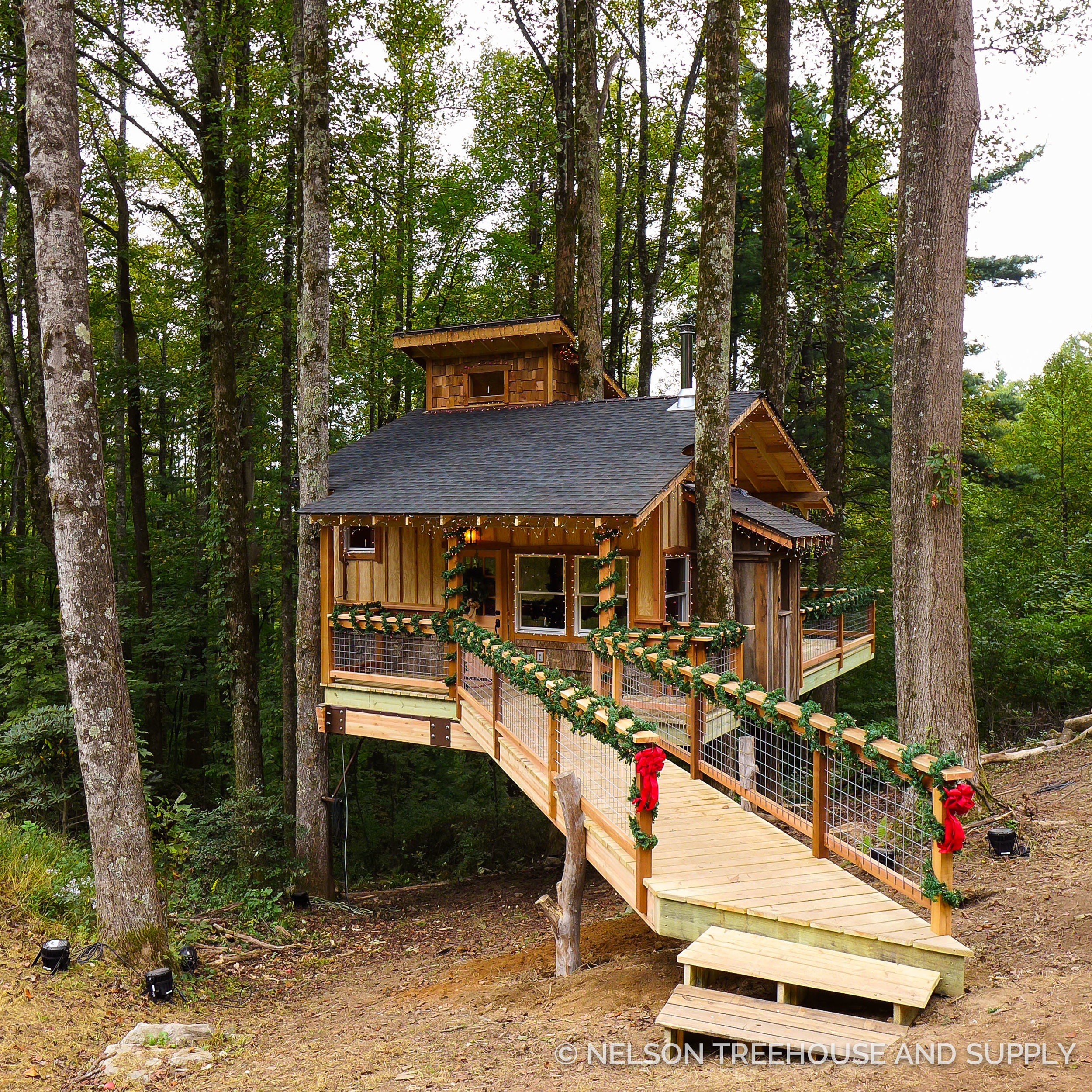 Building a treehouse for Mike, one of our very own crew members, was the cherry on top of a happy year for Nelson Treehouse and Supply. Mike is a talented carpenter and treehouse enthusiast, and had longed dreamed of building a treehouse near his home. Since Mike and the NTS crew built this treehouse in the lead-up to the holidays, they decided to infuse it with the spirit of a local tradition called, “Breakin’ up Christmas.” This old Appalachian tradition involves twelve days of communal dancing, music, and festivities around Christmastime, and resonates with the playful and unifying ethos of treehouses.

The decision to build Mike’s treehouse was made spontaneously, and the crew departed for the build site without any completed designs. Mike and Alex Meyer collaborated on the design en route to the build site, and began construction without the support of in-shop prefabrication. In a remarkable demonstration of skill, hard work, and insomnia, Mike and the crew built the treehouse 100 percent onsite within 13 days, start to finish. To complete his treehouse in such a short period of time, Mike called in favors from friends and relied on reclaimed materials, including chestnut and oak wood from the floor joists of a nearby barn. The finished treehouse is a product of collaboration, tradition, and ingenuity.

Mike’s treehouse looks at home in the forest, clad in poplar bark siding and nestled 18 feet up in a grove of tulipifera, or tulip poplar trees. With a kitchen, outdoor shower, compostable toilet, bedroom loft, living space, toasty wood stove, and dual decks, this “treehome” makes for a cozy retreat. 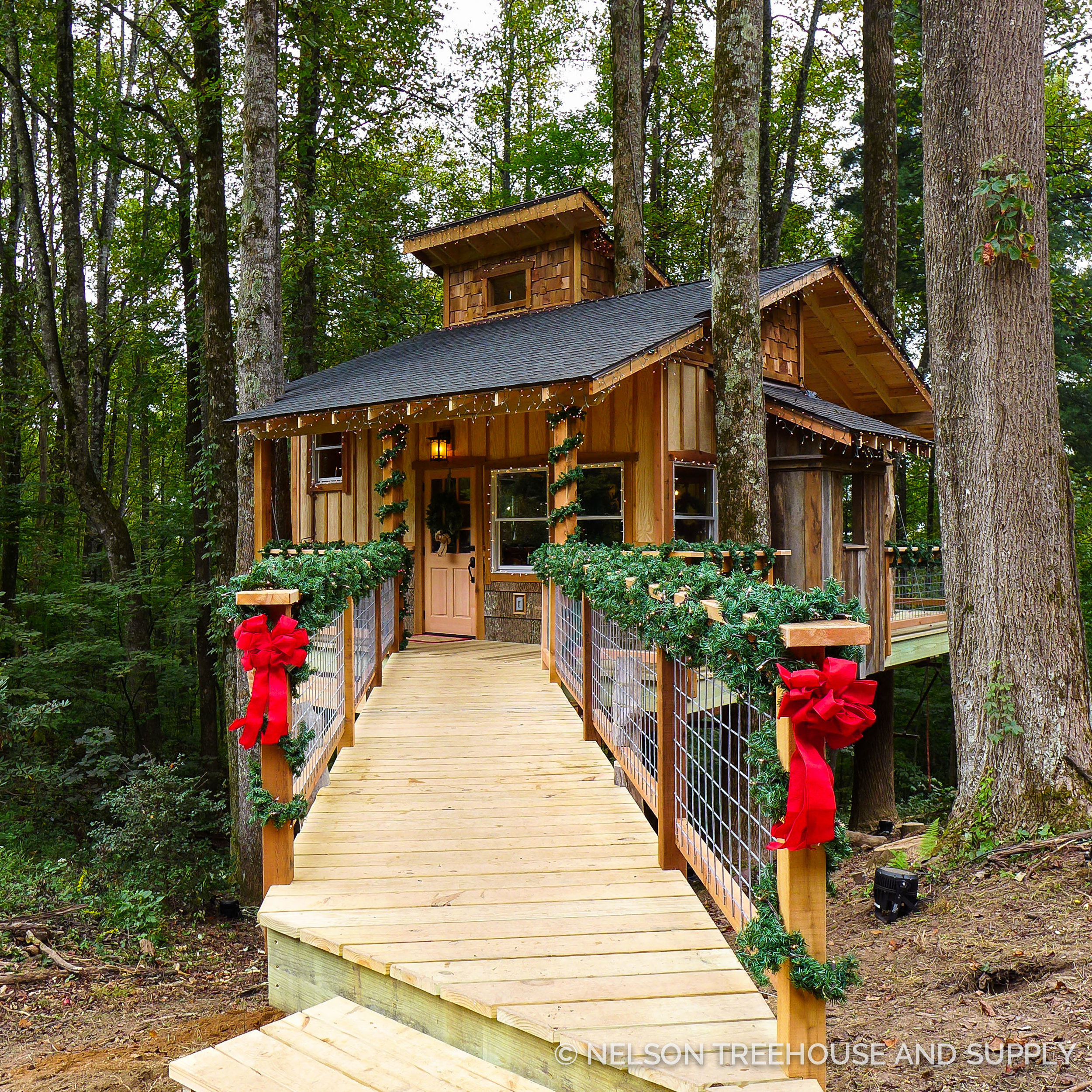 The ramp made for a convenient passage to the treehouse, given the slope of the hill. Classic Nelson Treehouse hog wire railing runs along either side of the ramp. 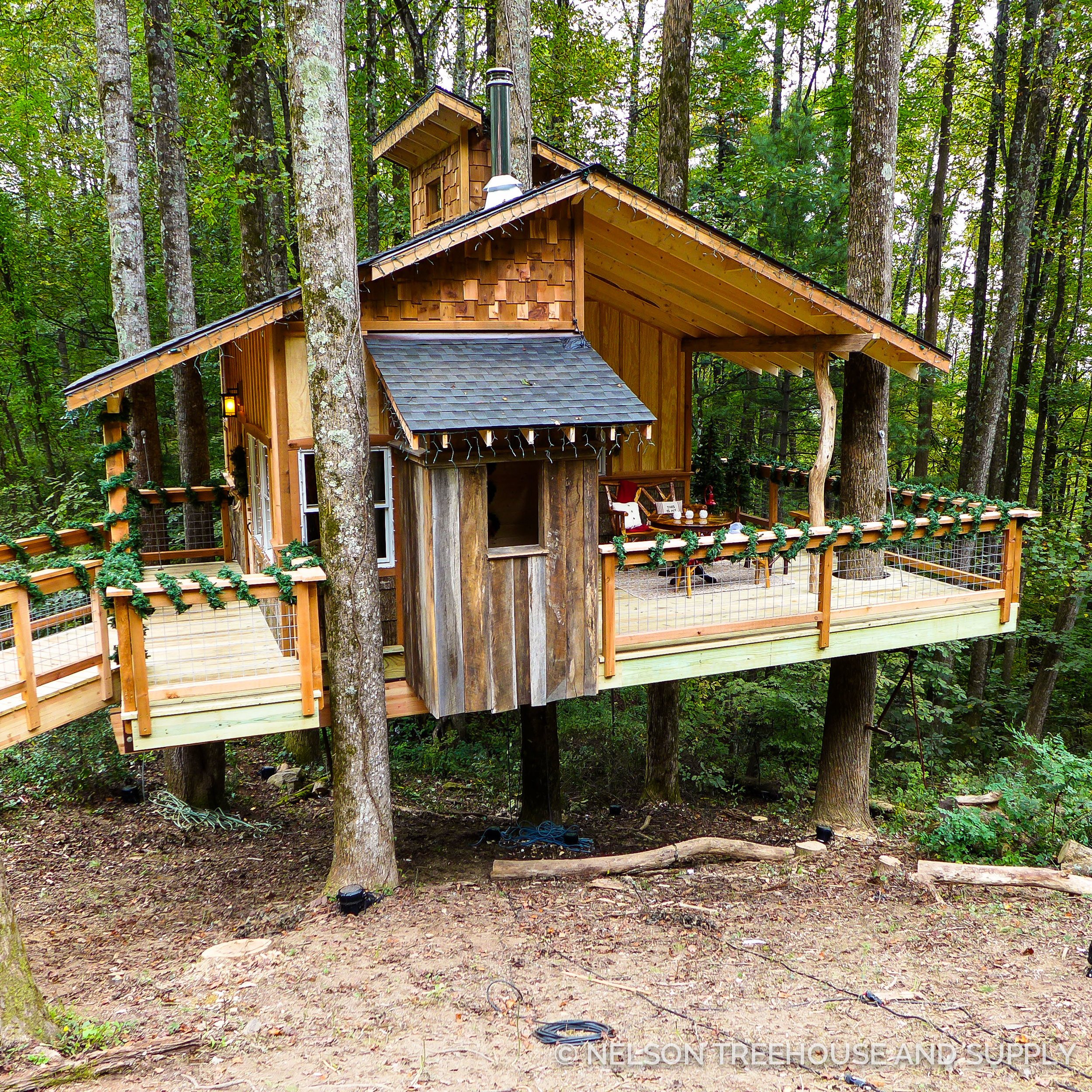 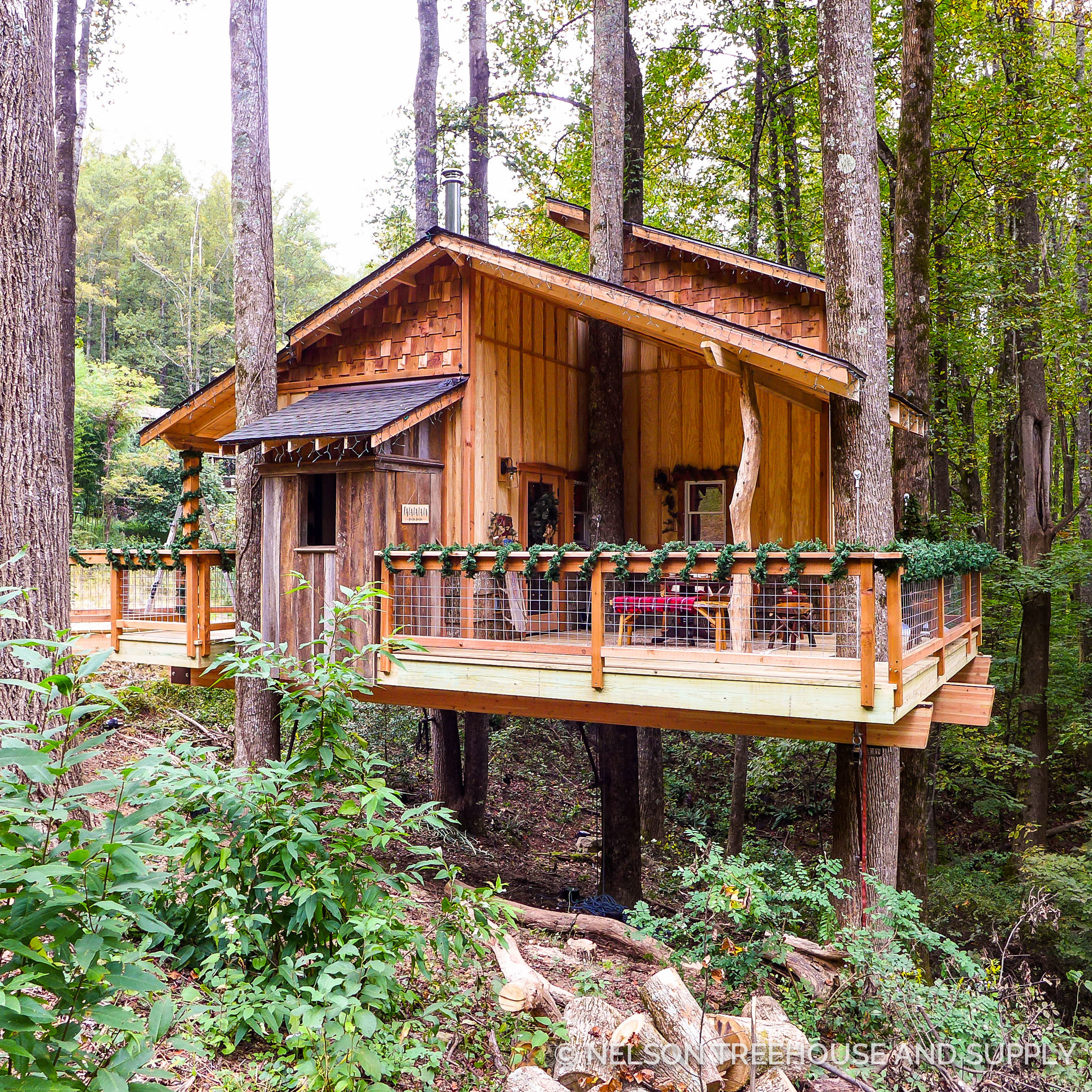 Two decks provide ample outdoor space. Mike’s favorite part of the treehouse is the back deck; he loves sitting outdoors and taking in the forest. 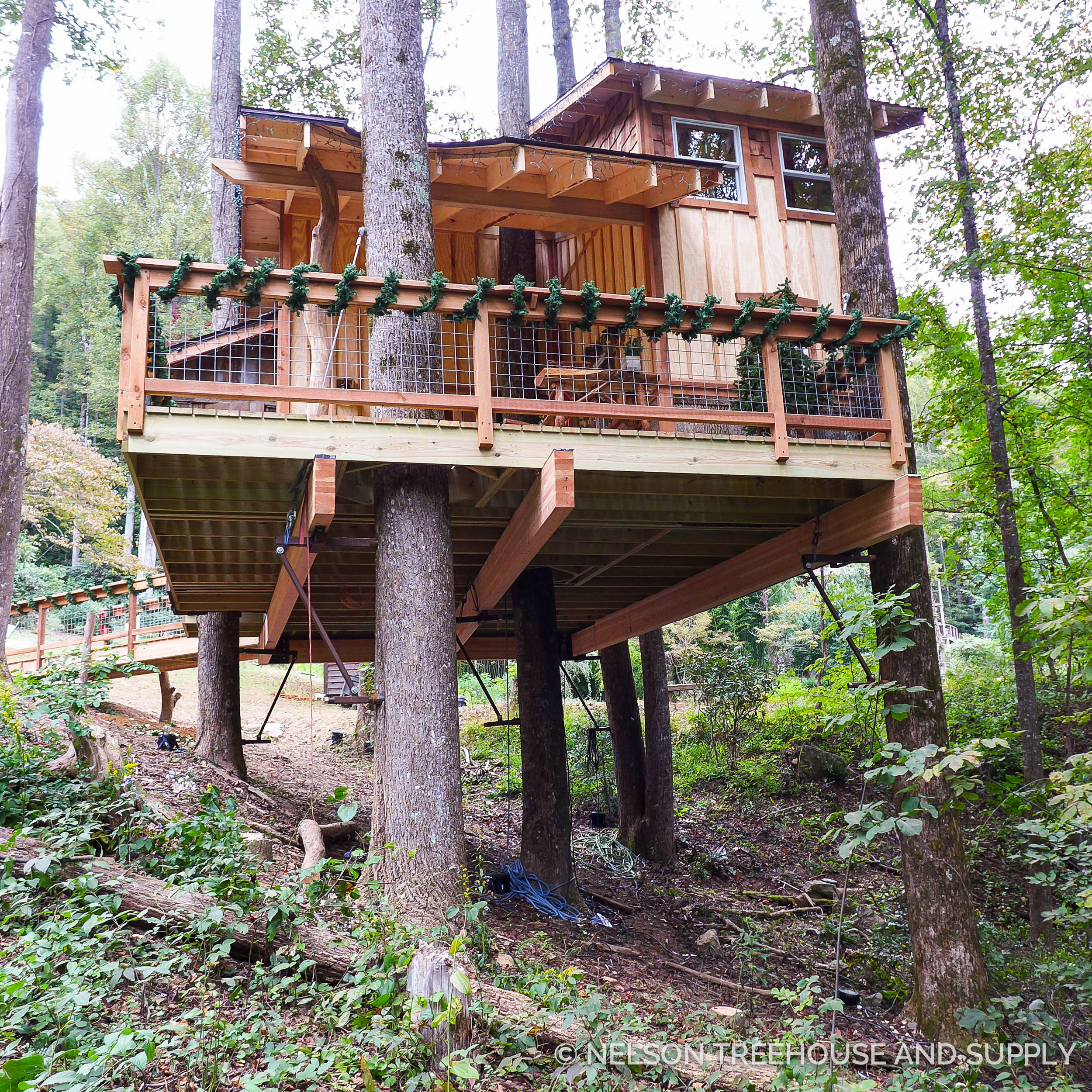 A grove of strong tulip poplars supports the weight of Mike’s treehouse, which sits 18 feet up from the ground at its highest end. 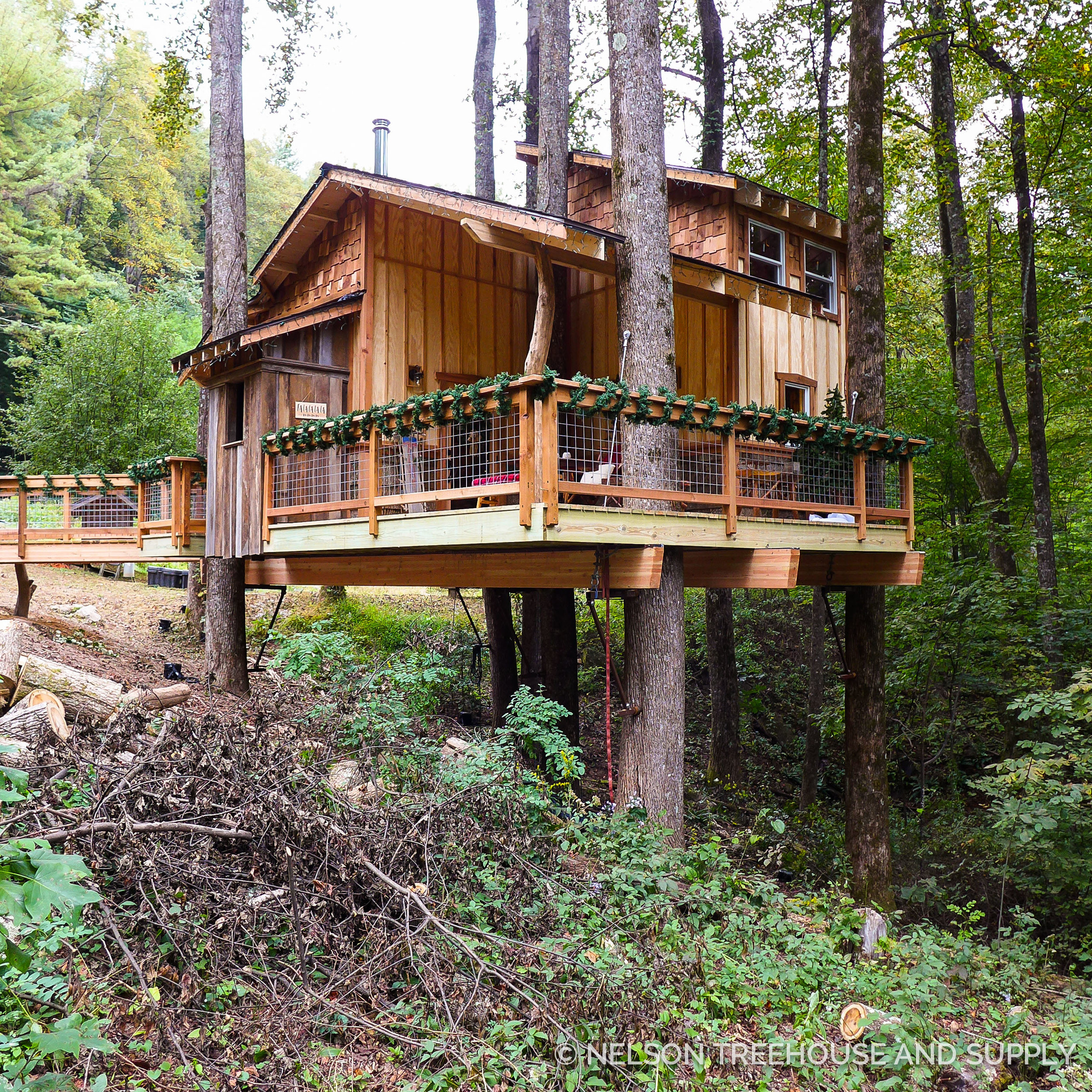 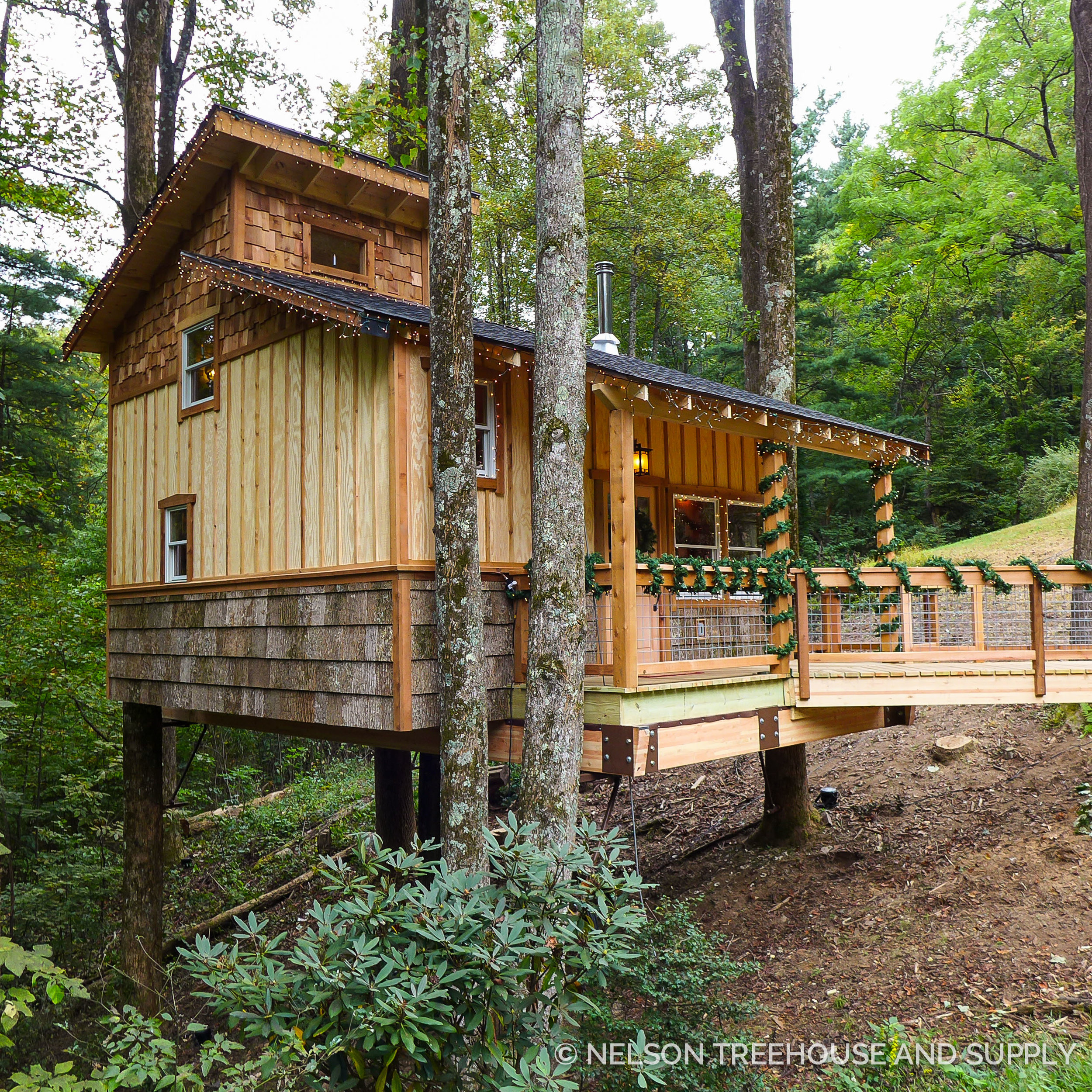 The bottom portion of the exterior is clad in poplar bark siding. Cedar board and batten covers the middle section, and cedar shakes pepper the top. 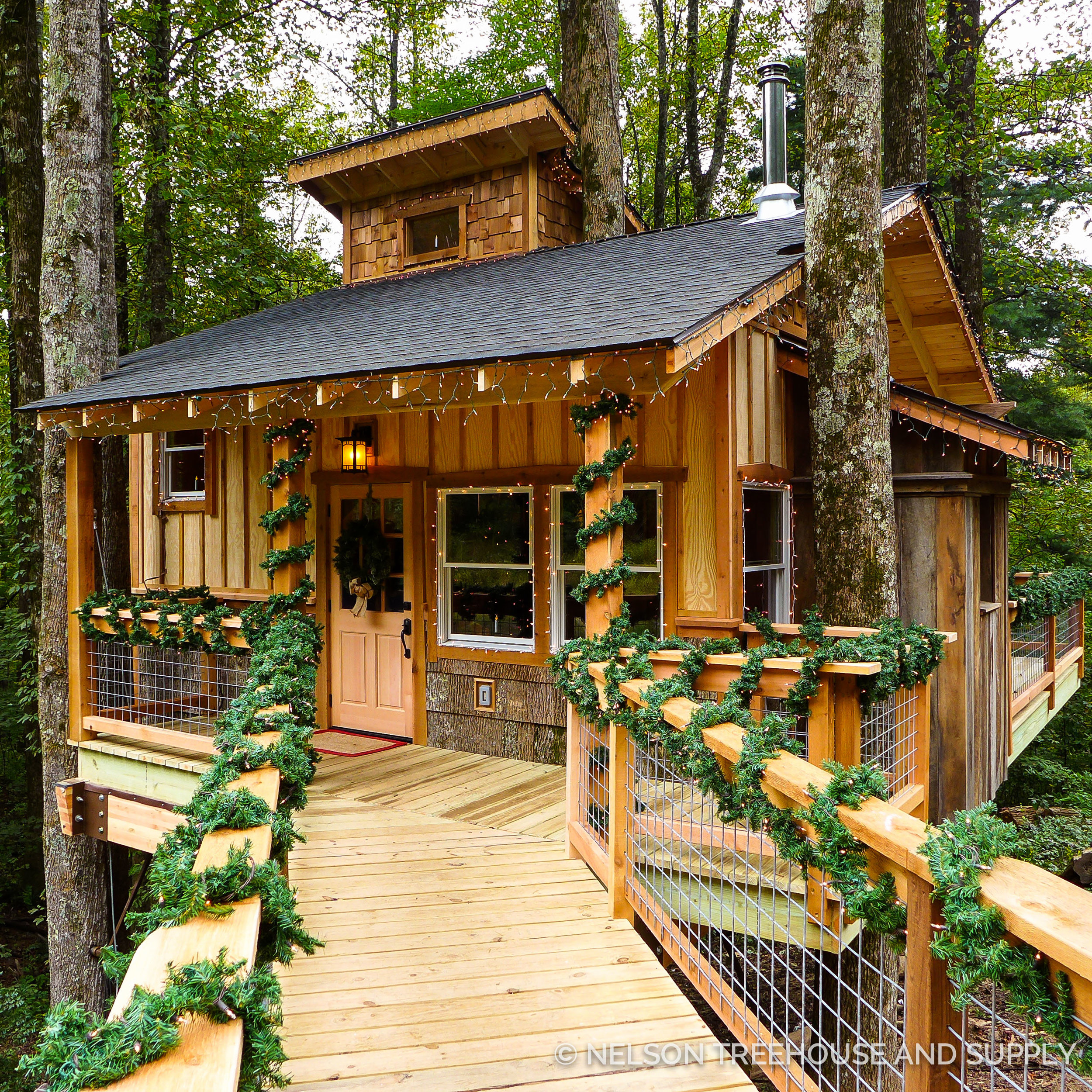 The front deck is sheltered by the roof’s overhang. 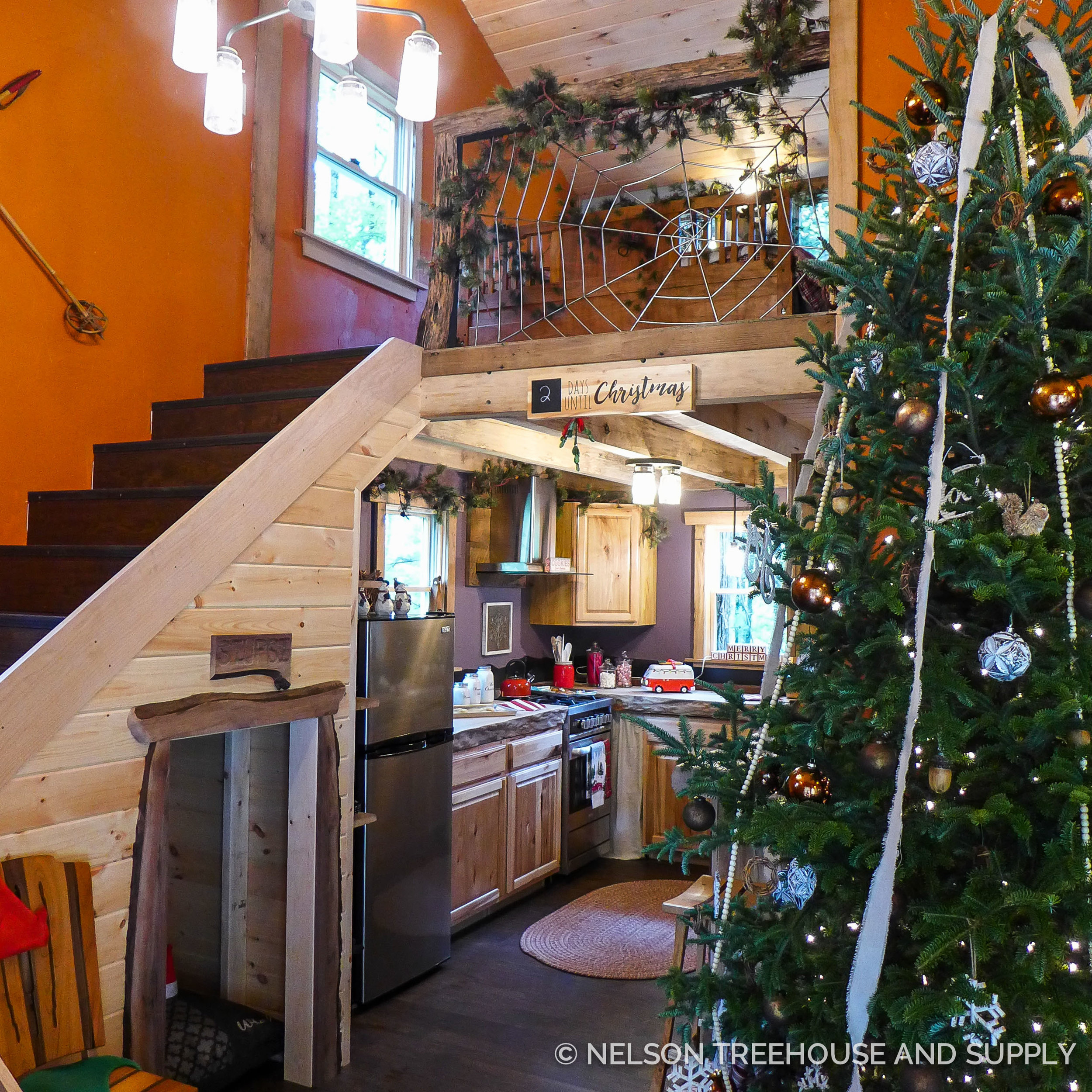 The interior of the treehouse contains a kitchen, dog nook, lofted bedroom, and living space. 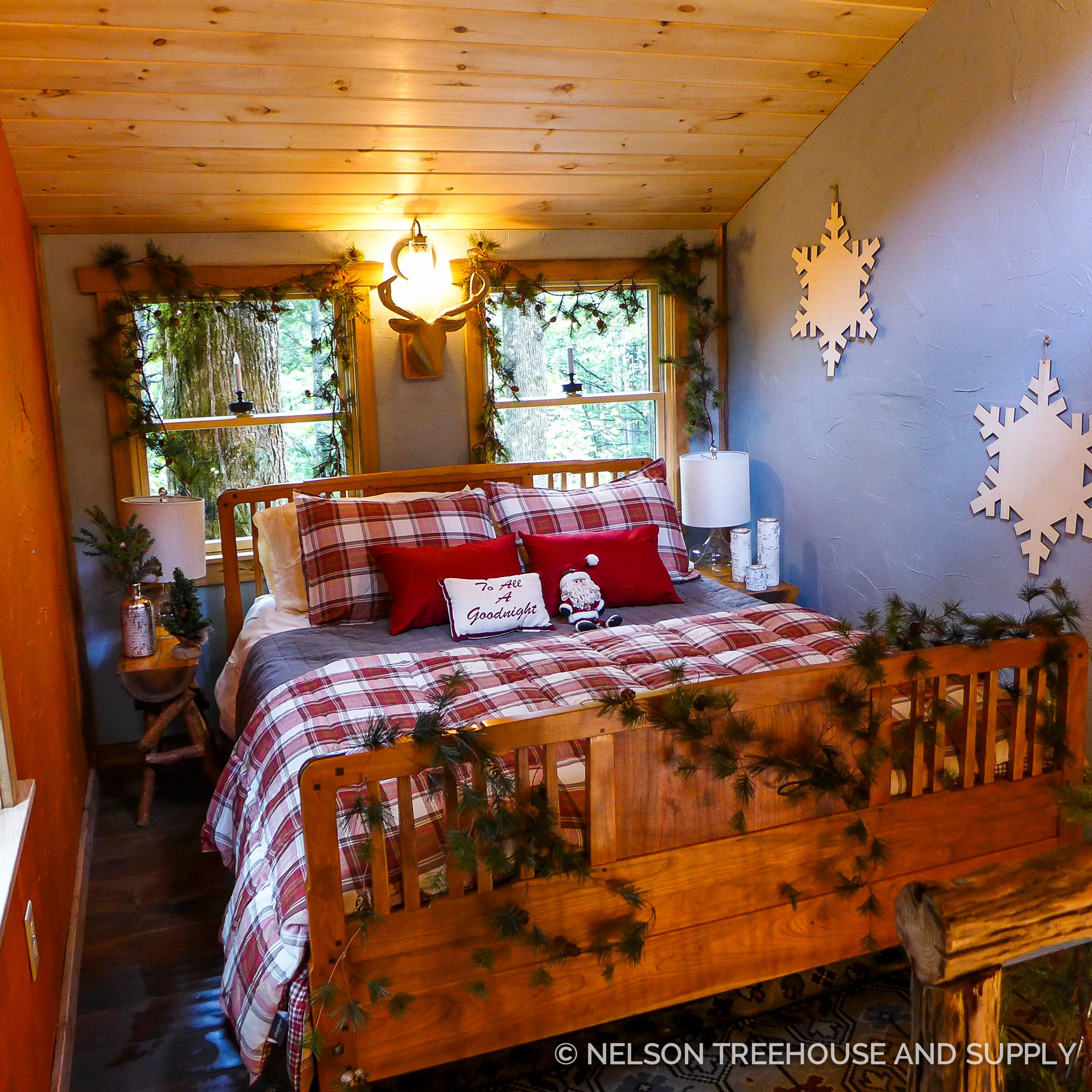 The loft fits a queen-sized bed. 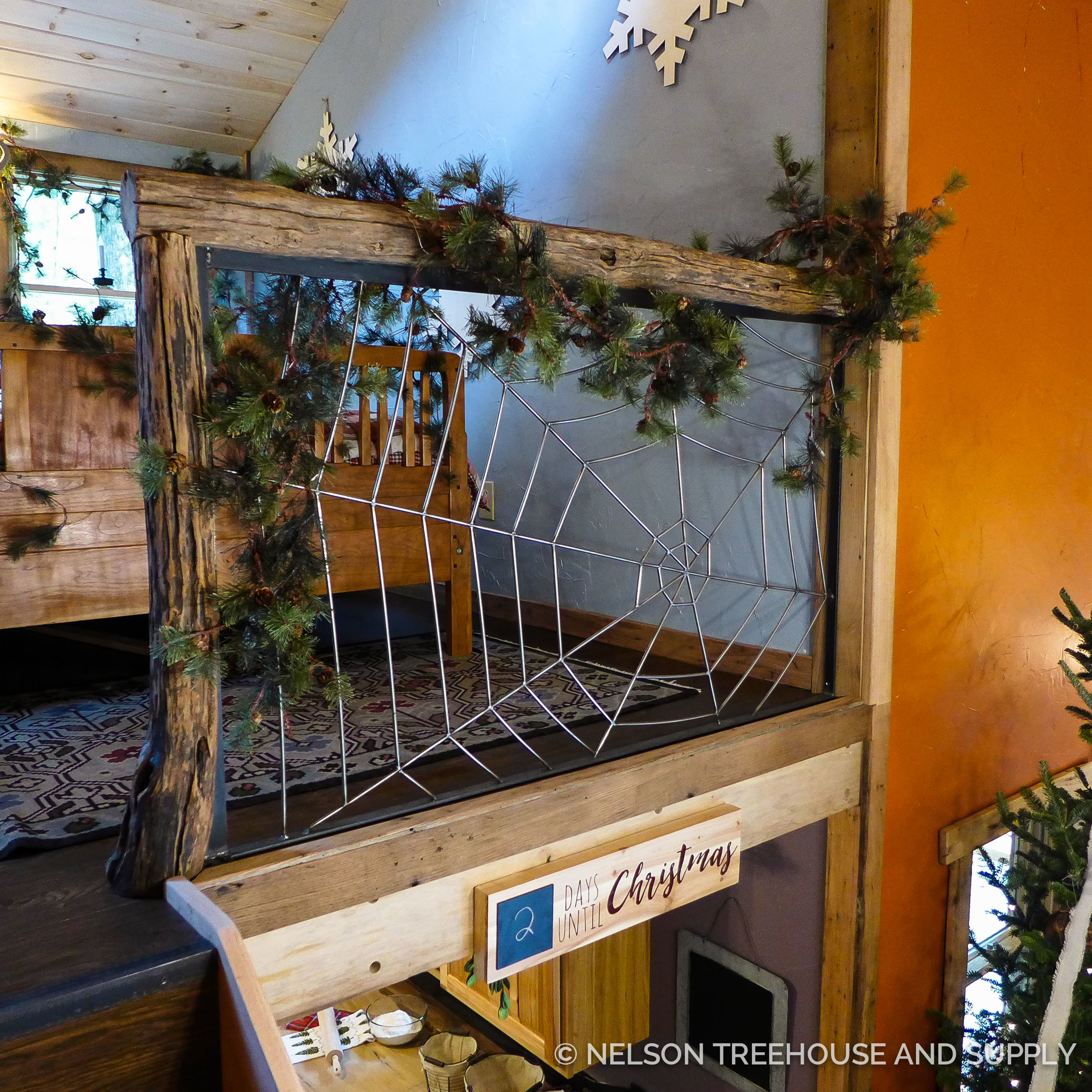 Mike’s friend fabricated this stunning railing; he was inspired by seeing dew drops on a spiderweb woven between posts of a split-rail fence. Mike’s friend incorporated fence posts into the railing to mimic the natural web he had spotted. 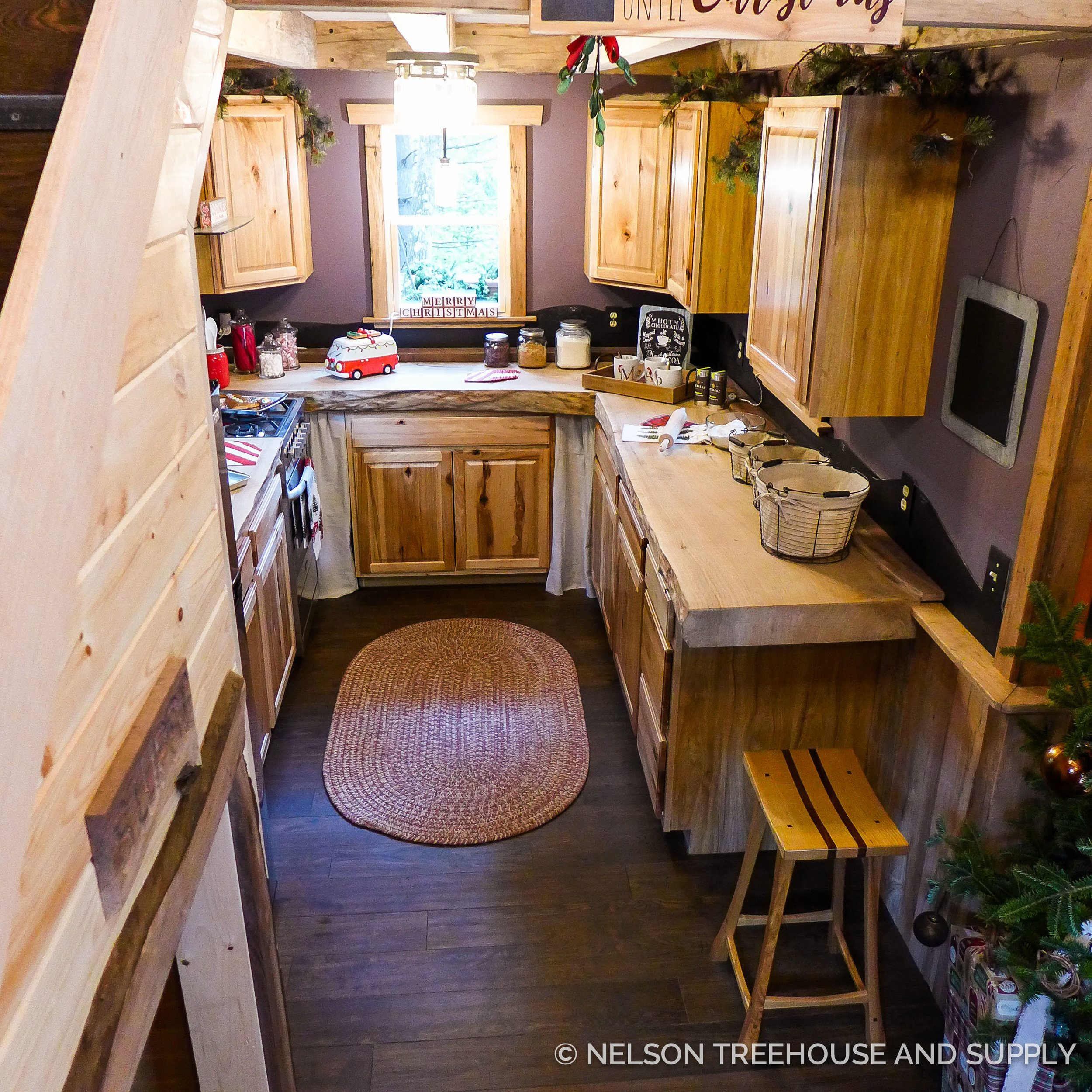 Mike’s friend also worked on the steel back splash that runs from the kitchen into the living room. 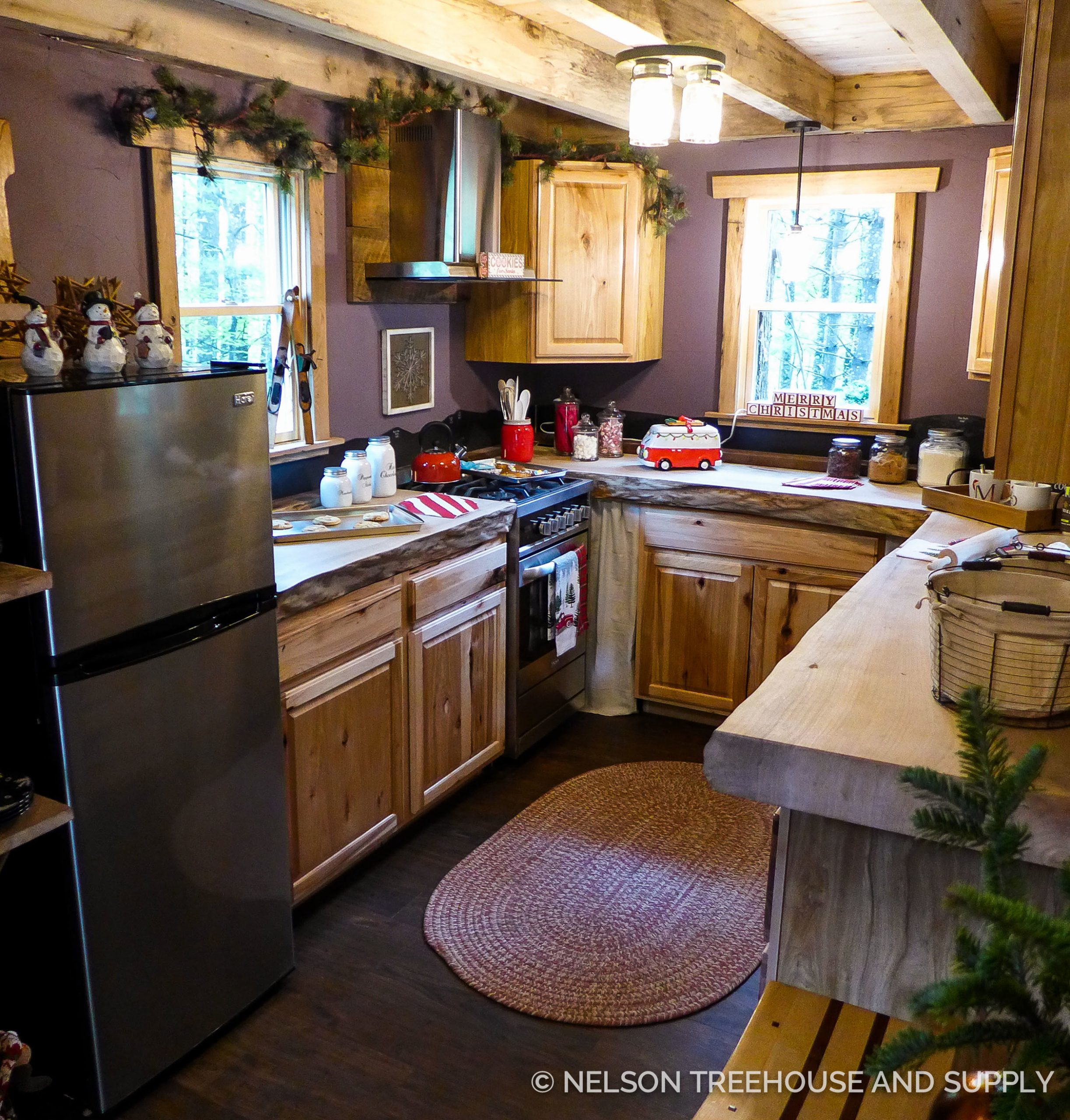 Much of the wood inside Mike’s treehouse is reclaimed, including chestnut and oak from old barn floor joists, and walnut that dates back to 1880! 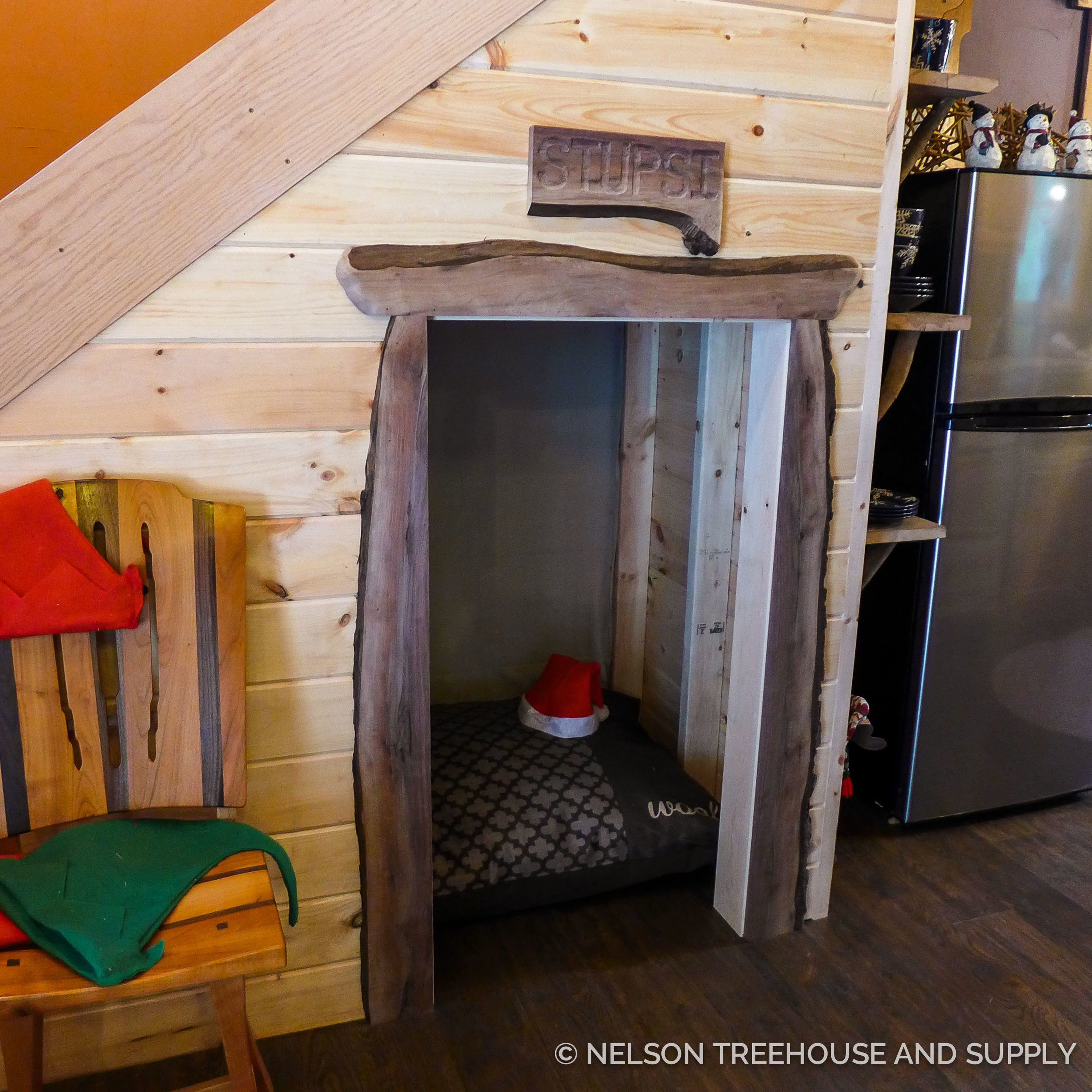 A sleeping nook for Mike’s dog, Stupse, is tucked beneath the stairs. 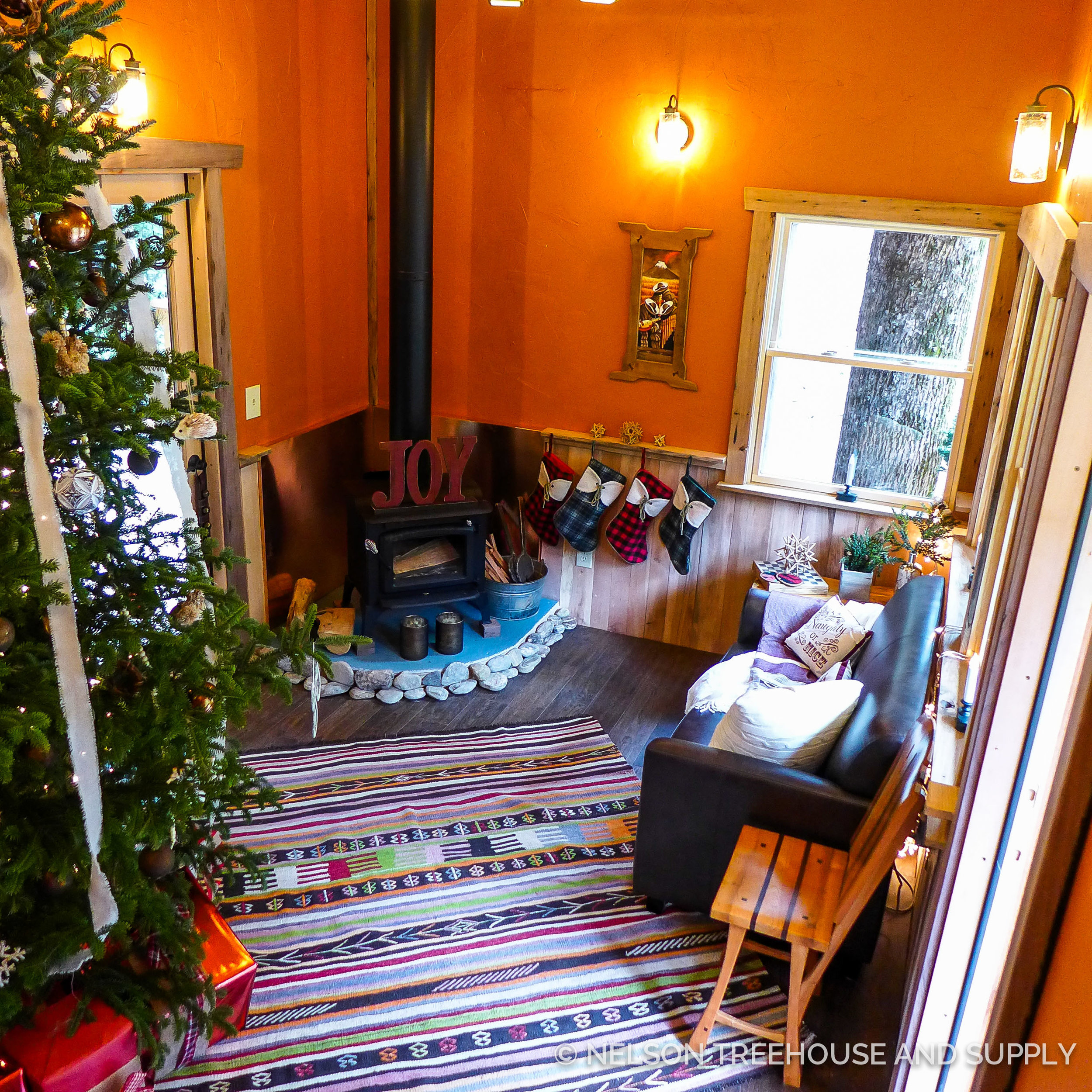 A wood stove keeps the living space warm and toasty. 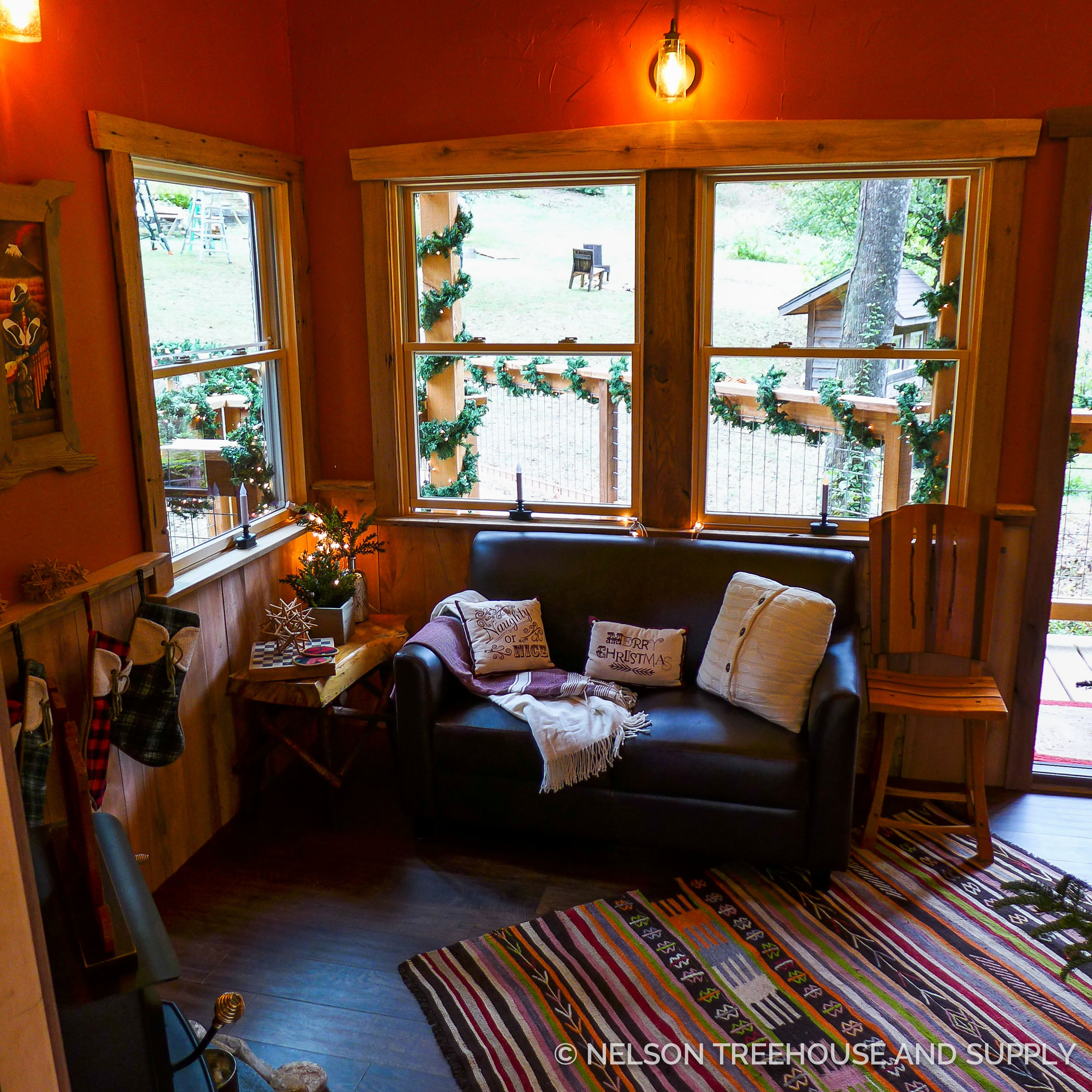 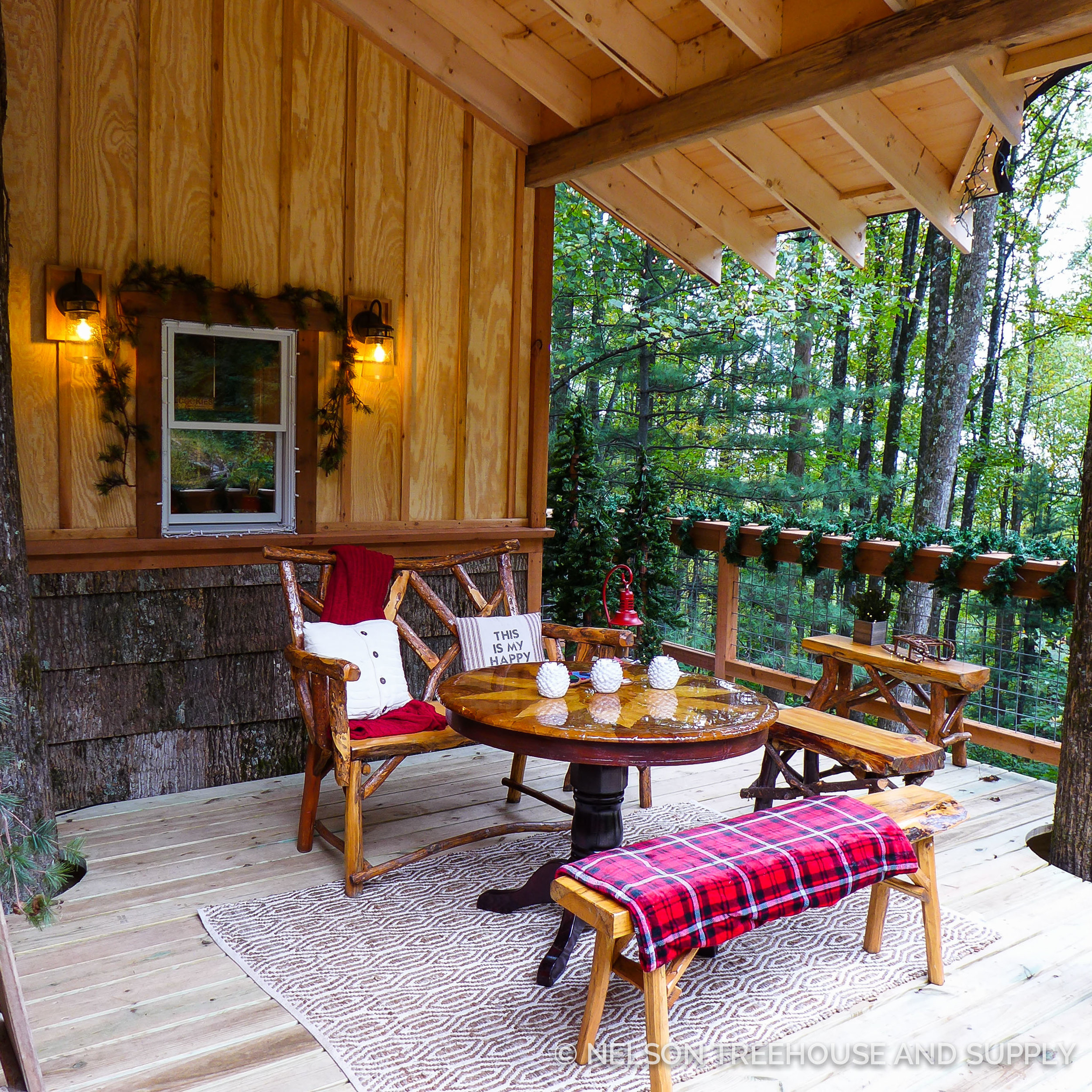 The back deck has plenty of room for an outdoor seating area. 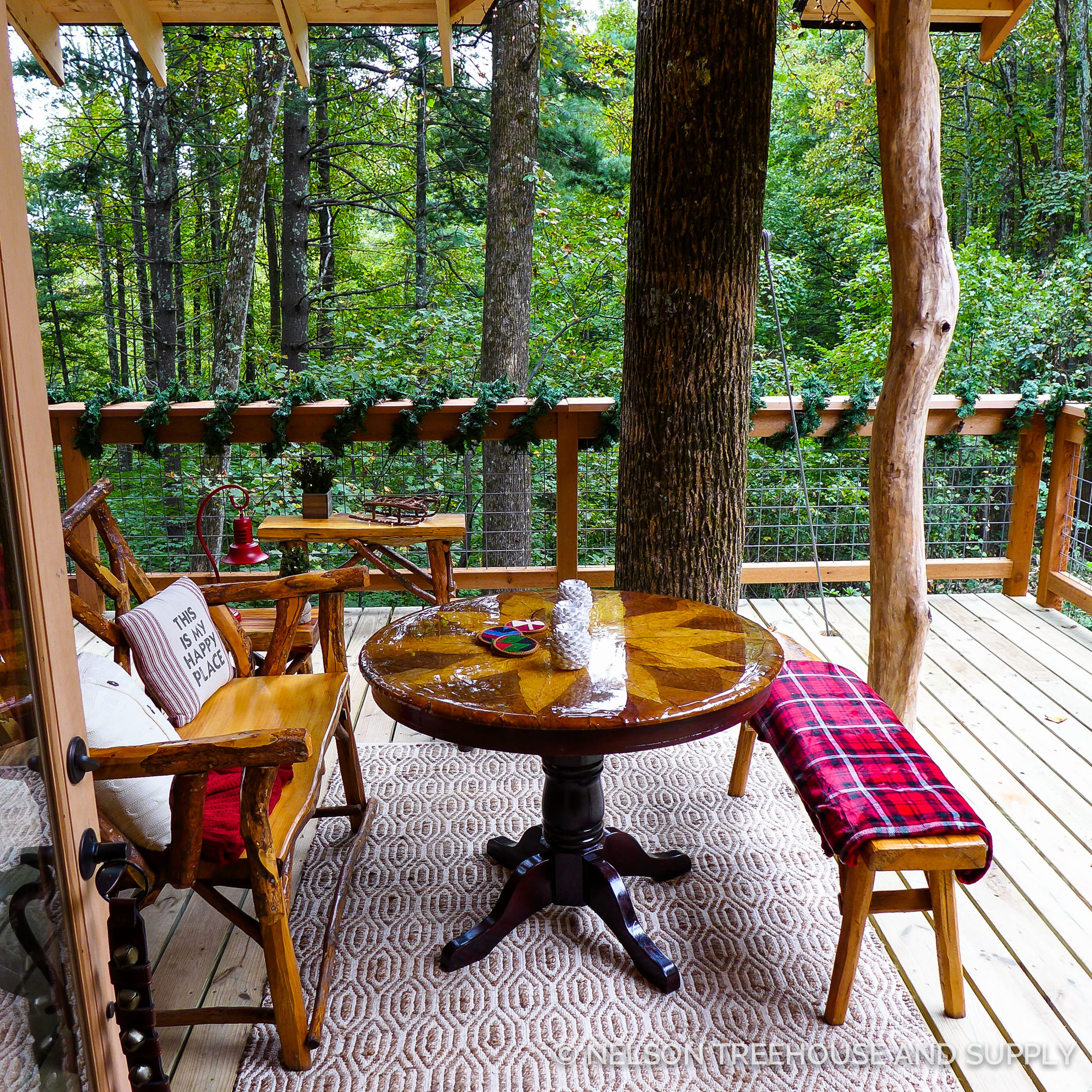 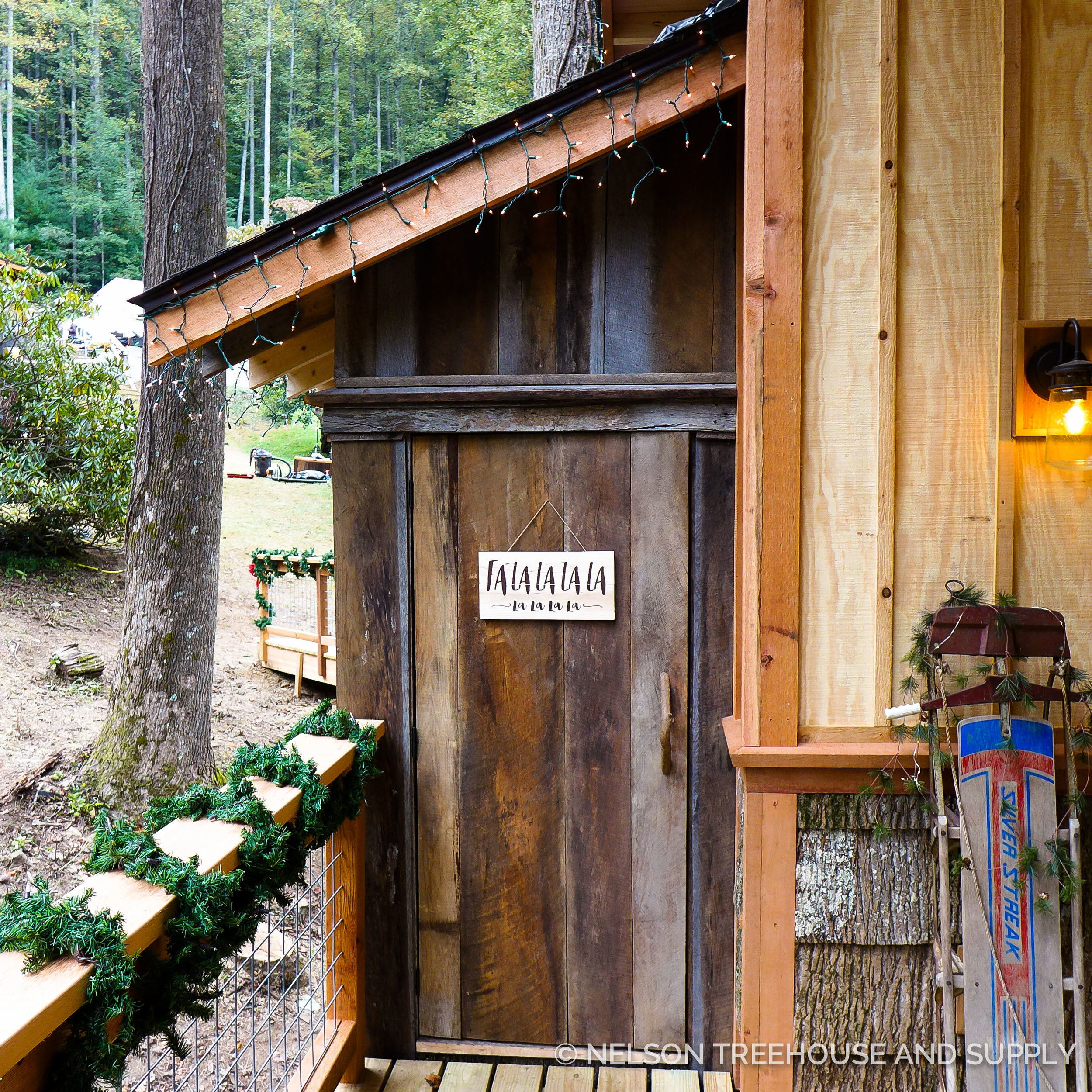 Mike’s treehouse includes an outhouse with a compostable toilet. 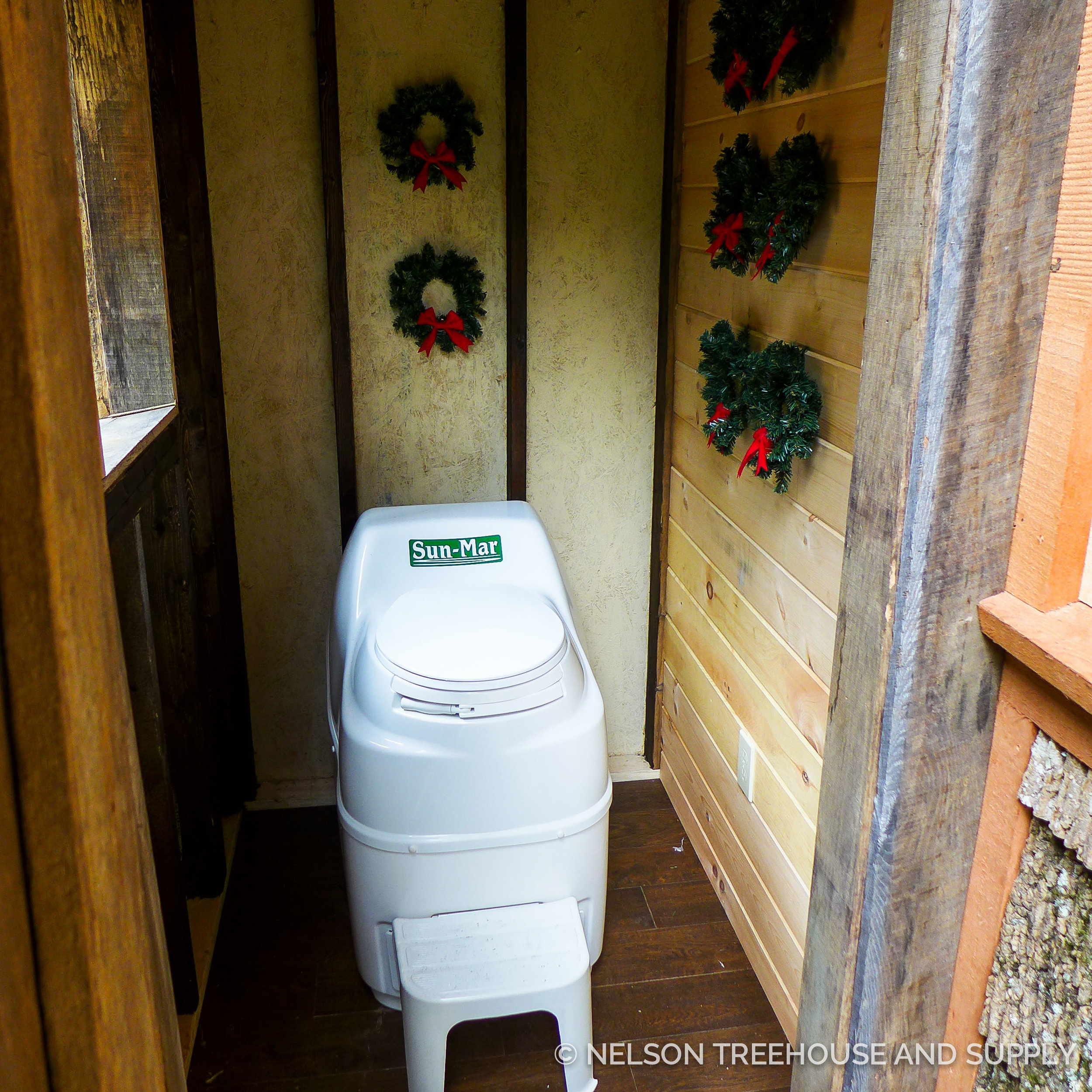 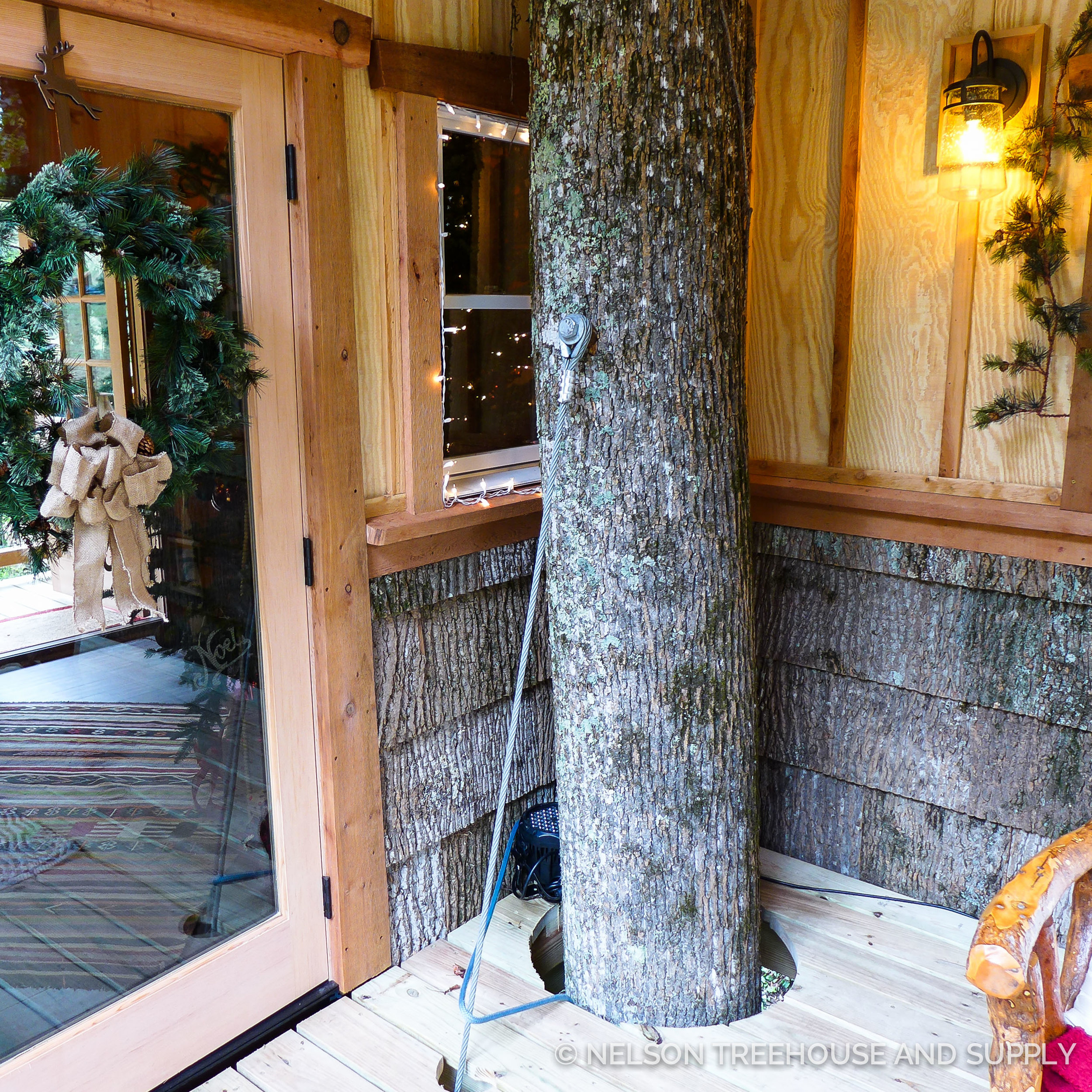 Several poplars poke through the deck, allowing visitors to admire their beauty up close. They also blend in nicely with the poplar bark siding. 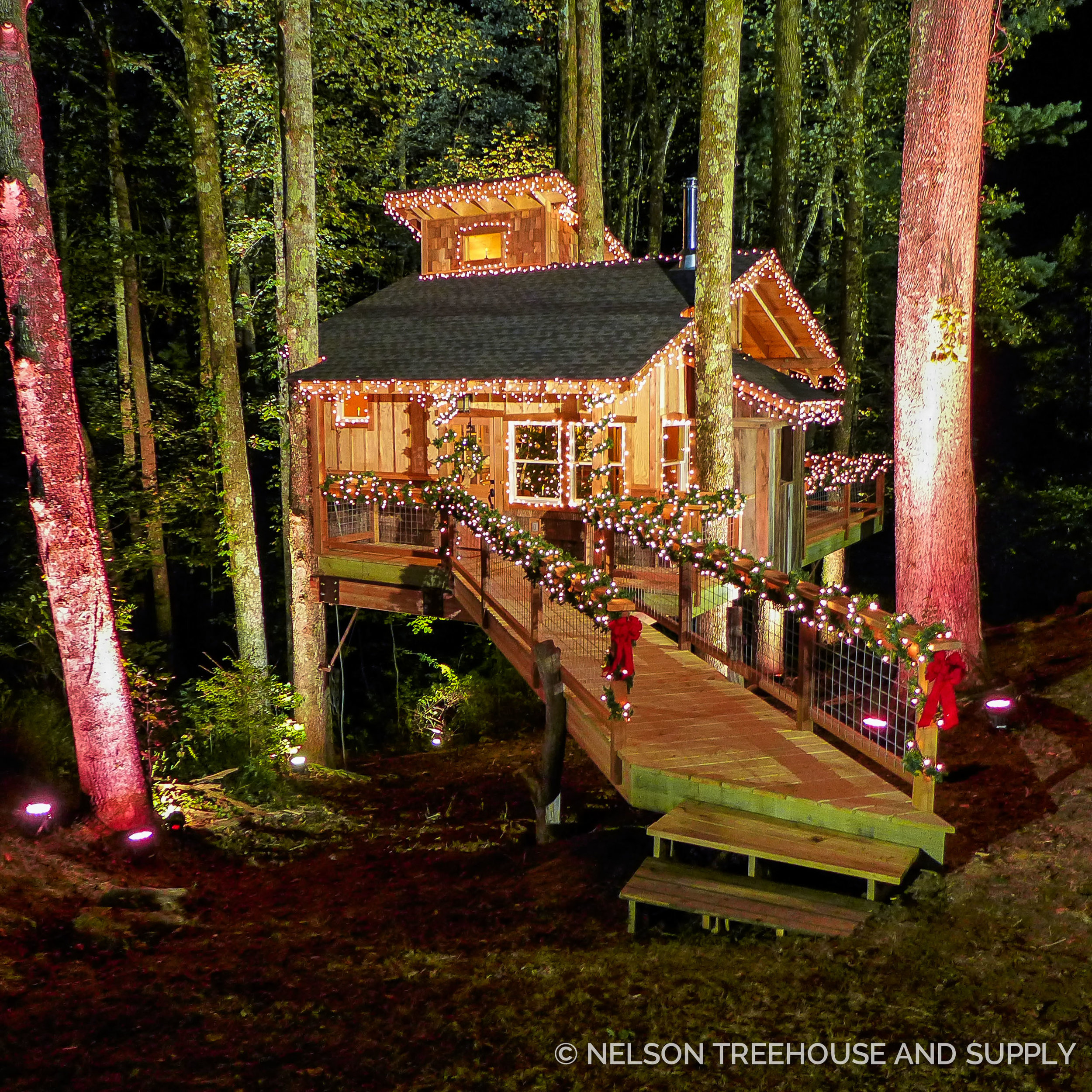 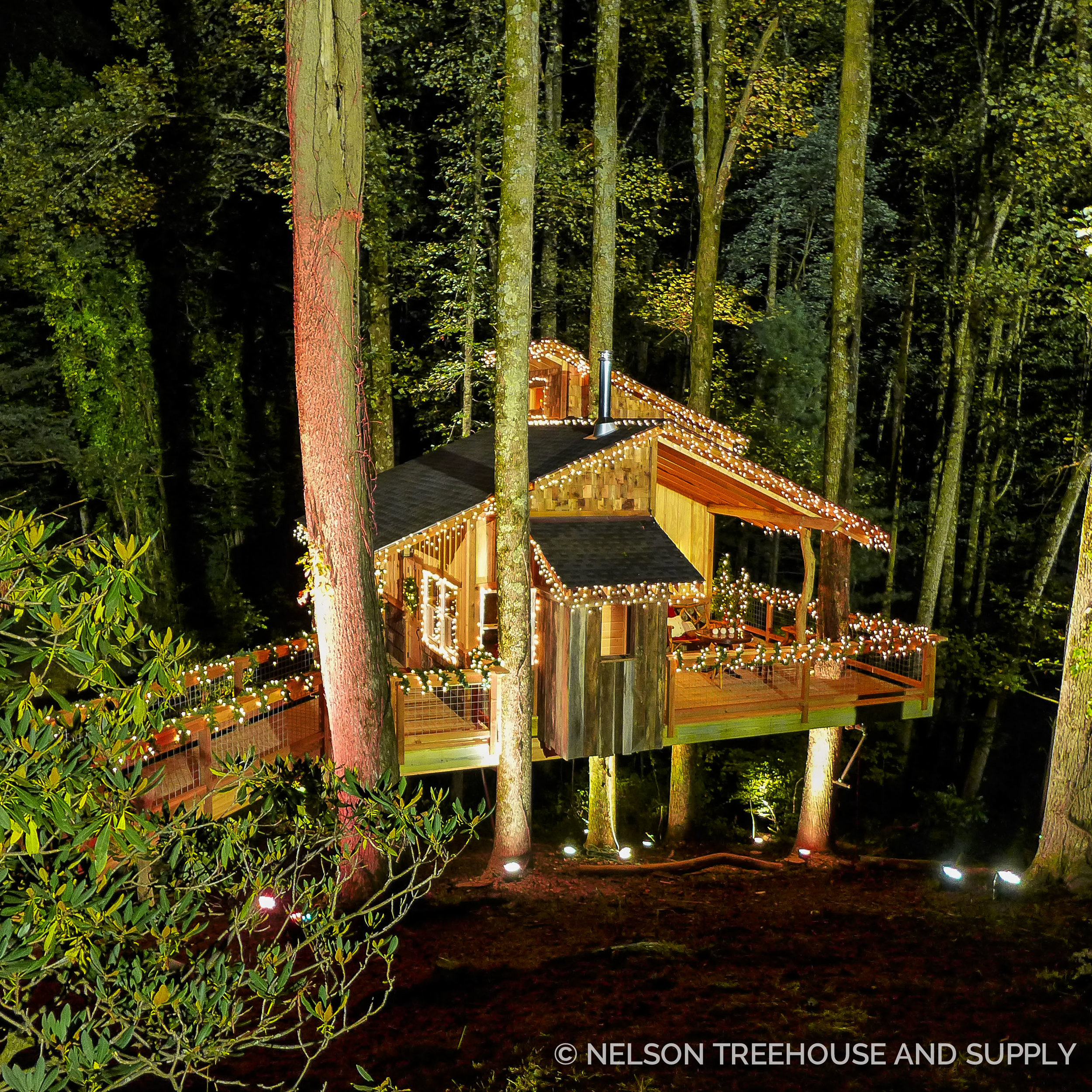 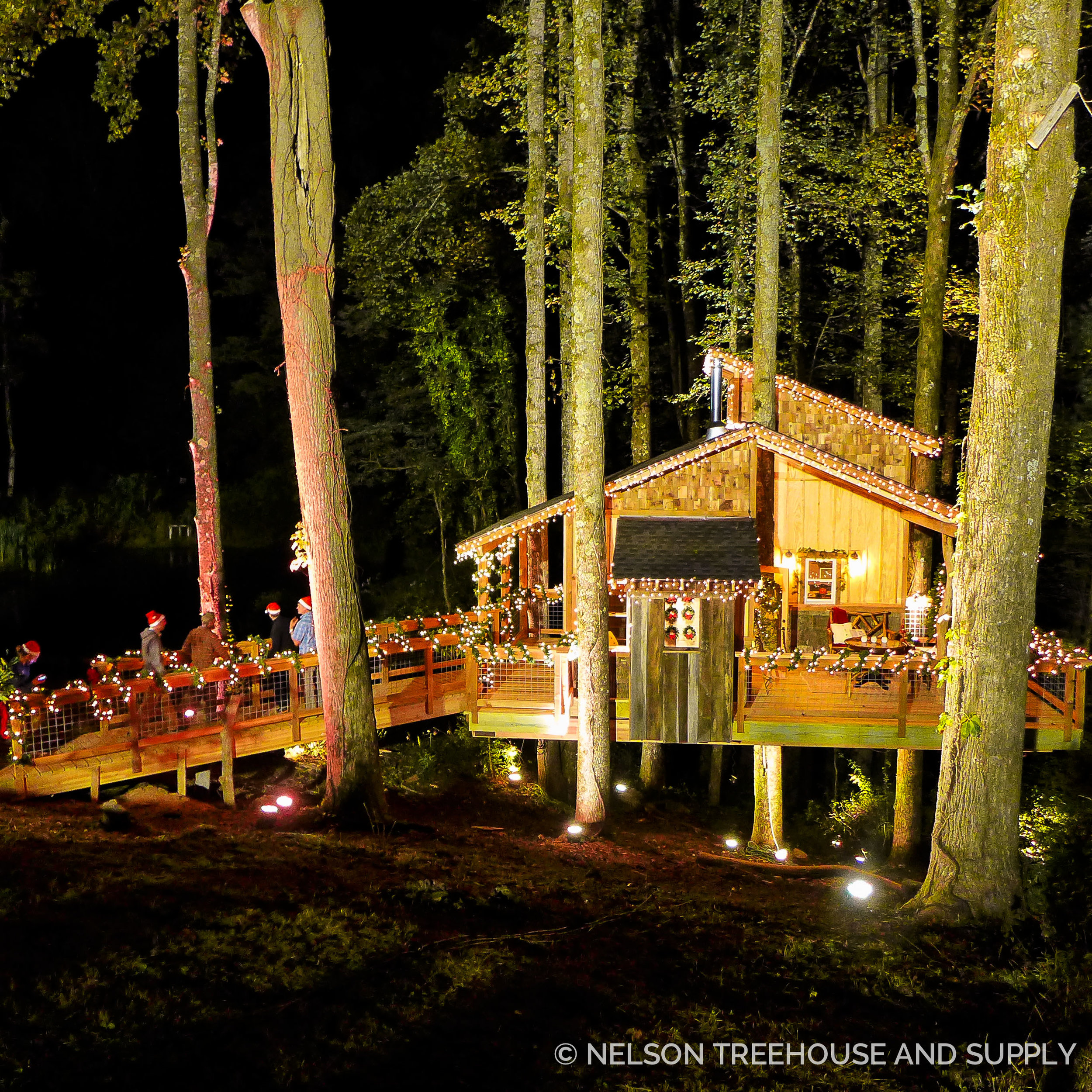 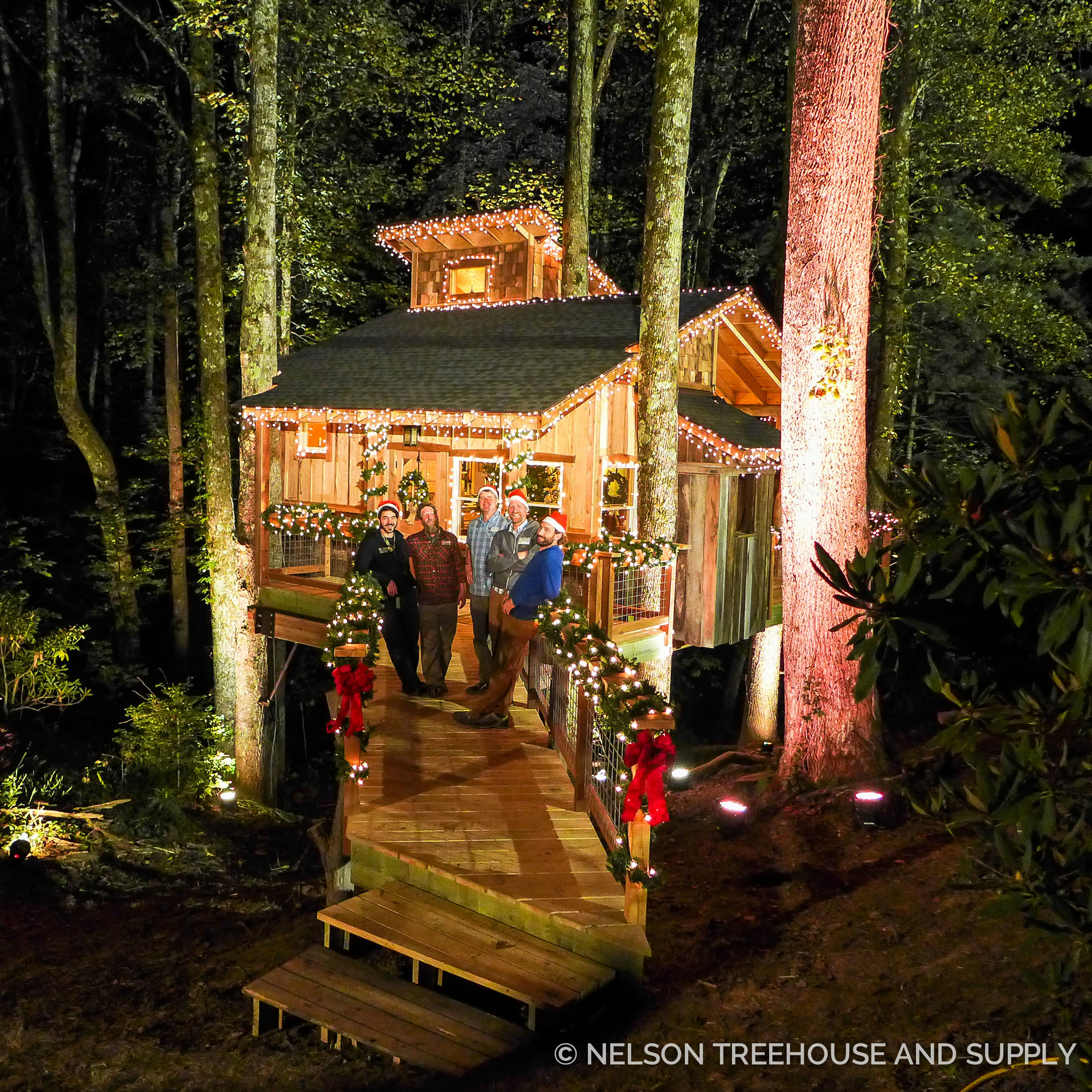 We had the best time building Mike’s treehouse, and wish him many years of fun, rest, and laughter in the trees!

Watching Mike’s Treehouse Masters episode made us so excited for the upcoming all-new season, airing January 6, 2017! Keep up-to-date on fresh episodes and treehouse photo tours by following us on Instagram and Facebook, and subscribing to our mailing list!