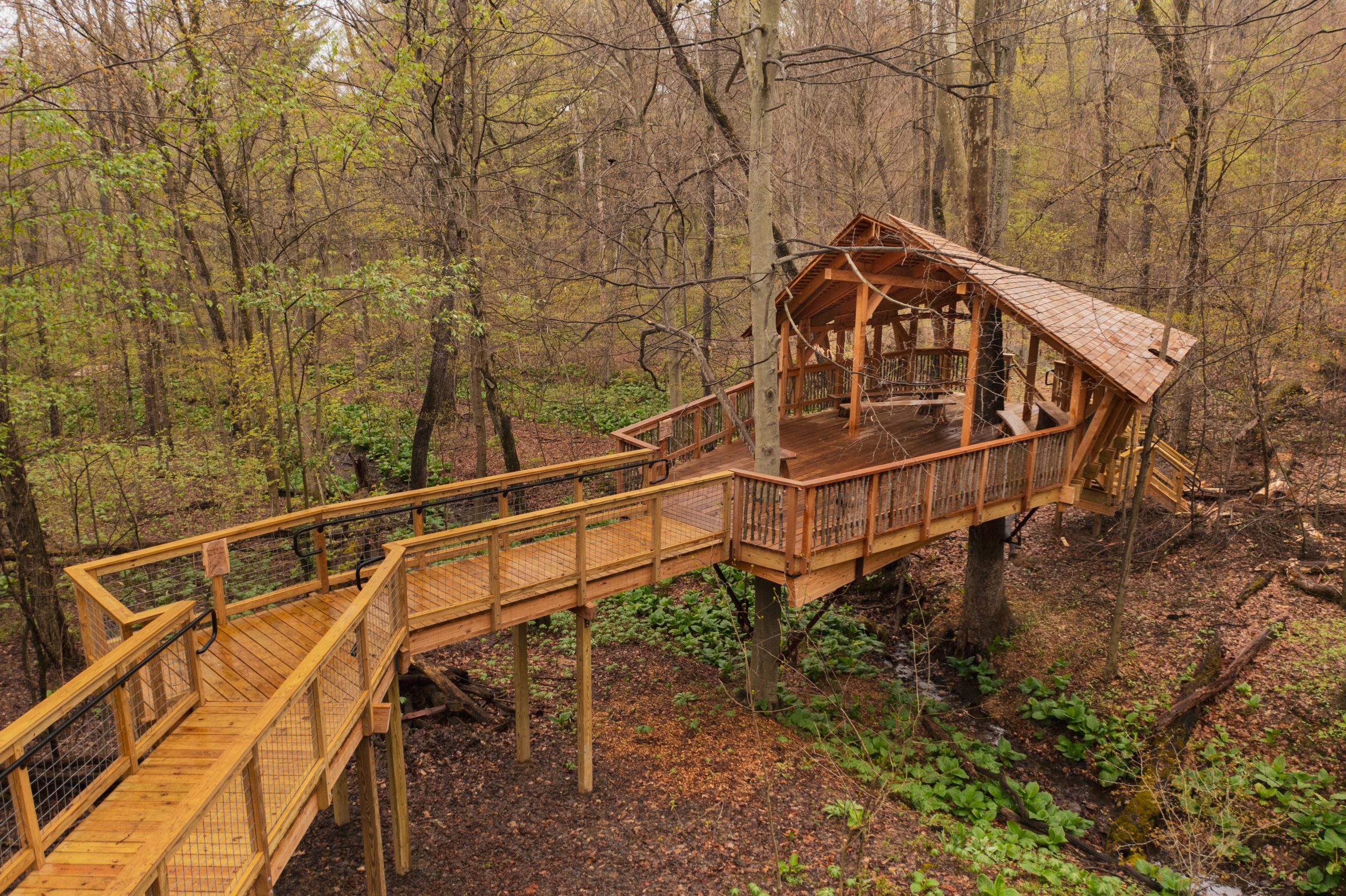 When Chris & Gail Laux reached out to us inquiring about adding a treehouse classroom to their sanctuary we knew we had to say yes to this special project. Not often do we get to build for nonprofits so we were excited to work on this unique treehouse. 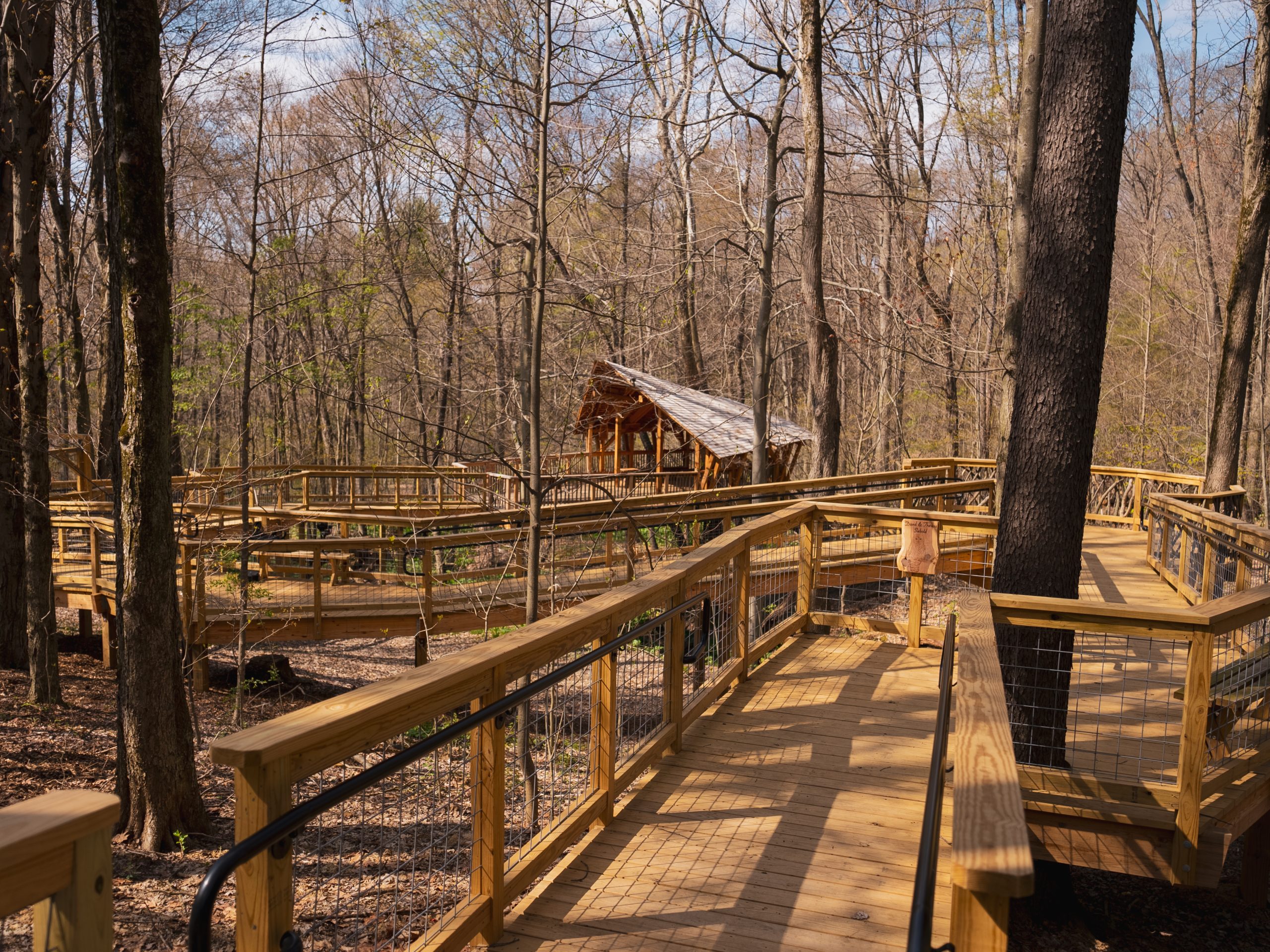 The purpose for this classroom was for educational encounters with the sanctuaries feathered friends! Our Project Manager, Scott Atkins gave us the low down on the concept for this wing inspired treehouse. Our clients envisioned the educational classroom as an open pavilion space where their visitors can experience nature and view wildlife from a birds-eye view but also needed to be fully ADA accessible for all to enjoy the feathered friend encounters. 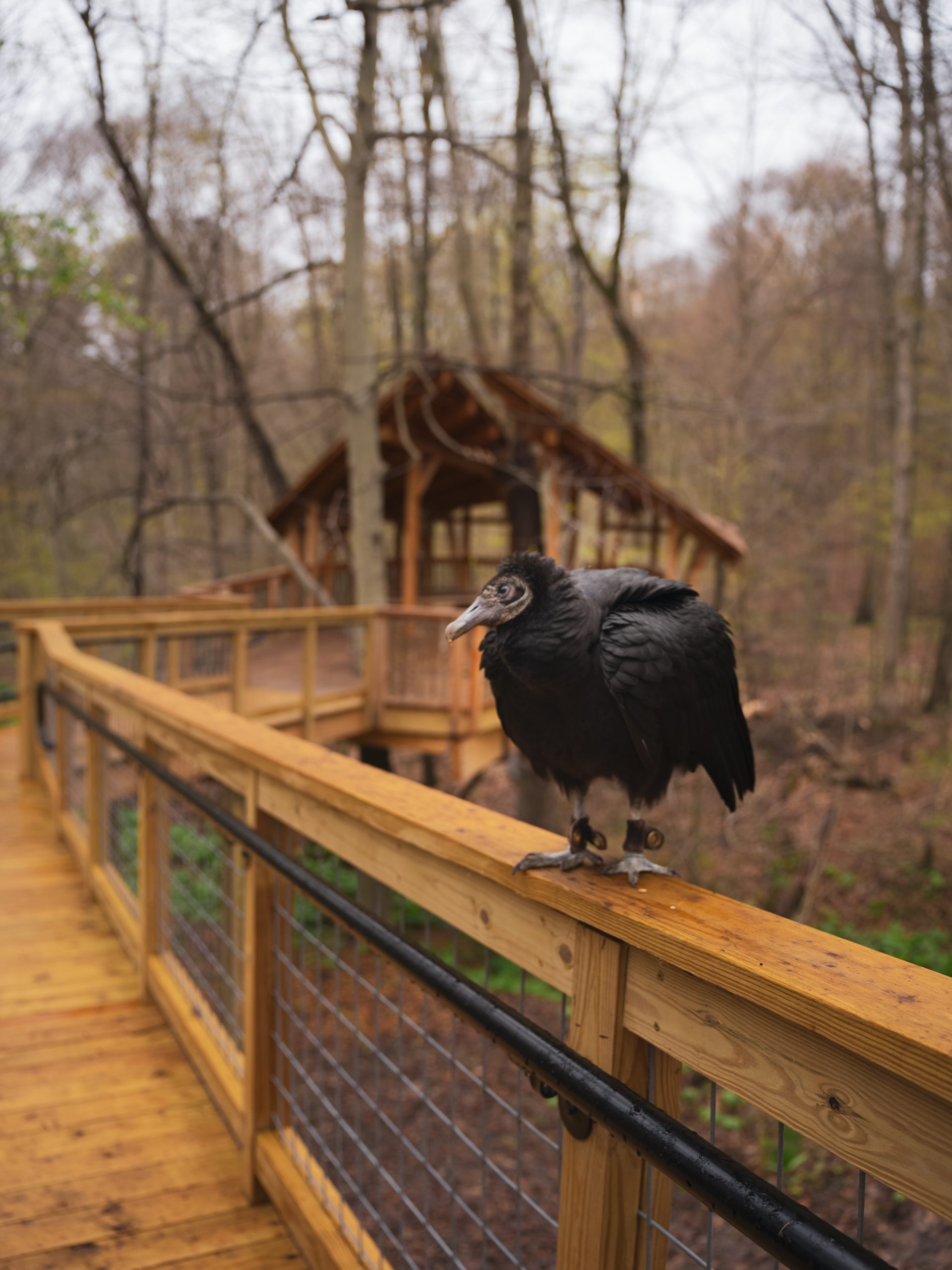 Also “the bird flight really dictated a lot of how the building was laid out” said head Architect, Daniel Ash, since a bird will fly from one point to another during the encounter. Between the buildsite, ADA accessible ramp and bird launch and landing spot the crew had their work cut out for them to design and build this educational treehouse!

Let’s dive into the details of this cool classroom! 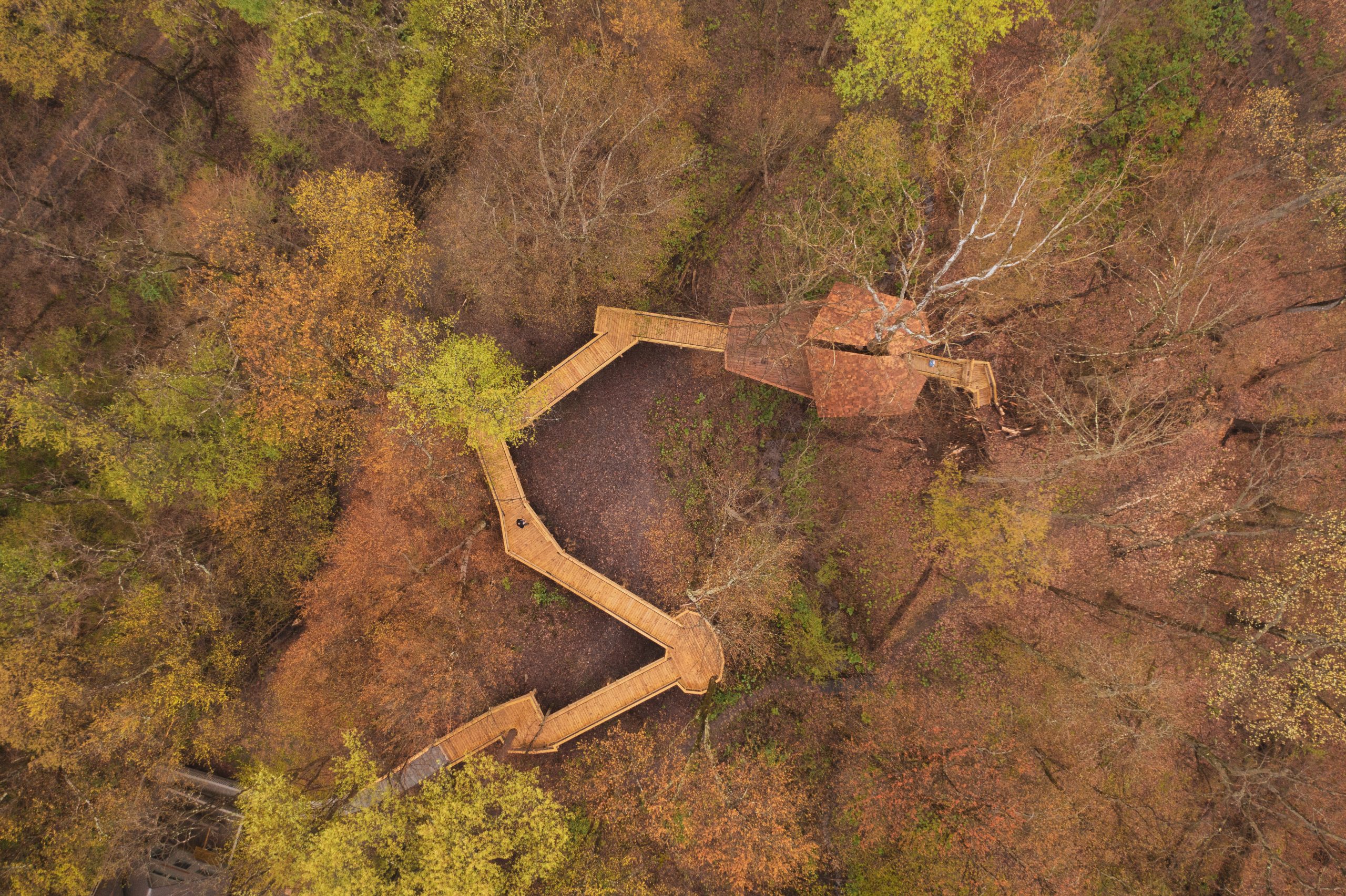 This wing inspired design begins at a 200 ft long ADA accessible ramp weaving through the trees. Supported mostly by posts and 4 trees, this wandering walkway is whimsically wonderful but was definitely the biggest challenge from designing to building. I asked our lead carpenter, Henry Nelson, what the trickiest part of this ramp was, “we had to map everything out to make sure the ramp was ADA compliant as well as fit large footings between roots and trees. Also, the rain did not help.” 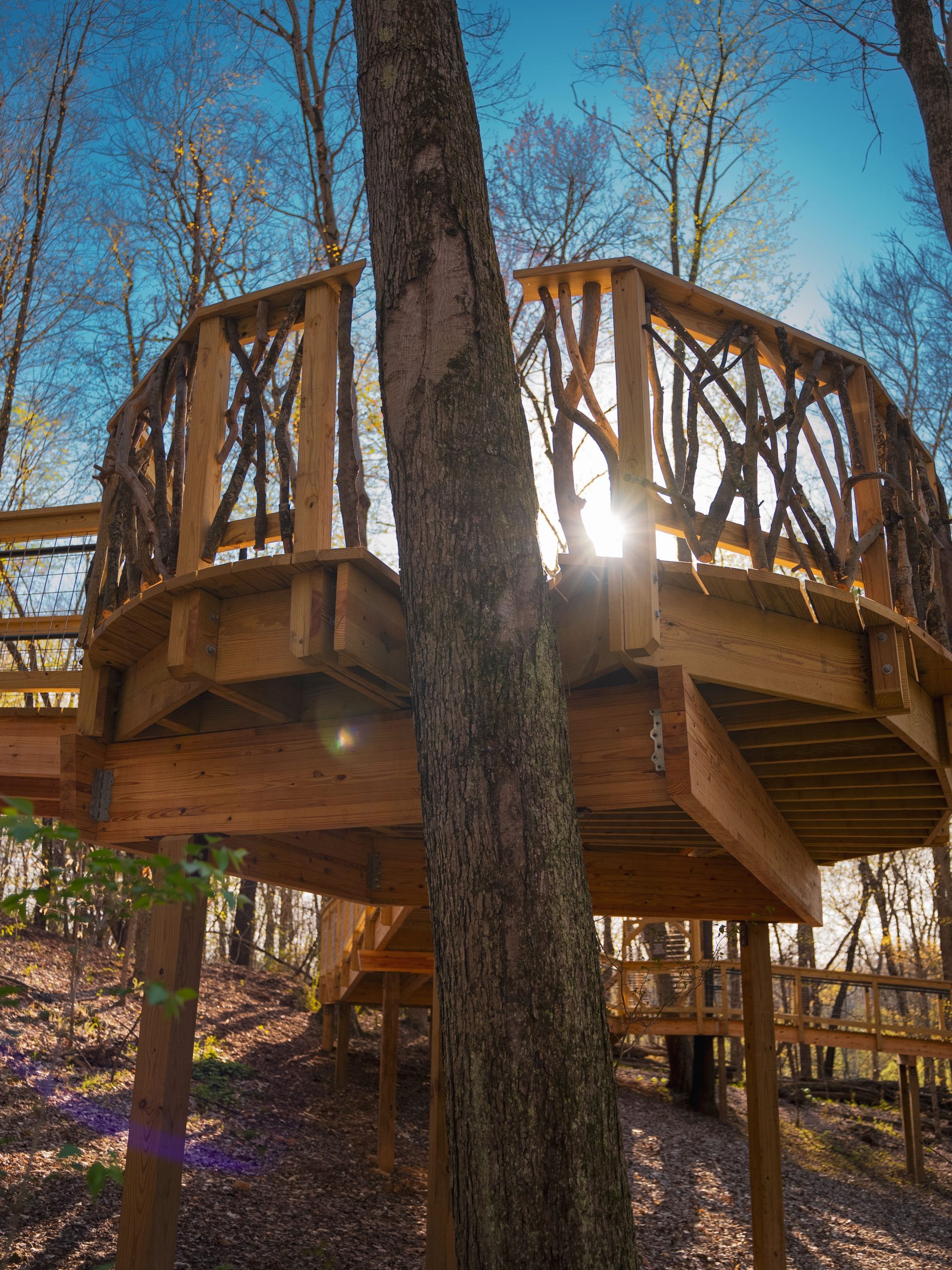 But the crew persevered and created this meandering ramp made out of fresh cedar and branches on the railings to give it an organic and foraged feel. About half way down the ramp rests a small platform aptly named “the nest” created as a launch site for the bird’s feathered encounter flight.

Also made out of fresh cedar, the pavilion is 19 ft off the ground and supported by a 28 ft Sycamore and a 17 ft Beech Tree. 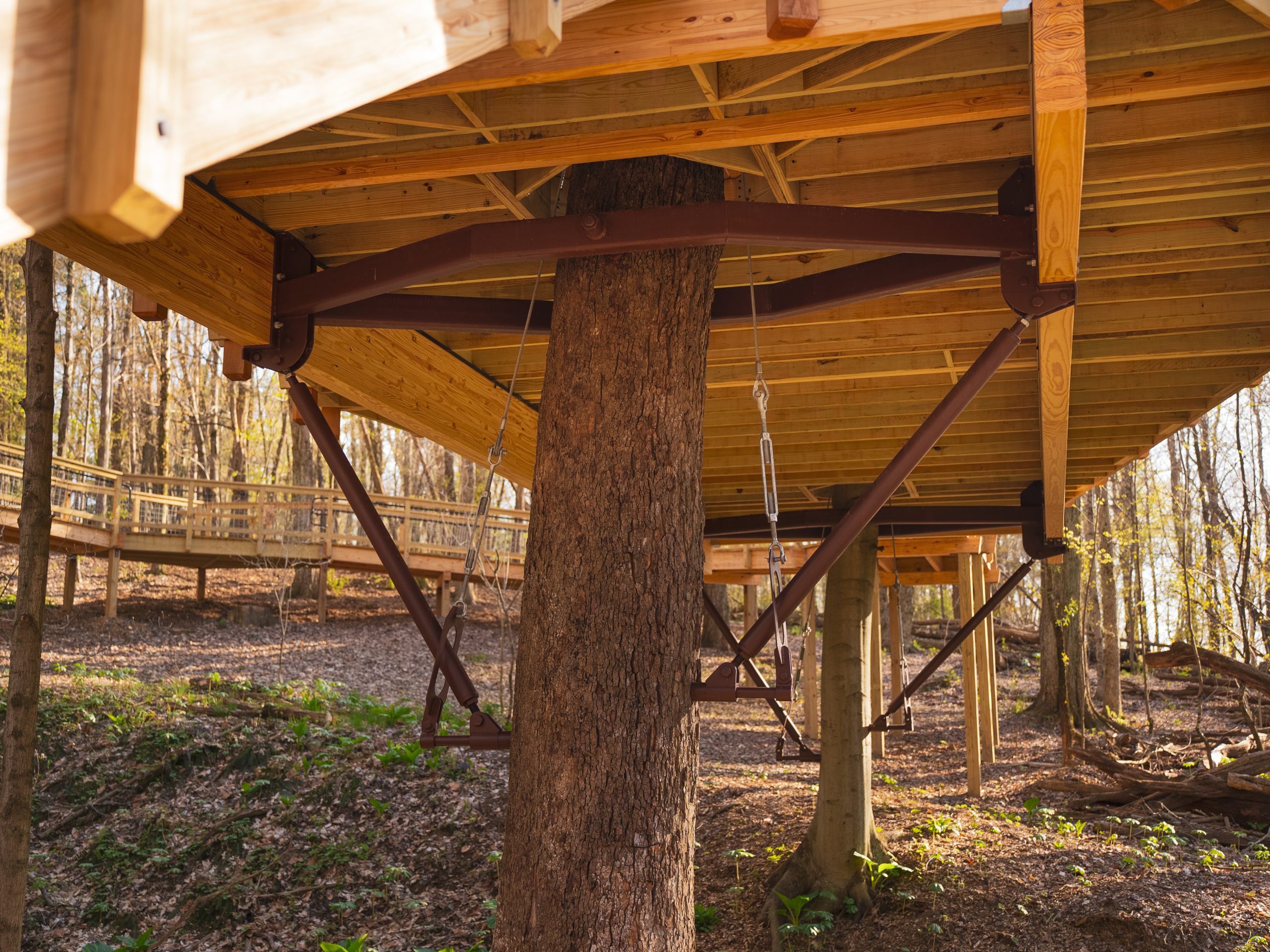 On each tree, we used our burly Heavy Limb Steel Diamond Frame Yoke and Struts to securely hold up this spacious cedar platform. 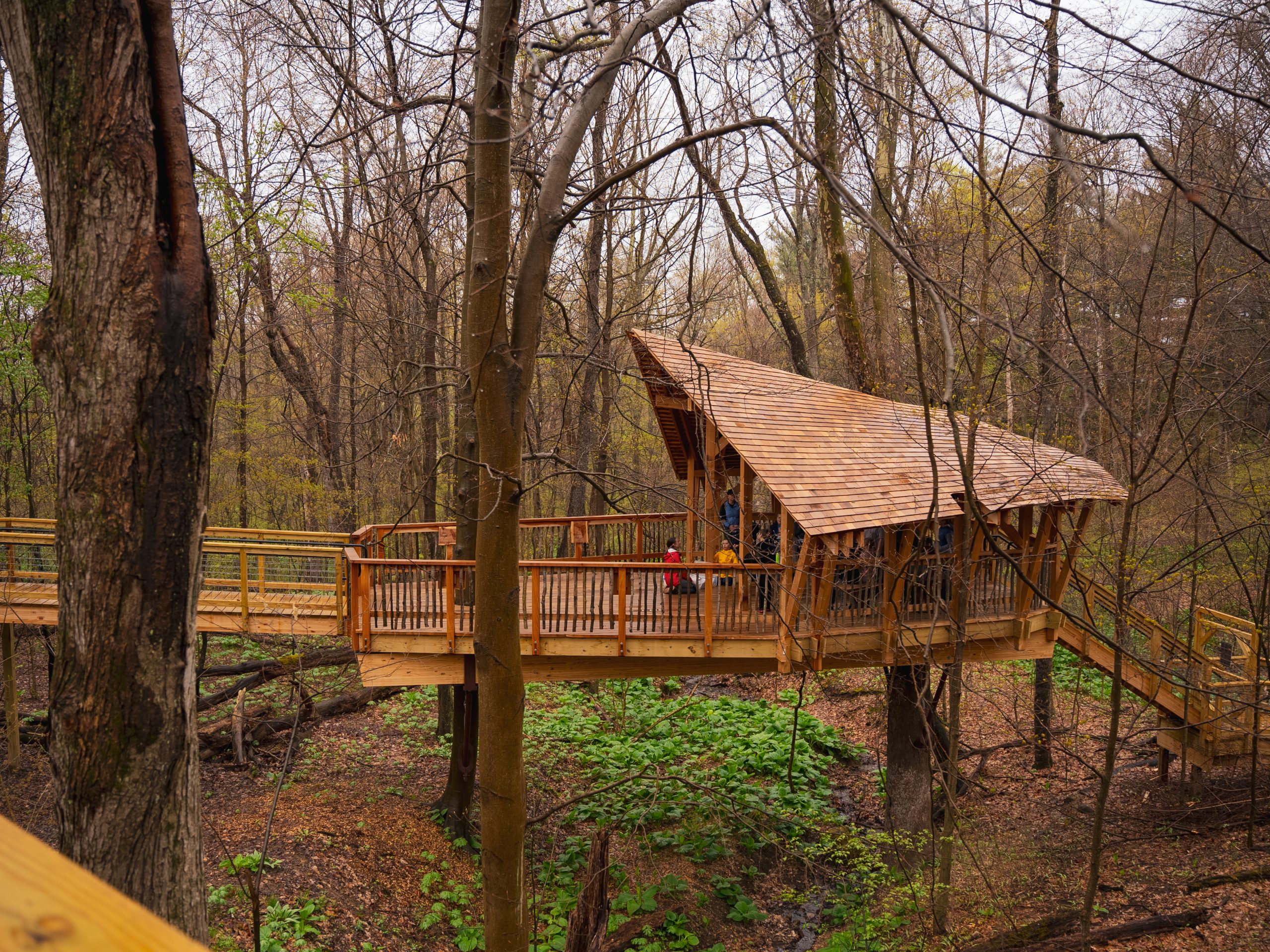 Underneath, an artesian spring fed creek runs between the two trees. “We had to build a small bridge over to the other side and make sure we didn’t drop any of our tools into it,” said Henry. Another challenge in designing the main classroom space Daniel said “was to allow enough coverage to cover from rain but open enough for birds to fly into the pavilion.” Of course, the crew succeeded and crafted this airy space for all to enjoy the bird encounters. 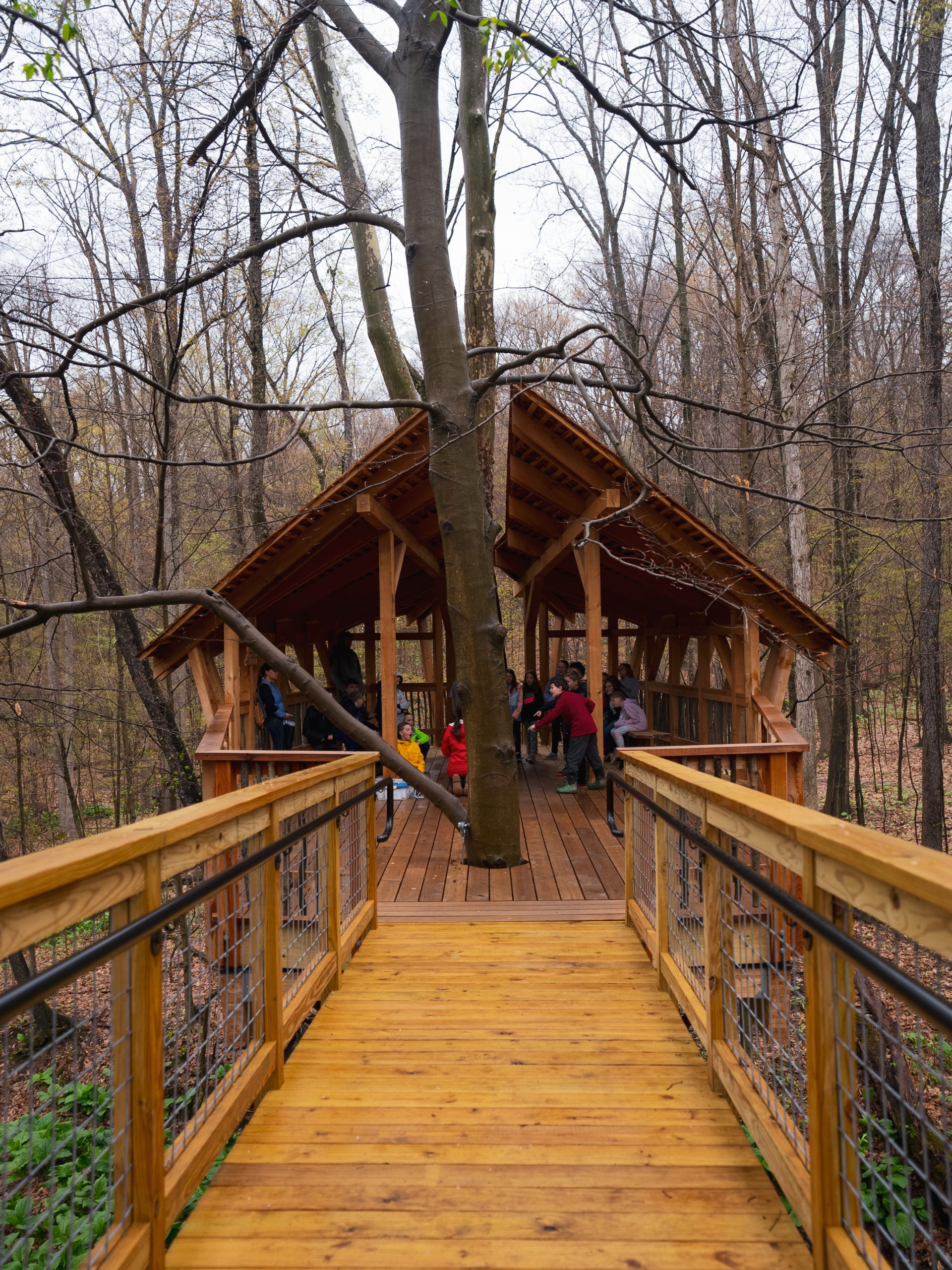 Another cool part of the pavilion is how trees are incorporated in the design. Scott mentioned that “the first tree has a big branch that you can climb over” which amplifies the magic of the trees just as our feathered friends experience in their treetop nests. 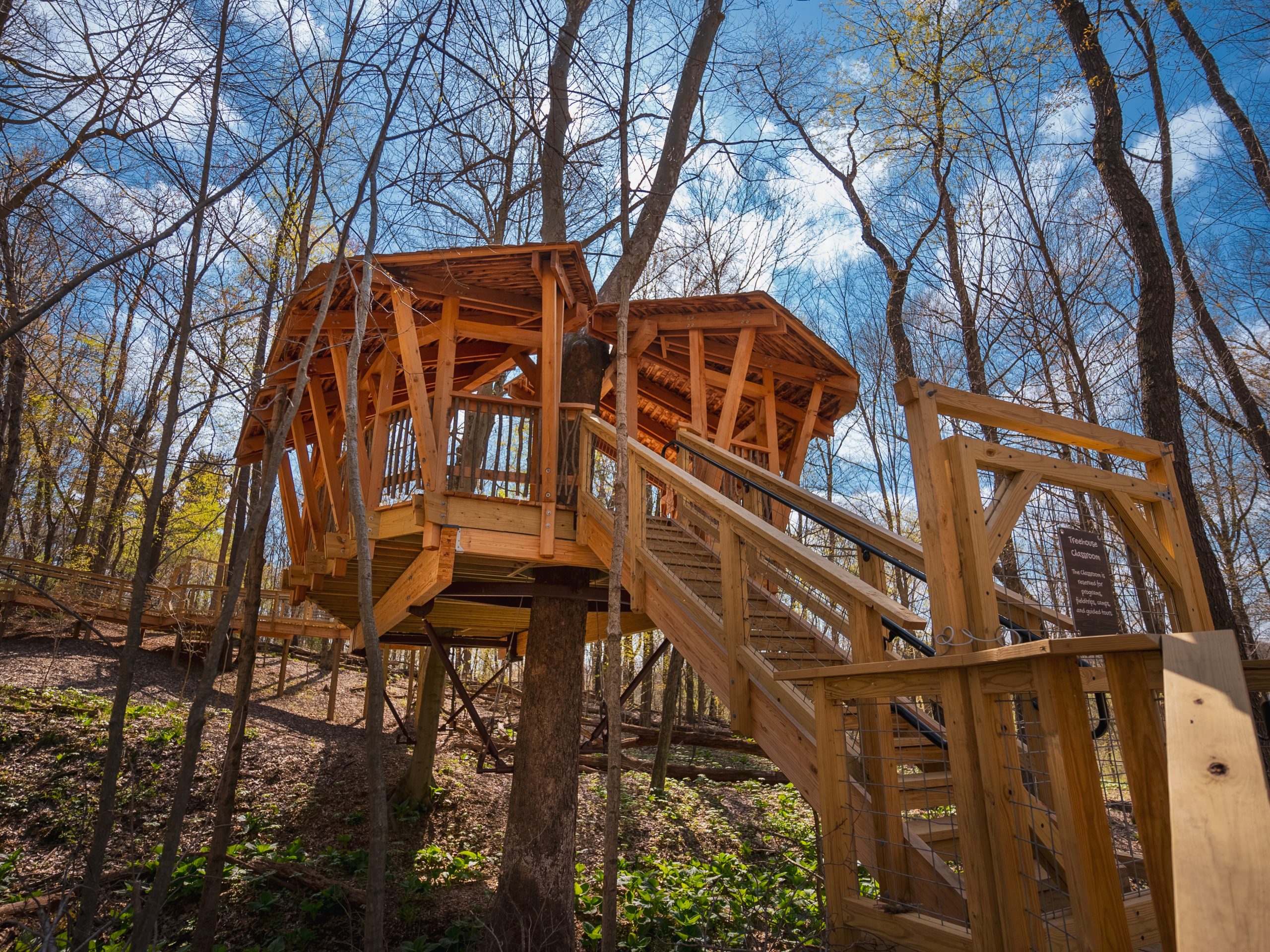 A staircase leads you back down to the forest floor to wander the rest of the trail system and watch for the sanctuaries feathered friends in flight! 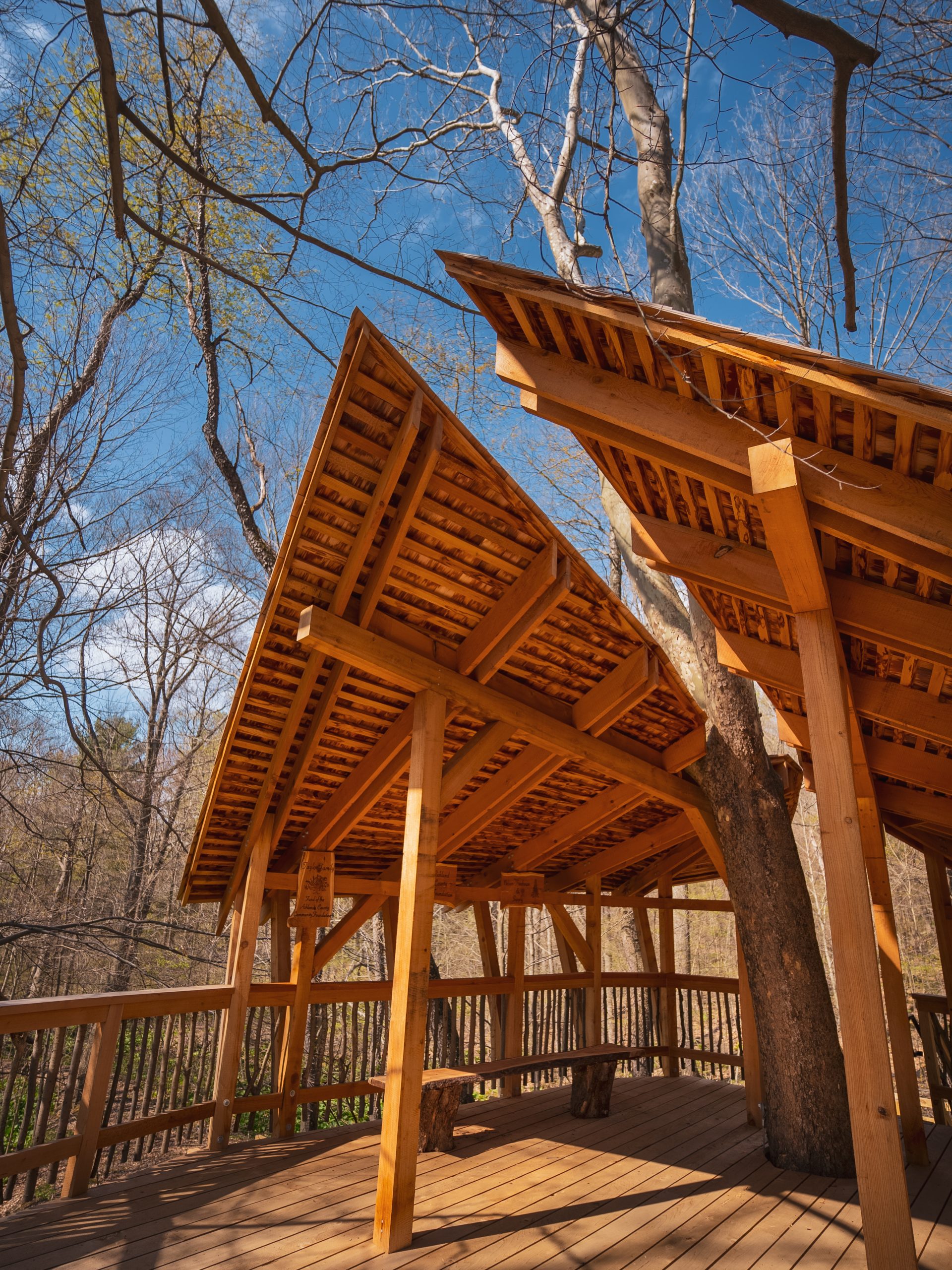 The spanning wing-like roof also crafted out of cedar is the real show stopper. During the design process Daniel had a brilliant thought! “What if the roof acted like bird wings and looked like the structure was actively moving and about to take off” in a rising and twisting flyaway-like motion. Just like the birds soaring through the sky in their feathered encounter flight.

I asked Henry what was unique about the roof and he said it “was slit in the middle, like bird wings, with a tree going through one side. Luckily we have brilliant folks at the shop that can do that math for those rafters, but it was a very unique roof system.” Shout out Daniel designing this soaring roof and to the crew at the prefab shop making these tricky cuts. 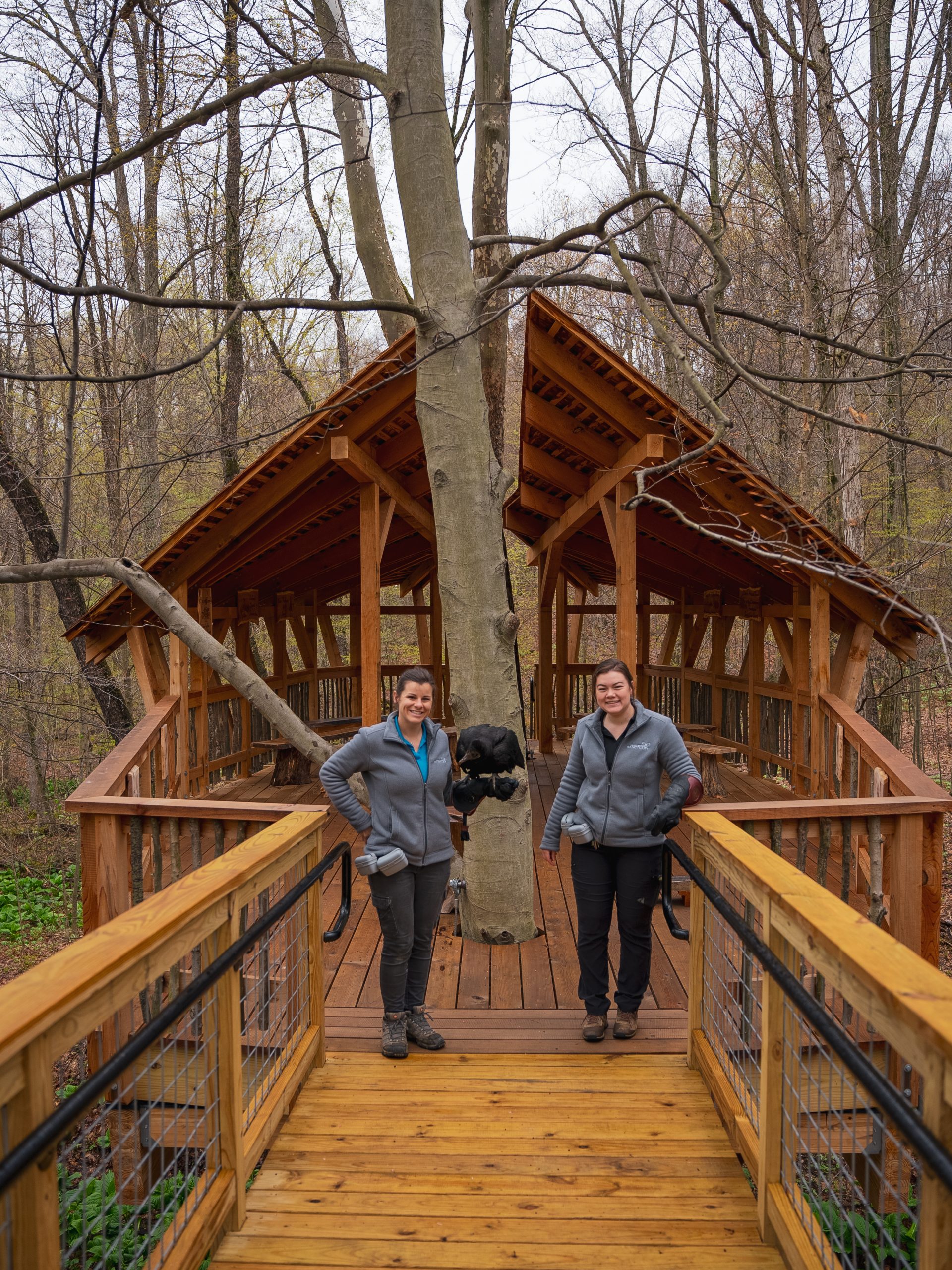 Last but most certainly not least, Scott, Daniel and Henry had nothing but high praises to say about Gail, Chris and the staff members. “I loved the friendly staff that worked at the sanctuary. They were all so nice and excited, and clearly loved what they did. If ever anyone finds themselves near Mansfield, Ohio, I would highly recommend checking out the Ohio Bird Sanctuary. They are amazing people and it’s a very cool treehouse, in my humble opinion” said Henry. You heard it from one of the Treehouse Master’s himself! Next time you’re in Ohio, check out this bird inspired treehouse and support the awesome work our friends at Ohio Bird Sanctuary are doing.

Can’t visit it in person? Check out this virtual tour!